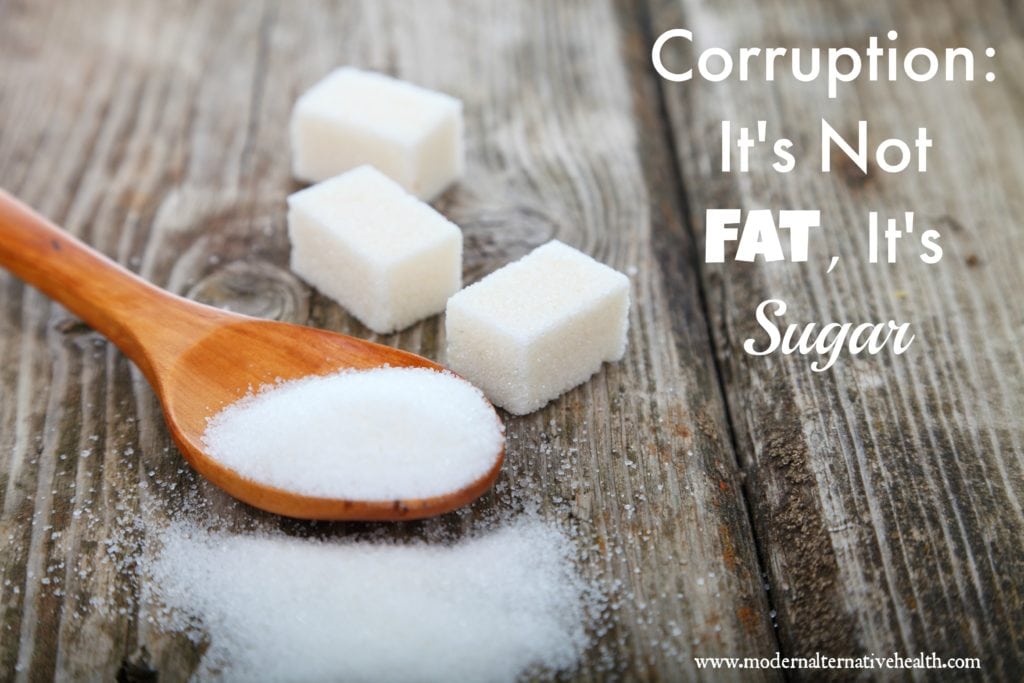 About 7 or 8 years ago, when I was first starting my real food journey, I came across some evidence that fat wasn’t responsible for heart disease or high cholesterol levels; it was sugar.  There was corruption within a lot of the research that had been done on sugar, saturated fat, trans fats, and more.

Of course, the mainstream dismissed this as “conspiracy theory,” despite the early yet strong evidence that this was the case.  No…the government and the doctors want us to be healthy, and they would not tell us something that was not true!  They would not risk harming or killing millions of people with poor dietary guidelines!

Only today…the final, damning evidence has come to light.  And it’s all true.

As reported today in the New York Times, based on the publication of key documents in JAMA, a prominent medical journal, a sugar industry executive paid off a trio of scientists to heavily downplay the role sugar played in heart disease, and point the finger at at saturated fat instead.

The corruption goes deeper, though.

One of the scientists who was paid to produce this “research” was Dr. Mark Hegsted, who went on to become the head of the USDA, and played a key role in drafting the first official Dietary Guidelines.  These guidelines (which recommended to reduce saturated fat in the diet due to a causal link with heart disease) were based upon his faulty, paid research.

Another of the scientists was Dr. Frederick J. Stare, the head of the Harvard’s nutrition department.

These were highly powerful, well-known scientists, who literally set in motion today’s dietary guidelines.  Guidelines that the majority of Americans still believe in, and which has led directly to sharp increases in obesity rates.

There’s a documentary called Sugar Coated that discusses all of this in more detail.

The Truth About Fat and Sugar

When food manufacturers had to reduce fat in their products to satisfy the public’s demand for low- and no-fat items, they replaced it with sugar, to improve taste and texture.

Research into heart disease and its causes has continued.

A 2014 study noted that there is a “significant relationship” between added sugar consumption and mortality from cardiovascular disease.

A 2014 meta-analysis showed an increased risk of heart disease in those who consume sugar-sweetened beverages.

A 2016 study concludes that sugars are more strongly related to heart disease than saturated fats.

There are additional, recent studies on this issue here, here, and here.

Meanwhile, a 2011 study concludes that while saturated fat consumption is associated with a small increase in cholesterol levels, it’s not associated with heart disease — but refined carb intake is.

A 2012 article specifically notes that dietary guidelines to reduce saturated fat in the diet are not based on current available evidence.

There is additional evidence about the role of healthy fats here, here, and here.  (That last one gives a much more thorough review of the history of this issue too.)

The Public Paid the Price

I remember the early 90s.

Everyone was all about “health” food, which meant lots of low-fat and no-fat products, heavily processed foods, olestra (fat “substitute” that was later pulled off the market for causing diarrhea), fake salts (potassium chloride instead of sodium chloride), lots of processed soy, and so on.

Most of the health food was super processed, because there was a perception that scientifically created was better and more nutritious than unprocessed foods.

Since this time (and not only for reasons of diet), we’ve seen an explosion of cancer, obesity, autoimmune disorders, and more.  Our population has gotten less and less healthy.  Many people ultimately “gave up” trying to understand diet trends or healthy eating and just started eating whatever they want.  (One USDA study, cited above, said that over 70% of people just eat whatever.)

It’s scary and sad to think how many peoples’ health has been harmed, and how many people even died, because they thought they were getting the best medical advice and eating the healthiest diet…when they weren’t.  Heart disease patients were sent home eating dry white toast, egg white omelets cooked in non-stick pans with no fat, and so on — and were left starving and seeking high-carb foods to fill in the gaps.

The Government Does Not Have Public Health in Mind

A lot of “science” today is corrupt.  This scandal over the dietary guidelines is hardly unique, unfortunately.  (I wish it were!)  In 2005, a researcher actually published an article that explains why most published research is wrong…and useless.  (Yes, it’s ironic.)

A 2014 article examines why so much of the published medical literature is wrong.  Another 2014 article states it’s been a known problem for more than 20 years!

Obviously, without quality research, governments are basing their findings off random information — it’s all just a shot in the dark, really.  Of course, it’s even worse when the research they’re using has been deliberately manipulated, as in the case of the sugar-heart disease connection.

This happens more than we know, though.

There are so many factors at play.  First, there’s the simple fact that all researchers are humans, and humans make mistakes.  They also have their own biases (everyone does, no matter what, even if they are trying not to).  When things involve humans, there are going to be issues.

Then, there’s the fact that many studies are industry-funded, which can be good (industry is motivated to get studies done that might not otherwise get done), but also can be bad (industry is likely to favor positive results and may fund studies that are designed in such a way as to prove what they want them to prove, skewing the available data).

It gets pretty messy when you get these factors together!

It becomes hard to know who or what to trust.  Most of us feel this way.

This is going on with vaccine research, too.  One known issue of corruption is covered in the movie Vaxxed: From Cover Up to Catastrophe.

If there are this many issues…shouldn’t we ask where the rest of them are?  We should never blindly trust these recommendations, this “science,” and believe that the government (or doctors, or nutritionists, or…) wouldn’t tell us something that wasn’t good for us.  It’s just simply not true.  We saw this with the tobacco issue, too — doctors recommending specific cigarette brands and a long-standing fight that cigarettes did not cause lung cancer, years after the evidence was in that they did.

It’s so important to think for yourself and to look at all the available information…especially the information that most people don’t read.  Because I chose to do that, I knew the truth about sugar and fat and heart disease years ago, when the mainstream was still denying it.  Now, it’s mainstream news, it’s been admitted.  It’s not a “conspiracy theory” if it’s proven correct.

Be cautious.  Be skeptical.  Ask more questions.  This stuff matters, everyone.  Because if you don’t think for yourself, it could be your health, or a loved one’s health, that suffers.

How do you feel about this news?  Do you trust the government or most medical research?