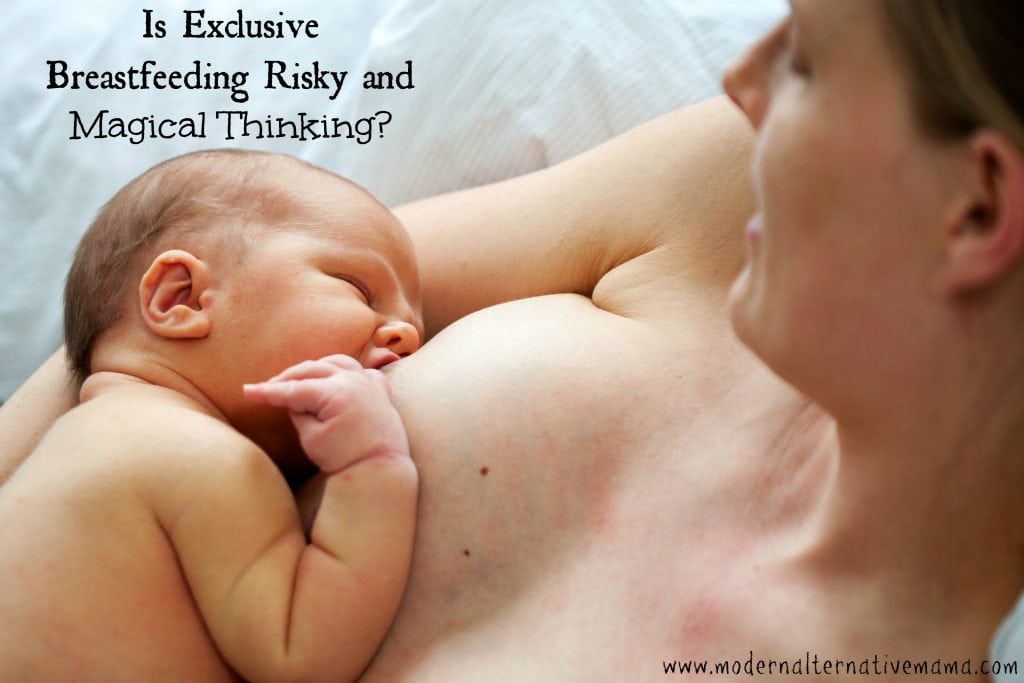 A new article came out recently, which said that exclusive breastfeeding is “magical thinking” and that we are not adequately preparing new mothers for the realities of feeding newborns.

The author goes on to explore her own story — her child appeared to be nursing well on the first couple days of life, and was having the expected amount of wet and dirty diapers, but became very fussy.  After four days, they discovered that baby was hungry and mom wasn’t producing well, and then that she wasn’t producing at all.  By that time, baby had become severely hypoglycemic and dehydrated and ended up suffering brain damage from it.

The tale is a cautionary one: the author states that up to 20% of newborns are vulnerable to under-feeding and the severe effects that can come from it and that it happens almost only in exclusively breastfed babies.  Therefore, she concludes that the current breastfeeding education is inadequate, monitoring of at-risk newborns in inadequate and that the idea that exclusive breastfeeding is the best/healthiest way is based on a naturalistic, magical-thinking point of view.

There has been a trend, recently, for people — typically medical professionals, which this mother is — to call out the “natural” way of thinking as a fallacy, and refer to it as “magical thinking.”  Their opinion is that people who lean to the natural side of things tend to see natural as good by default and ignore or avoid anything that is “unnatural” because it does not fit their worldview.

There was another “study” awhile back, stating that we should no longer refer to breastfeeding as natural, because mothers may associate natural with good, and unnatural with bad, and therefore, refuse vaccinations because they are unnatural.

It’s really unhelpful rhetoric, that misunderstands the point of view of many of these mothers.  Every worldview is extremely complex and based on a number of factors and experiences.  To pretend that another’s view is necessarily limited simply because they disagree is wrong.

Most mothers understand that “natural” is not always good, and not even always possible or desirable.  However, they lean towards the biological norm whenever possible, and move away from it if/when it becomes necessary.

This is in opposition to what others do, which is to accept interventions much more readily, or even to see some of them as specifically beneficial or ‘better’ than natural options.  (This is the type of thinking that led to artificial sweeteners being considered better/healthier than sugar in the 80s and 90s, and formula being considered superior to breastmilk in the 50s.  It’s not a new way of thinking.)

Let’s set this aside, though.  It’s not going to do us any good to fight over whose worldview is “right” or the language that is used here.

What is Happening to These Babies?

The author brings up an important subject.  Some babies are currently slipping through the cracks when it comes to healthy feeding practices.

These mothers are being told that exclusive breastfeeding is the best option (and it is) and that they just need to wait a little longer for their milk to come in.  Some of these babies are truly not getting enough to eat, and are not able to keep their glucose levels stable, and can be at serious risk.

But, rather than jumping to “let’s medically manage this,” let’s ask some more questions.  Why is this happening?  Why are up to 20% of babies at serious risk?  Why are so many mothers not producing milk, or having their milk supply delayed?  Something is happening here, and we need to understand what it is, and how we can address it.

A healthy, full-term newborn is born with enough fat stores to keep themselves healthy, despite low milk intake, for the first 1 – 2 days.  It is very normal for hours-old babies to take in only tiny quantities of colostrum.  The only babies who are going to struggle with blood sugar issues here are going to be preemies, babies born to diabetic mothers, large-for-dates babies (not all of them), and babies with metabolic issues or conditions.  Typical, full-term newborns will not.  These risks resolve, usually, in 12 – 36 hours.  (source)

One study found that when babies breastfed soon after birth, and very frequently in the first 24 hours, mother’s milk came in sooner and breastfeeding was more successful.  First-time mothers, mothers with gestational diabetes, insulin use, and maternal age were linked with lower milk production.

This study says that disruption of a mother’s circadian rhythm, which is related to hormonal disruptions, can delay milk supply.

This study shows that up to 44% of mothers can experience delayed lactation — I believe this was cited in the author’s original post.  What the author didn’t dive into was the causes, but the study does.  Six factors are related to delayed lactation, including maternal age of 30 or older; being overweight or obese; larger-than-average baby weight (greater than 7.9 lbs); absence of nipple discomfort on days 0 – 3; and infant failing to breastfeed effectively at least twice in the first 24 hours.

So we see that the issue that original author raises is real — delayed onset of lactation increases the likelihood of infants losing weight, having higher jaundice levels, and being at risk for dehydration and even brain damage.  But we’ve also learned that the causes are important — higher maternal weight, advanced maternal age, being a first-time mother.

Currently, many women are overweight and are delaying first-time motherhood until at or after age 30.  That’s three risk factors right there.  It’s no wonder that we’re seeing an increase in women who are struggling to produce milk!

How Do We Help the Babies?

The first thing we need to do is focus on the risk factors.  It does us no good to say, “Well, this seems to happen, who knows why, so let’s just manage/treat all babies.”

These are things that, sometimes, we can adjust for.  Mothers with known hormonal imbalances (thyroid disorders, PCOS, difficult menstruation, infertility, etc.) can seek care prior to pregnancy or during pregnancy to address this and work towards a healthier hormone profile.  That is not easy, but it is one way to mitigate that risk factor.

A healthy diet and light to moderate exercise can help to reduce the risk of overweight or obesity, helping to mitigate that risk factor.

Many women simply choose to wait until their 30s before having babies, and that is their choice (usually — sometimes infertility or other factors get in the way).  Many will not have difficulty, but this age group is more likely to, so they should simply be aware of their risk factors.

Once a baby is born, lactogenesis II (onset of milk production) is triggered by the placenta detaching and passing, usually within an hour of birth.  Milk actually starts to be produced between 30 and 40 hours postpartum, typically, and milk is noticeably “in” (woman notices fuller breasts) within 72 hours.

If a woman has known risk factors, then she or her partner should be aware of what to look for in terms of milk production, to make sure that all is going well.  If something is hormonally wrong, then “breastfeed more often” is not going to be a solution.  Although, breastfeeding effectively within hours of birth is associated with increased success, so continuing to try is important.

Signs of issues include:

If any of these are present, then obviously, getting the baby fed one way or another is most important.  It is still possible for many women to make breastfeeding work, but the usual “just keep nursing” may not the best approach at this moment.

Instead, mothers can try:

If an emergency exists, where mom is not producing milk, and baby is showing signs of distress, feeding the baby is the most important thing.  Then, mom needs to get help to figure out why she’s not producing milk yet and what to do about it.  Needing to supplement in the early days does not mean that breastfeeding will fail or that moms should give up.

(On a personal note, I struggled to breastfeed my own daughter as a first-time mom.  She latched fine for the first few days, but once my milk came in, she didn’t.  We had one day where she struggled and eventually just cried until a doctor told me to give her formula.  I did, then I cried.  I bought a pump the next day and pumped for her for 6 weeks until we were able to figure it out and get her to latch correctly.  But I did, and we went on to breastfeed for more than four years.  Struggling and supplementing is not the end of the world.)

How Do We Deal With This Information?

We must take a cautionary approach.

I was turned off by the original author’s suggestion that we ought to be “alarmed” by this, and her refusal to take into consideration any risk factors that may have played a role in what happened.  Additionally, although she was in a postpartum haze when her son was struggling, at the point when he had lost 15% of his birth weight, someone should have stepped in and let her know that this was a serious risk and that he needed to eat now.  I’m not sure why that didn’t happen, but it might have changed the outcome.

It’s important not to let information scare us.  It’s important not to walk away with only “some” of the facts.  We need a clear and more complete picture of what is happening so that we can identify at-risk moms and babies, and take measured steps to prevent these outcomes or to intervene if they occur anyway.

Let’s do a better job of keeping moms and babies healthy, by promoting a healthy diet, by addressing underlying health conditions, and by monitoring at-risk mothers and babies and intervening only if and when necessary.  We can better balance ‘natural’ and ‘medical’ this way, and mitigate the risks to all.

How do you feel about this information on exclusive breastfeeding?