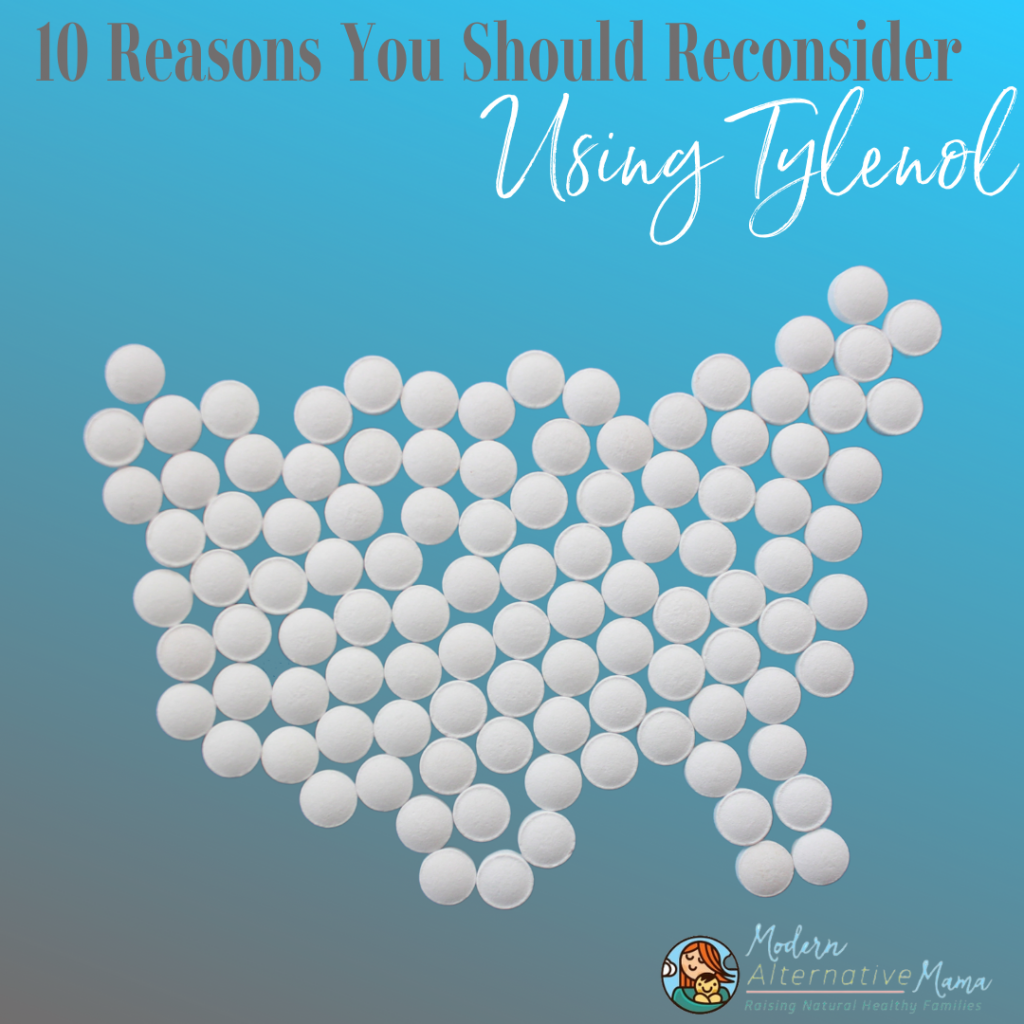 10 Reasons You Should Reconsider Using Tylenol

Tylenol (acetaminophen) has the reputation of being safe and gentle, and it’s the go-to conventional medicine for almost everything. The truth is, that acetaminophen is not as safe as we’ve been told. Several serious health concerns are directly related to the use of this medication, especially for pregnant women and children.

Acetaminophen is a medication used to alleviate mild to moderate pain from ailments such as headaches, muscle aches, menstrual cramps, colds, sore throats, toothaches, backaches, and fevers. This may seem great, but do you know at what cost the relief comes?

10 Reasons You Should Reconsider Using Acetaminophen

Acetaminophen was approved during a time when they’d give a large dose (in a short period of time) and see if it was lethal. If not, it was considered “safe.” It wasn’t until the 1960s that the FDA was empowered to require clinical reviews (2). Medications like acetaminophen didn’t go through modern safety tests, which are sometimes still inadequate. Some experts believe it wouldn’t be granted if it were up for new approval today.

Back to the drug itself.t is a pain killer linked to an increased risk of health problems when used long-term or in larger doses. Although acetaminophen is considered “safer” than nonsteroidal anti-inflammatory drugs (NSAIDs), there are still many risks associated with this specific over-the-counter medication (3).

Acetaminophen overdose is the leading cause of calls to poison control centers in the United States, responsible for more than 56,000 emergency room visits and 2,600 hospitalizations. Acetaminophen is responsible for about 500 deaths yearly due to acute liver failure (4).

Even the FDA has warned that there is a high risk of overdosing on acetaminophen and that it is extremely dangerous. You may think there is no way that you would allow your child to overdose on something like this, but the reason it happens is real.

Back in the day, infant formula medications were much more concentrated than children’s. If you gave the wrong dose of the formula, you could have caused an overdose and not even realized it. Today, this is not the case. They’ve since changed all children’s/infant formulas to 160 mg/5 ml because this was an issue.  But it happened in the past.

Nonetheless, many combination drugs sold for coughs and colds already contain acetaminophen, and parents may not realize it. In this case, an overdose may occur if separate doses of acetaminophen are given in addition to the combination medication. All it takes to overdose on acetaminophen is 2x the normal dose.

“An April 2011 report from FDA’s Center for Drug Evaluation and Research (CDER) found that confusion caused by the different concentrations of liquid acetaminophen for infants and children was leading to overdoses that made infants seriously ill, with some dying from liver failure.”

Over half of all acute liver failure cases in the United States are due to acetaminophen overdoses (5). One study found that heavier use of acetaminophen was associated with an increased risk of end-stage renal disease (6). End-stage renal disease is also known as kidney disease, which occurs when there’s a gradual loss of kidney function or chronic kidney disease (7). Yet the Tylenol website claims:

The reality is that acetaminophen can be toxic to your liver even at recommended doses when taken daily for just a couple of weeks. As you would imagine, that risk is even higher for children. The scary thing is the amount it takes for liver damage to occur. The margin between a safe dose of acetaminophen and a potentially lethal dose is surprisingly small.

The body’s master antioxidant, known as glutathione (9), is often diminished when you take acetaminophen due to toxin build-up and damage to the liver (10). Glutathione helps protect cells from damage caused by free radicals. The buildup of free radicals has been linked to chronic diseases, such as cancer and heart disease (11). Interestingly, immediate administration of N-acetylcysteine (NAC), the precursor to glutathione, can prevent mortality from acetaminophen toxicity (12).

Several recent studies have also highlighted the influence of acetaminophen and cardiometabolic risk. Cardiometabolic risk is a person’s chance of having a cardiovascular event such as a heart attack or stroke (13). One study, published in 2017, found that those taking opiates (some of which contained acetaminophen) were 95 percent more likely to be obese and 63 percent more likely to have hypertension (14).

Researchers have established an affiliation between acetaminophen and asthma. A 2009 systematic review and meta-analysis discovered that the probability of asthma increased with previous acetaminophen use in both adults and children (15). Moreover, prenatal exposure to acetaminophen also heightened the risk of asthma in the child, possibly due to increased oxidative stress during pregnancy (16).

New research suggests that pregnant women who take acetaminophen may be more likely to have a child with asthma (17). Another article states that this does not change the recommendation for acetaminophen being the safest pain-killer to take during pregnancy (18), which is absurd, in our opinion. The findings seem straightforward; the asthma rates in these children were not related to the underlying health condition but to the use of this drug. Acetaminophen may pose less risk than ibuprofen or aspirin, but does that still make it safe?

#6: May Have Neurodevelopmental Consequences During Pregnancy

Acetaminophen is currently marketed as safe during pregnancy. However, acetaminophen use may have neurodevelopmental consequences for the fetus. A 2016 study followed more than 2,000 mother-child pairs from the first trimester of pregnancy and performed several behavior tests when the children were about five years old (19). Better yet, according to WebMD:

“New research shows that women who took acetaminophen, best known as Tylenol, at the end of their pregnancies were much more likely to have a child with attention-deficit/hyperactivity disorder (ADHD) or autism (20).”

Acetaminophen is also linked to rare but severe skin reactions such as Stevens-Johnson Syndrome and toxic epidermal necrolysis. These reactions can be fatal. Between 1969 and 2012, there were 107 such cases, of which 67 required hospitalization and 12 people died. In 2013, the FDA issued a warning and mandated that skin reactions be listed on acetaminophen-containing drug labels as a potential adverse effect (21).

Exactly how acetaminophen causes these potentially fatal skin reactions is unknown, but particularly alarming is that they can occur even if you’ve taken acetaminophen in the past without any problems.

Researchers at Ohio State University wanted to determine if acetaminophen affected emotional processing. They found that participants who took acetaminophen:

#9: Is An Endocrine Disruptor

Acetaminophen is an endocrine disruptor. In a 2016 study, rats that received acetaminophen had female offspring with fewer eggs, smaller ovaries, and smaller litters when they reached reproductive age. Male offspring had fewer sperm progenitor cells early in life, but these returned to normal by adulthood. Particularly concerning was the effect it had on the next generation. Granddaughters of the rats given acetaminophen were also found to have smaller ovaries and stunted reproductive functionality (25).

Researchers have also found an association between acetaminophen and cancer. A 2013 meta-analysis of epidemiological studies found that acetaminophen was associated with a significantly increased risk of kidney cancer (26). This risk is quite shocking since, according to the Tylenol website:

“The National Kidney Foundation recommends acetaminophen, the active ingredient in TYLENOL®, as the pain reliever of choice for occasional use in patients that have underlying kidney disease (27).”

Yet, according to Moffitt Cancer Center:

“Now acetaminophen is making headlines because California regulators are considering labeling it a carcinogen. It is part of the state’s Proposition 65 law requiring California to warn consumers of any products known to cause cancer, birth defects or reproductive harm (28).”

Now that you know the risks, the question is, what can we use instead? The answer to that question depends on why you want to use it.

An everyday use of acetaminophen is as a fever reducer. First, consider that a fever isn’t really a bad thing; it’s the body’s natural way of fighting infection. Reducing a fever may not be in your best interest, which is discussed in-depth here.

Of course, the other common reason for using acetaminophen is pain. Again, a suitable natural alternative will depend on the reason for the pain you or your child is experiencing. Everyday bumps and bruises or external trauma can benefit from arnica.

There are probably hundreds of reasons why people take acetaminophen. It’s recommended so much that our culture almost sees it as a cure-all drug. With everything I know about this drug’s risks, I can’t even entertain the thought of taking it or giving it to my children. It makes a lot more sense to look at why acetaminophen is being recommended and then use a natural remedy that suits the situation’s needs.

Some of our acetaminophen alternative recommendations include:

What natural alternatives to acetaminophen do you use?

Roxanne
Roxanne and her family live a holistic lifestyle, eating healthy whole foods, practicing yoga, and using natural remedies and alternative medicine. After a career in the fashion industry in New York, Roxanne went back to school and was trained as a Certified Holistic Health Coach and started her own business helping other moms to create their own holistic lifestyle. On any given day Roxanne can be found cooking and creating delicious healthy recipes, creating handmade natural beauty products, practicing yoga and meditation, learning about the latest information on nutrition and health, or having fun with her daughter and husband. Read more from Roxanne on her blog The Holistic mama
AD