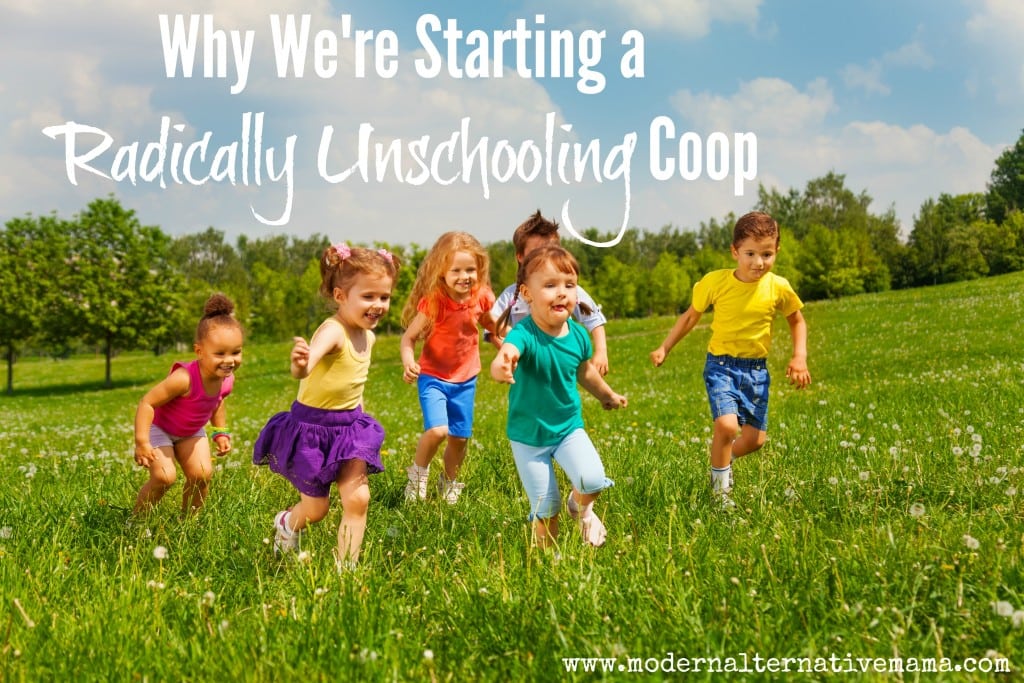 A little over two years ago, I had an idea for an unschooling-themed coop.  There was already one in my area, but that group met once a week, all day, and offered classes that seemed awesome for teens and tweens — and not a great fit for my family (which, at that point, consisted of 4 kids from age 10 months to age 6).

I really had no idea what I was doing.  I didn’t know what my family would need, educationally.  I didn’t really know what our options were.  I tossed my general ideas out to a bunch of different local people, started talking to them, and we formed a leadership team to create the coop.

The leadership team changed hands several times.  The coop grew.  The form and structure we put in place, stuck.  Many families were happy with it.

But I realized that I wasn’t, and neither were my kids.

A handful of months into our second year, my kids started complaining.  This year had more structure than the previous year.  They had to choose classes, and were expected to be in those classes and paying attention.  There was no option to ‘not’ go if they didn’t like the offerings during one session.  There was no real break time.  My kids didn’t like having to go to specific classes.  They asked to do something else.  Or leave.

I don’t like fighting with my kids over things that are completely unnecessary.

Yes, I have hard-and-fast rules about car seats and seat belts in the car.  Yes, we make careful choices about food.  Some things, almost exclusively health and safety issues, are simply what they are.  If it’s not one of those issues, I don’t choose it as a battle.

Part of the reason we are homeschooling, and unschooling, is so that learning isn’t a battle.  This group was no longer making sense for our family.

It was tough to choose to walk away, but the other group members mostly were happy with how it was.  Some even wanted more structure.  (The group offers parent-led crafts and activities, weekly themes, and more in a hands-on way.  Many parents let us know that they enjoyed the structure and used the themes for at-home extensions, where they learned even more about the topics.)  That’s all well and good…for them.  But not for me.

I did a lot of educational research, looked into Sudbury schools a lot, talked to my kids.  I asked if they’d rather have a different style group, where they had more freedom — or if they’d rather just stay with their friends.  Both my older two said they’d rather have the group with more freedom.  (Pretty neat that they chose what works for them instead of only thinking of friendships!  That’s the kind of stuff I want to encourage.)

Another mom and I decided to start a new, true radically unschooling coop.

It’s radical, for sure.

The group has no classes.  No teachers.  No curriculum.  No grades or groups.

The kids themselves get to choose everything.  We provide the space, time, and materials, and they do the rest.

We aren’t separating kids by age level.  We’re not even differentiating between preschool and elementary.  We will be offering them a wide variety of art supplies, craft/sewing supplies, computers, board games, blocks, Legos, cooking/food, woodworking, outdoor toys, etc. and they will be allowed to do whatever they want — in groups of their own choosing, or independently.

There are no arbitrary rules.  The kids are allowed to talk freely, move around, run, yell (as long as they’re not disturbing anyone else’s work), take bathroom breaks, get snacks or water, etc. whenever they feel like it.

Kids are human.  I know that’s crazy.  But they are.

As an adult, you have much more control over yourself — even at work.  You can stop and use the bathroom usually whenever you want to, even if you have to ask someone to cover for you for a few minutes.  Most adults can keep drinks or snacks with them, or get breaks every couple hours to get them.  Most can chat pretty freely with co-workers as desired.  They’re more autonomous.

Kids can do it too, with an adult presence and guidance where needed.  That’s all this is about.  The basic rules about respect for people and property will stand — kids can’t hurt others, break things, disturb others’ work, and so on.

We’re really excited about this radically unschooling coop.  And other local families are excited, too!  There’s something amazing about exposing kids to lots of different ideas and materials and letting them be creative in their own ways.

We’ll be getting started in just a couple months.  We decided not to wait, because, why?  The “traditional” school year is Sept – May, but we’re not traditionally schooling, so we’ll do what suits us.  We’re breaking free of all the ‘usual’ ways of doing things.

Have you ever participated in a radically unschooling coop?  Or any other type of coop?