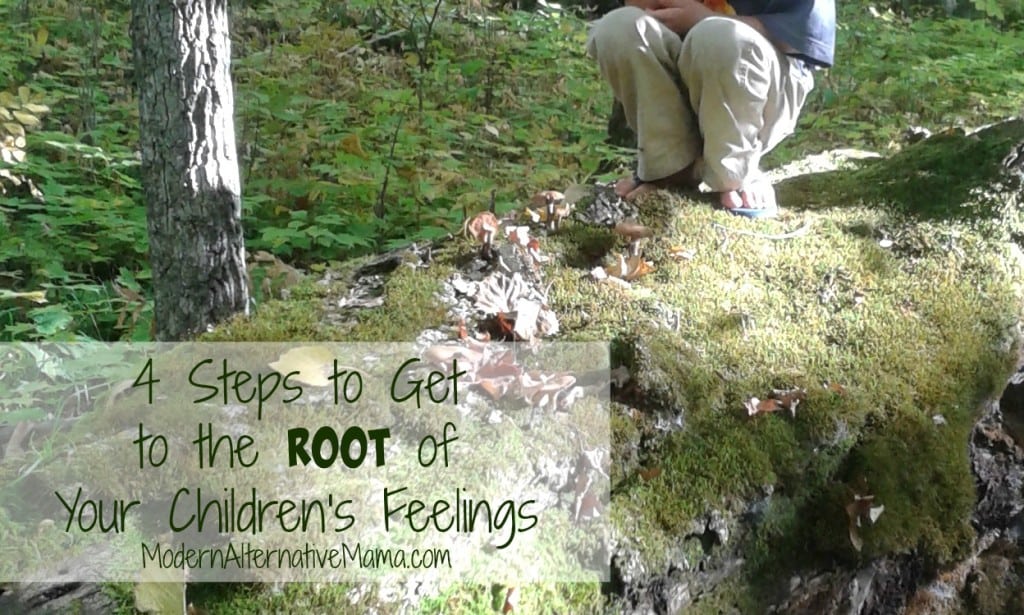 A few weeks ago my kids were getting ready for bed and suddenly heard my 10-year-old roar at his siblings with unusual fervency. The threat was completely out of character.

Realizing he didn’t mean what he said, I waited to find out what was going on. He said, “I’m just really angry! I don’t know why.”

I laid next to him in bed and waited.

After a minute of me laying next to him and listening to what he had to say, the real issue came up. He was hurt. Someone he trusted had said something deeply hurtful to him a few days before. My son was feeling insecure and fearful that they would do it again, and he was angry that his trust was broken in such a way.

It would have been easy in that moment to correct him for making threats with his siblings, but whatever triggered his response wasn’t actually the problem. If I had hollered at my son for his inappropriate expression of anger, we never would have connected or gotten to the root of what was bothering him.

In fact, my discipline likely would have solidified those feelings of anger and insecurity, instead of helping my son identify that big, scary emotion, give words to it, and figure out how to deal with it. But because I listened, he was able to learn what was really bothering him, and address the root emotion.

Digging to the Root

As adults, we value self-awareness, responsibility for one’s actions, and empathy. We often expect our children to learn these, while we cut them off from sharing their feelings and tell them they are overreacting. We respond by denying their feelings, giving them advice, or psychoanalyzing them when really they just need us to show a little empathy.

In order for our children to get to the bottom of their feelings, they need a little guidance and an adult willing to listen. As parents, we need to invest time in helping our children to decode what they are feeling, and help them find the coping skills they need to deal with those feelings.

The first step then is to let our children be introspective; to look inside and find where their feeling is coming from. I think you’ll find it takes little more from you than self-control and an investment of time. Kids are great at solving their own problems when we give them the space to do so.

Stop what you are doing, and give your child your attention. Don’t try to fix the problem or discipline the attitude. (This is where the self-control comes in.)

It doesn’t matter if you think their emotion is out of line or they are overreacting. Whatever emotion your child is experiencing, it is real to them.

Respond with empathy. “You sound angry/discouraged/frustrated/disappointed.” “That must have felt. . .” Sometimes, a simple, “Oh?” or “What’s going on?” does the trick. Give voice to their feelings. Give them words to describe it.

Give your child time to sort it out. Often times, children can solve their own problem when we validate their feelings and give them the time to think about it.

Just because you don’t understand their experience, doesn’t make it less valid to them. Take this time to support your child in brainstorming solutions to their problem, or to give them words to describe what they’re experiencing.

When we take the time to do this on a regular basis, we give our children the vocabulary to process their emotions, a skill that will be very valuable for the rest of their life.

Approaching a conflict this way allows us to help our children find tools to do it differently next time. They can learn to self-regulate their emotions, to respond in a productive manner, and to brainstorm solutions for themselves. It also gives them a sense of pride and control over their lives. Eventually, they’ll be able to do much of this on their own, and then they can be self-aware, responsible, and empathic adults.

A few days after the Great Bedtime Blowup, my son came to me and confessed something that was bothering him. He told me that the reason he told me his secret was because I took the time to listen to him in the days before. He felt safe.

That’s all we really want for our kids, isn’t it? For them to feel safe, and grow into the amazing adults God has created them to be.

What Are You Already Doing to the Root of Your Children’s Feelings?