How I Got Through the 9-Month Sleep Regression |
AD 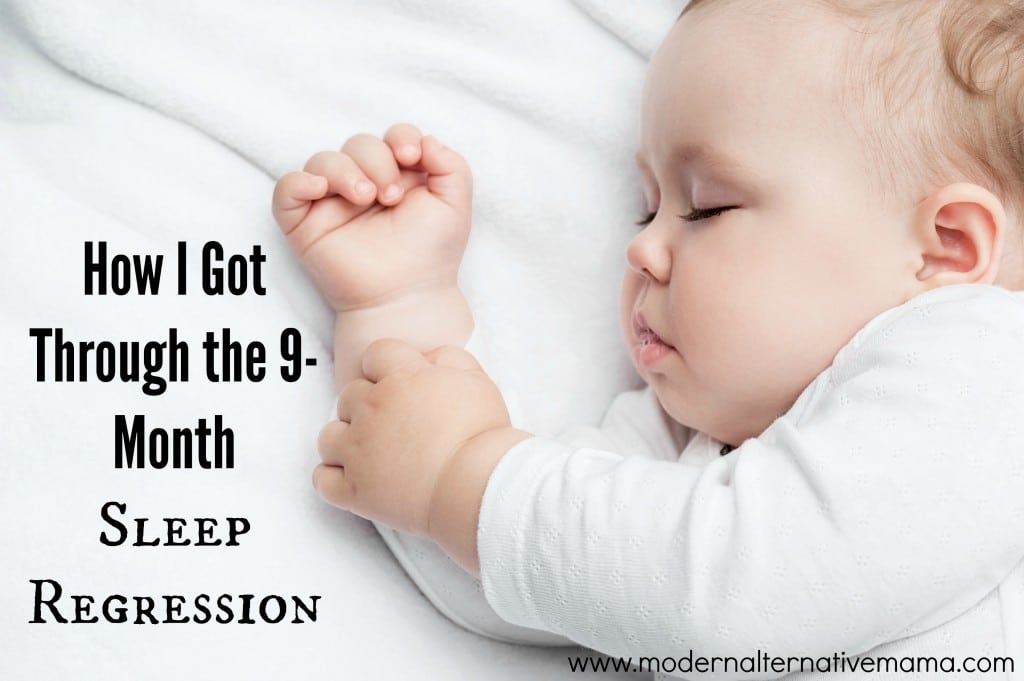 How I Got Through the 9-Month Sleep Regression

You have a baby who has been sleeping well for months.  You put them to bed and they fall asleep quickly.  They wake once or twice a night — or, in a few cases, not at all.  Everything is nice.  You’re not sleep deprived.

Then BAM.  Suddenly, your baby is fighting bed time.  She’s waking up every hour.  She won’t be consoled.  You are exhausted and losing your mind.  She did fine for so long, what is happening?!

Welcome to the 9-month sleep regression.

How I Got Through the 9-Month Sleep Regression

I got “lucky.”  My baby hit it a little early, right around 7 months.  It faked me out a little — my other babies slept so poorly in the first year that I never noticed any sort of “regression” in their sleep habits.  But this baby had slept well from birth…and suddenly, he wasn’t!  I was exhausted, having trouble focusing on work, short with the other kids, and it was not good.

However, this is only temporary.  It will not last forever (even though it seems like it at the time).  There are a whole host of reasons for this sleep regression, all understandable:

It all adds up to one thing: disrupted sleep!

It took almost a month to solve all of the issues going on, but I eventually figured them out.  We still have the odd bad night when I don’t do all the right things.  But I know now why this happens — or at least, why it happened for us! Caleb got 5 new teeth during this period.  That played a big role in him not sleeping!  He would squirm and fuss and drool and bite, and sometimes pull at his ear (but only at night — I had his ears checked and he didn’t have an infection).

I gave him my homemade teething tincture, which helped him quite a bit.  He was able to sleep more easily when I gave this, because he wasn’t in pain.  It’s also much safer than over-the-counter medications.

Caleb does not like to be cold.  This period of time hit in late January to late February, when it was rather cold in our area.  I had been keeping the house around 68, and it was cooler at night.  I like to sleep in a cool room, but he doesn’t!  He woke often, kicked off blankets, refused to sleep in his own bed.  I turned the heat up a bit, and wrapped him in layers, including a fleece blanket sleeper, and he slept a little better.

In the middle of this — perhaps because he was trying to crawl, and teething — he began to act like his neck hurt.  He would not nurse or even lay on my right side!  He squirmed and fussed uncomfortably, like he could not find a good position.  I spent nights lying next to him, propped on my elbow and rubbing his back, just to get him to settle down and fall soundly asleep.

I took him to a chiropractor, who gently adjusted his neck.  He was immediately able to nurse on the right side again, and slept more soundly at night, too.

I think this is absolutely key and explains why so many babies have a sleep regression at this time!

Most babies are born with vitamin and mineral stores, which last roughly 6 – 9 months.  They also get what they need of most vitamins from breastmilk for 6 months.  But after this, their needs start to increase, and sometimes they need a little more than breastmilk alone can provide — at least, from moms who aren’t supplementing.

I found that when I took cod liver oil or vitamin D drops during the day, Caleb slept peacefully.  When I did not, he would be very fitful — rolling around, fussing, not sleeping nearly as well.  I tried taking it or not taking it several times during this month…and there was a clear connection!

There is plenty of research to support this idea.  Studies here, here, and here.

I make sure to take cod liver oil every morning or early afternoon, and Caleb goes to bed a little earlier and sleeps better!

As long as we make sure Caleb eats enough, that his teeth aren’t hurting him, that I have taken cod liver oil, and he is comfortable, we have good nights now.  If I forget any of these — especially the cod liver oil — then we do not have a good night!

Have you dealt with 9-month sleep regression?  What helped your baby?