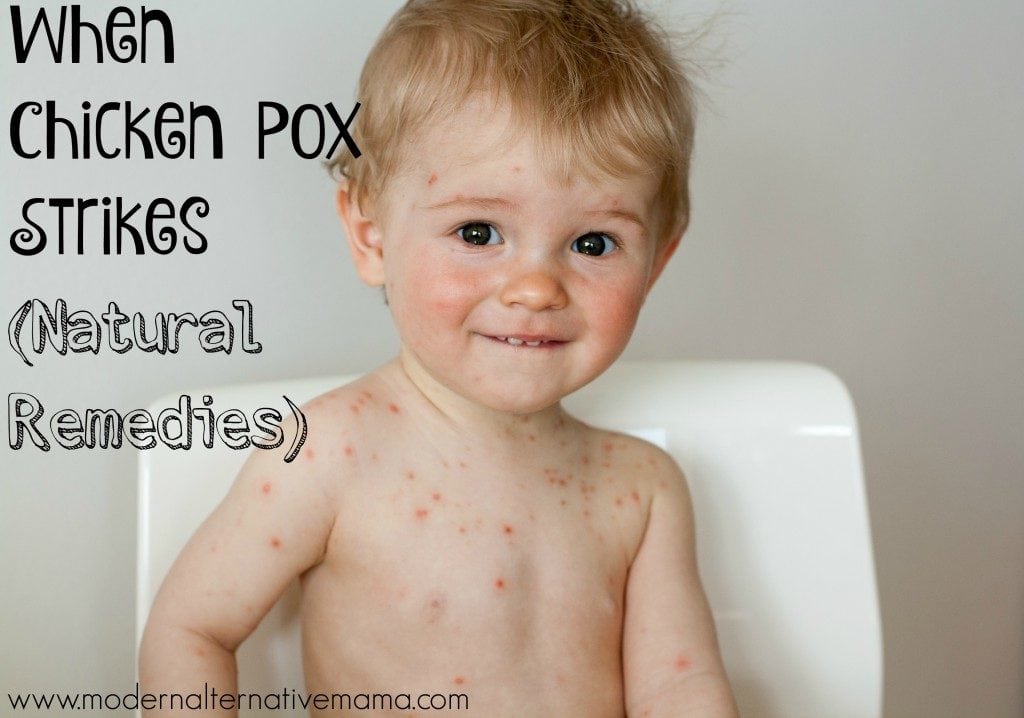 It was a Saturday morning, and I was still in bed.  The kids were downstairs, watching TV, and my husband had stepped out for a quick walk with a friend.  My 2-year-old immediately came upstairs to demand that I punch the code into the iPad so that he could watch a different show.  And then my 7-year-old came dancing into the room with this cheerful announcement: “Look, I have the chicken pox!”

I got up to put my contacts in so I could better examine her.  I had seen two small spots on her face the day before, but she’d had a small patch of eczema develop a few days prior, so I assumed they were just that.  (Her first eczema in several years!!)  But she lifted her shirt, and she was, indeed, covered in spots.

I looked at them closely.  Some were flat and red, and some were developing little blister-like bits in the center.  She was very itchy.  The spots were concentrated on her belly, back, and face with almost none on her legs, arms, hands, or feet.  Yes, indeed — it seemed to be chicken pox!

First things first, it was off to a baking soda bath so she could stop scratching.  The itchiness was bothering her, but that was it.  Otherwise, she was literally dancing around my room.

I remember having had chicken pox myself back in the summer of ’95.  One day I was out shopping my mom and I felt very tired and kind of odd.  When we got home, my mom realized I had a fever.  The next day I didn’t have much appetite and felt sort of weepy and tired, and the spots broke out.  After that, I was itchy, but fine — I played outside in the sprinkler and ran around.  I just had to stay in my own yard since I was still contagious.  It was no big deal.

Fast forward 20 years, and my daughter’s having a similar experience.  Except she didn’t even have the fever, lack of appetite, and weepiness.  Just the rash breaking out.  She also doesn’t have as many spots as I did.

Her spots continued to break out for about 3 days, and the day after, scabbed over and she felt much better.  It was about 5 days of symptoms, and another week or so (during which she wasn’t contagious) for them to finish healing.

Honestly?  She enjoyed it.  That sounds silly, but she got to take two baths a day in the “big tub” (we have one with jets), drink lots of tea, and Skype almost daily with her grandparents.  All her favorite things!  Chicken pox was mostly an excuse for her to just sit back and relax and do these things.

As I mentioned in yesterday’s post, we chose to keep all the kids at home during the incubation period.  Well, except to visit grandma’s house for Thanksgiving, but they knew the kids had chicken pox and were okay with it.  Actually, after glancing at this study, they wanted the kids to come around, so they could boost their immunity naturally!

Well, they got lucky.

The baby was fussy on Thanksgiving day — wanting to nurse quite a bit, sleep often, and not wanting to be put down.  He remained pretty irritable on Friday as well.  Saturday, I saw the spots!  At that point, it was almost exactly 14 days after my oldest came down with it.  He was in the contagious period when we were still visiting family.

The other boys followed suit.  Sunday morning, my 6-year-old had some spots.  Monday afternoon, I found spots on the 4-year-old.  The 2-year-old wasn’t feeling cooperative but he may have had spots on Monday as well.

The baby hasn’t enjoyed it all that much — he’s been itchy and somewhat fitful at night, because he doesn’t understand.  During the day he’s pretty happy, and he loves taking baking soda baths with me at night.

The other boys have not shown hardly any symptoms and don’t have many spots.  The 6-year-old said he felt “weird” for a day or two before the spots popped up, but it wasn’t anything specific he could describe.  The younger boys didn’t really say anything or act different.  None of them seemed too itchy.

It was pretty classic for each of them, though — spots for a few days, and some cold-like symptoms.  Nothing that slowed them down.  And now, once the last is scabbed over, our quarantine is done!

This is how chicken pox has always gone for the majority.  That is, the average child, who is not a teen or adult (when it can be more serious) and is not immuno-compromised.  Chicken pox is no big deal for most kids.

I actually explained to my daughter that some people get vaccines for this and asked if she wished she’d gotten that.  She said no.

Somehow, most people have been convinced that complications and even death are “likely” in chicken pox.  And that’s just not the case.  In fact, the chances of dying from chicken pox are something like 0.0025%, or 1 in 4000 (and that’s stacked primarily towards people who have underlying conditions.  A healthy child might be 1 in a million).

The varicella vaccine was added to the schedule in the late 90s to prevent parents from having to take time off work to care for sick kids.  It wasn’t because chicken pox was that big a deal.

Unfortunately, that’s meant that adults are more at risk of developing chicken pox, when it’s more serious — from not having been vaccinated, or from the vaccine wearing off.  I feel fortunate to have had it naturally, and to have my immunity boosted naturally by caring for my children (reducing my risk of shingles).

How to Treat Chicken Pox Naturally

In most cases, not much is required.

We did baking soda baths 2x a day, or as needed (the less itchy kids didn’t need them as much).  Oatmeal, ground into a coarse flour and added to the bath, is another good option.

I used this drawing salve on the baby’s itchiest spots (the areas where he was rubbing at night when he couldn’t sleep) and it seemed to help — within 20 minutes he was able to fall asleep again and sleep pretty soundly for about 6 hours.  This diaper rash salve is another option, as it contains lavender and calendula, which calm inflamed skin.  The 6-year-old slept very soundly when we put that on him before bed and woke up with his spots scabbing over already.

Anti-viral herbs can be beneficial, like elderberry, lemon balm, and garlic.  I didn’t use these during the rash, but they all developed a cough after it began healing and at that point I gave elderberry syrup.  (I didn’t give it to the baby, he is EBF so I took it myself.)

Sometimes, scratching the pox can lead to secondary infections.  This is not common and didn’t happen to us.  If it had, I would have tried a paste of raw honey and turmeric, or colloidal silver (something I’m starting to explore).  Of course see a doctor if it is serious.

Most of the time, chicken pox resolves in about a week with no issues.

Has your family had chicken pox?