10 Things Your Doctor Isn’t Telling You About Health |
AD 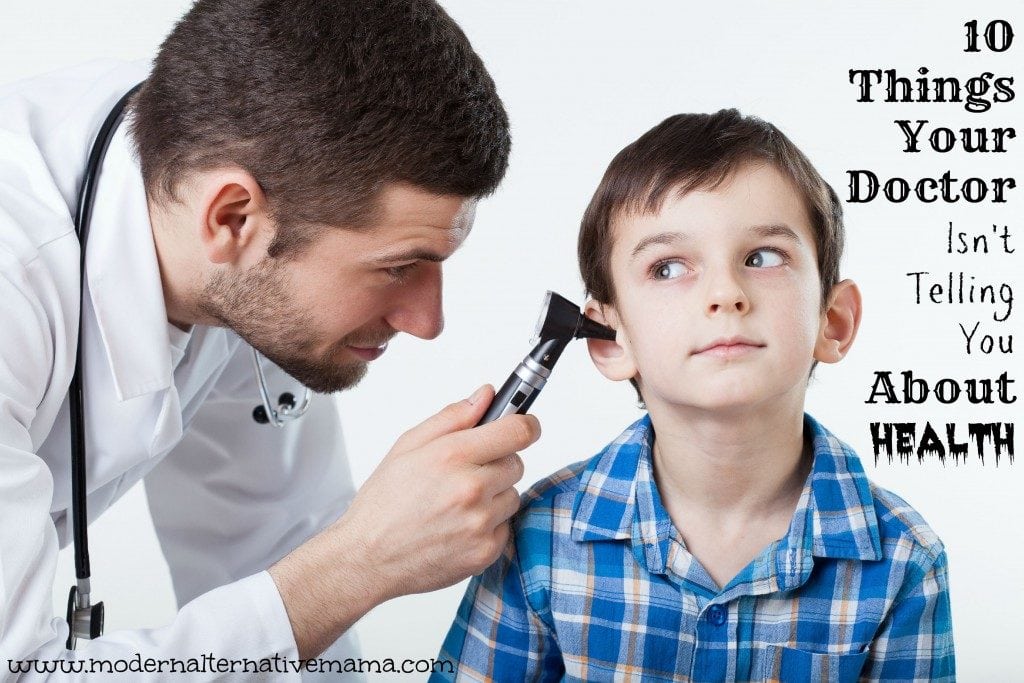 10 Things Your Doctor Isn’t Telling You About Health

Do you ever feel like there are things your doctor isn’t telling you? When my oldest was born, we had a doctor’s appointment scheduled when she was 4 days old, to meet the pediatrician and make sure things were going okay. Though it was late January, I dressed her in a onesie and simply piled blankets all over her car seat — I was too tired to think straight. At the doctor’s, the brief exam showed she was doing well, except that the doctor was concerned about her cord stump.

“See this yellow stuff?” he said, showing us. “That means it could get infected. And if it does, it’ll go straight to her liver. The belly button’s connected to it.” Well, we went home terrified, and began cleaning it with alcohol at every diaper change, to prevent this liver infection.

I learned later that a little yellow junk around the drying cord is normal, and that the signs of infection to look for include redness, swelling, actual pus (that’s foul smelling), fever, etc. And that this would not have meant it was going straight to her liver at all.

Around 4 months, I asked her doctor for his advice on which car seat to use. Would a convertible car seat be okay? His response was “It doesn’t really matter…but you should probably keep her rear-facing.” Probably? (We no longer see this doctor, and I heard he retired a few years ago.)

What Your Doctor Isn’t Telling You

What these stories illustrate is that your doctor isn’t telling you everything. And more importantly, your doctor doesn’t always know everything. Mine certainly should have known that the yellow fluid around the cord was normal, and that it was illegal to forward-face a four-month-old.

There are definitely excellent doctors out there. We now have a family doctor we love — this isn’t about bashing doctors. But, doctors are human and can’t know everything, and certain things just aren’t really known or shared in the mainstream much. That’s why it’s time to share the truth — the truth your doctor isn’t telling you.

1. When you’re sick, symptoms are actually good for you.

Head to the doctor with any illness, and you’ll be given a prescription to make the symptoms go away so you feel better.

But, that’s not actually a good idea.  See, the symptoms are actually good.  The symptoms are your body’s way of clearing out the bacteria or viruses that are making you sick.  That runny nose is carrying the germs out!  So, taking medicine that stops those symptoms (i.e. dries up the runny nose) isn’t actually helping you, or your child.  Yes, it’s annoying, but it’s better to let it happen for a few days.

(Not to mention it’s a sign your body’s doing what it’s supposed to.  It would be much worse if your immune system didn’t react to bad bacteria.)

I’ve heard a lot of doctors (and others) say, “It doesn’t really matter what they eat, as long as they eat.”  Or that food is healthy if there are certain ingredients or or not on the label, or certain health claims made on the label.  But, if the food is processed, this isn’t true.

Cereal, for example, is never a good choice.  We all know that most varieties are filled with sugar and artificial colors, and obviously those aren’t healthy.  But even the “better” types are made from extruded grains, which means the proteins in them are denatured and the oils are typically rancid.  (Open a box and smell it sometime.)

Unprocessed food is better, and yes, what you eat (and what your child eats) matters a lot.

3. Low fat isn’t better for your toddler (or anyone).

Although scientific research has shown that low-fat foods are not healthier, the “official” guidelines are still to switch to low-fat milk after two years of age.  This, however, is a big mistake!  Dairy fat from healthy cows is not associated with any negative health impacts, and toddlers and children need fat for their developing brains and growing bodies.  The guideline should be plain whole milk for everyone — although a pint to a quart a day is not necessary.

Something else milk-related your doctor may not tell you is that breastfeeding beyond a year can provide for much of your child’s dietary needs, including any “dairy” needs, and that breastfeeding should continue as long as mom and baby desire.

4. Not all exercise is healthy.

Exercise is absolutely a good thing.  But, long-distance endurance type exercise is not always a good thing, especially for younger kids.  We’ve all heard the stories of the “super healthy” track stars who had heart attacks and just died in their teens or early 20s.  That’s because such training can sometimes place a great strain on the heart, causing serious problems.

For most kids, it’s better to encourage sports (like soccer) where the exercise is stopping and starting rather than constant, or just plain old outdoor play.

5. Your child’s behavior might be related to what she’s eating (or not eating).

Some parents are absolutely exhausted by their child’s behavior.  They don’t listen, they throw tantrums at the drop of a hat, they can’t focus on anything, they get angry often….  It’s frustrating for everyone.

A child’s behavior is often impacted heavily by what they do eat — or what they don’t.  Children who are missing important nutrients, like vitamin D, B vitamins, or omega-3s can struggle more with focus and attention, as well as anxiety.  Plus, children who have refined sugar, artificial food dyes, and other processed ingredients can struggle.

Many parents see huge changes in their child’s behavior when they cut out processed food additives and add in a fish oil supplement.  It’s definitely worth a try!

6. Supplements can really benefit your health — but not all of them.

Some doctors are pretty anti-supplements — meaning, don’t take any vitamin pills.  Others are pro-vitamin, but recommend mainstream brands that contain synthetic nutrients.

Unfortunately, neither position is really correct, or all that helpful.  There’s evidence that synthetic supplements are actually more harmful than beneficial.  But, being deficient in key nutrients is harmful, too.  A varied diet, plenty of access to fruits and vegetables, and a laid-back approach to what kids eat will help to ensure balance over time.  But, a whole-foods-based multivitamin can be helpful as well.  Just make sure it is truly natural and not synthetic!

7. Giving your baby rice cereal isn’t beneficial, and may be harmful.

Most doctors recommend starting baby out with rice cereal.  The reason?  It’s (supposedly) hypo-allergenic and bland, so baby should be okay with eating it.

Except, rice cereal is a highly processed grain.  And, it’s hard for babies to digest with immature guts.  Babies can’t really digest grains until at least 8 – 9 months, and many struggle until around age 2, when all their molars are in and their digestion is fully mature.

Instead, foods like avocado, banana, egg yolk, or even butter are much easier to digest and much more nourishing for baby.

8. Breast milk is a whole lot more than just food.

Breastfeeding is really important, and not just because it feeds your baby.

Now, some women can’t breastfeed and those women should be pointed to the best available formulas.  But for other women, they need to know that breast milk, in addition to being food (that is perfectly tailored to your baby’s needs at all times), contains billions of probiotics, growth hormones, immune factors, and so much more.  There’s even a communication, where baby’s saliva is absorbed back into your skin during breastfeeding, and if baby has been exposed to some pathogen, your body will make antibodies for it, and baby will get those in the next feeding.  Breastfeeding is basically your baby’s immune system.

That’s why it matters so much.  Your doctor should be up front with you about breastfeeding’s many benefits, and help you to find the best alternative, should one be needed.

9. The lotion you put on your baby’s skin may not be safe.

If you’re buying regular old baby lotion off the shelf, it may not be very safe.

See, baby lotions usually contain a bunch of chemicals that are supposedly “safe,” but they aren’t very natural.  I once put a good-night baby lotion on my daughter’s skin…and watched it turn an angry red immediately!  That was the end of store bought lotions for us.

Instead, look for natural plant oils and lotions that are based on them.  There are several excellent choices now.

10. Eczema is a sign of allergies (and steroids won’t help)

A lot of doctors dismiss eczema as “something babies have” and say they don’t know the cause.  Well, they may not, but many others do.  It’s allergies.

Eczema could be a sign of allergies to something environmental (the detergent you’re using, your dog, ragweed), or they could be a sign of food allergies.  Either way, it’s not normal.  Steroids won’t help, because they won’t address the root cause.  Finding out why eczema is happening and removing the cause is the best way to address it.

We used the GAPS diet to address my daughter’s many food allergies when she was a toddler, and her severe eczema disappeared and hasn’t come back.  She’s 7 now.  So, I’ve been there — and yes, you can get rid of eczema.

What else do you suspect your doctor isn’t telling you?