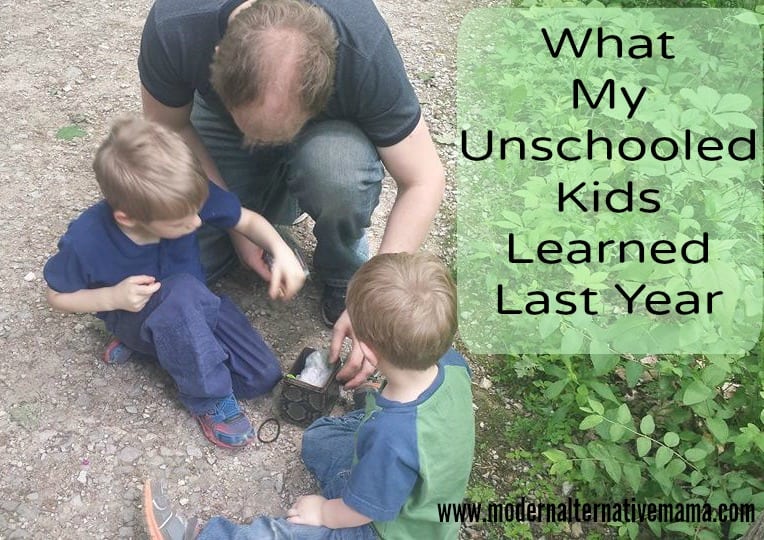 When I thought about this post, it initially seemed very hard to me.  Since we unschool, trying to quantify what my kids learn year to year isn’t exactly simple.  We don’t have unit studies, worksheets, grades, etc. to point to.  (Of course — none of that actually means kids learned, anyway.  It means they at least went through the motions.  They may remember none of it.)

Instead, I’m pulling from conversations we’ve had, skills they’ve demonstrated (some of which surprised us!), projects they’ve chosen to do.  The difference, of course, is that I know that they truly learned.  I didn’t test them on these things at some arbitrary time, and they weren’t just regurgitating information.  They demonstrated these skills on their own, when they wanted to, in a real-life setting.  That’s true mastery.

I have to say that, not to knock other forms of schooling, but to explain that we’re coming from an entirely different perspective than those other forms.  Not having “paper evidence” of learning does not mean no learning took place.  (And using a formal curriculum and having such evidence doesn’t mean that it did…or didn’t.)  Any form of schooling or education can lead to learning.  No form guarantees learning.  I just want everyone to remember that.

However!  My kids have learned quite a bit.  Sometimes, even things we weren’t ready for!

What My Unschooled Kids Learned

I’ll be focusing primarily on my older two, who are in “elementary” school right now.  I’m not so concerned with the smaller ones yet, although they’re clearly learning!  My youngest, who was 18 months at the start of the school year (turned 2 in March), didn’t talk really at all, and now speaks in sentences with a huge vocabulary.  The words he understands and uses correctly really do surprise me, sometimes!

This is not their favorite thing.  All my kids seem to be more oriented to math and science than to literature.  But nonetheless, my daughter went from not reading at all to reading basic level books and knowing a couple hundred sight words.  My son (5 YO) went from not reading at all to knowing quite a few words — I’m not sure exactly how many, but he’s been able to read almost half of his early reader books to me at times.  So they’re definitely making progress here, slow as it is.

As I mentioned, they love math.  Mental math is done around here quite frequently, like “Hey mom, six plus seven is thirteen, right?”  My son went from being able to count to 20, to being able to count to over 100.  They do both addition and subtraction of 1 and 2 digit numbers.  They’re good at picking up on patterns.  They count by 1s, 2s, 10s and possibly other forms of skip counting.  (They can pretty much do all of “first-grade math” anyway.)

My daughter learned to read both digital and analog clocks correctly and understand time.  For example, she’s now able to look at a clock and see 10:53 and say “Mom, it’s almost 11.”  They also have a sense of what happens in our day around what time — that noon is about lunch, two is about naptime, etc.

Most of the kids learned to identify different coins correctly, and my oldest has learned to count them correctly and how to create a small budget and spend the money she has available.  She’s also keen to find a realistic way she can earn money soon.

Somehow (we’re frankly not quite sure how), my 7-year-old learned to read and use a compass correctly.  She does so when they go geocaching in the local woods, to help lead everyone to the “treasure.”

My daughter has done increasingly complex puzzles, now working on ones with 200 – 500 pieces.

My daughter has learned to bottle and re-start kombucha, feed a sourdough starter, cook eggs and pancakes, prepare salads, cook pasta, and more.  My son has improved his knife skills and slices veggies and cheese for meal components.

These kids are better than I am at using our Kindle Fire to find the various shows and apps they use.  They use the iPad well, also.  The older three used the ABC Mouse program sometimes for letters, numbers, colors, etc. (which was really below the level of the older two by mid-year).

All the older kids play (3 and up).  My 5 YO especially has gotten good at it, learning to gather resources, create future plans, build various structures (including some that are rather complicated), and more.  He’s learning some basic programming language in order to do some of this.  He has also played various “special” games within the game online and has done quite well, even against people much older than he is.

The kids have created various art projects.  They have created robots out of cardboard (including robot costumes for themselves), drawn and cut various shapes, used paint, tape, glue, and other materials to create.  They often work together on such projects and create elaborate backstories for them.

The kids have learned where meat comes from, specifically which animals.  (My 2-year-old learned to ask “Animal?” so that I would tell him the correct name.  Most kids this age simply call all 4-legged animals “dog” for example, but he knew this wasn’t right when we met some cows, so he asked.)  They learned where milk and eggs come from and how to milk cows.  They learned how seeds grow and have grown some of their own plants.

My 5 YO is currently on a T-ball tea and is learning a lot.  He was able to hit when I pitched to him at age 3, so he’s doing very well with hitting, throwing and catching now.  We’re working with him at home, too, to learn the fundamentals of the game (when to run, safe vs. out, etc.).

The kids took several field trips this past year, to a chocolate factory, science museums, local Indian caverns, farms, and other tours and museums.  At most of these they got a chance to be hands-on with various materials, including building their own race cars out of K’Nex, creating art projects, learning how chocolate candy is made (and tasting it!), panning for gold and gems, and more.

The kids picked up on a lot of random facts from watching “How It’s Made” videos as well as taking tours of many local factories, farms, garden centers, and other locations.  We visited the library every couple of weeks, including attending “LEGO club” once, where the kids competed to design based on a theme.  They’ve written and (mostly) illustrated several books.

There’s probably lots more I’m missing, but that hits the highlights.  The kids made great strides in their understanding of basic math, reading, science, and the world around us.  And they really learned these things, because they wanted to, not because they were given worksheets and tests and told they should.  We’ll be continuing with unschooling next year, as it is really working well for us!

What did your homeschooled or unschooled kids learn last year?