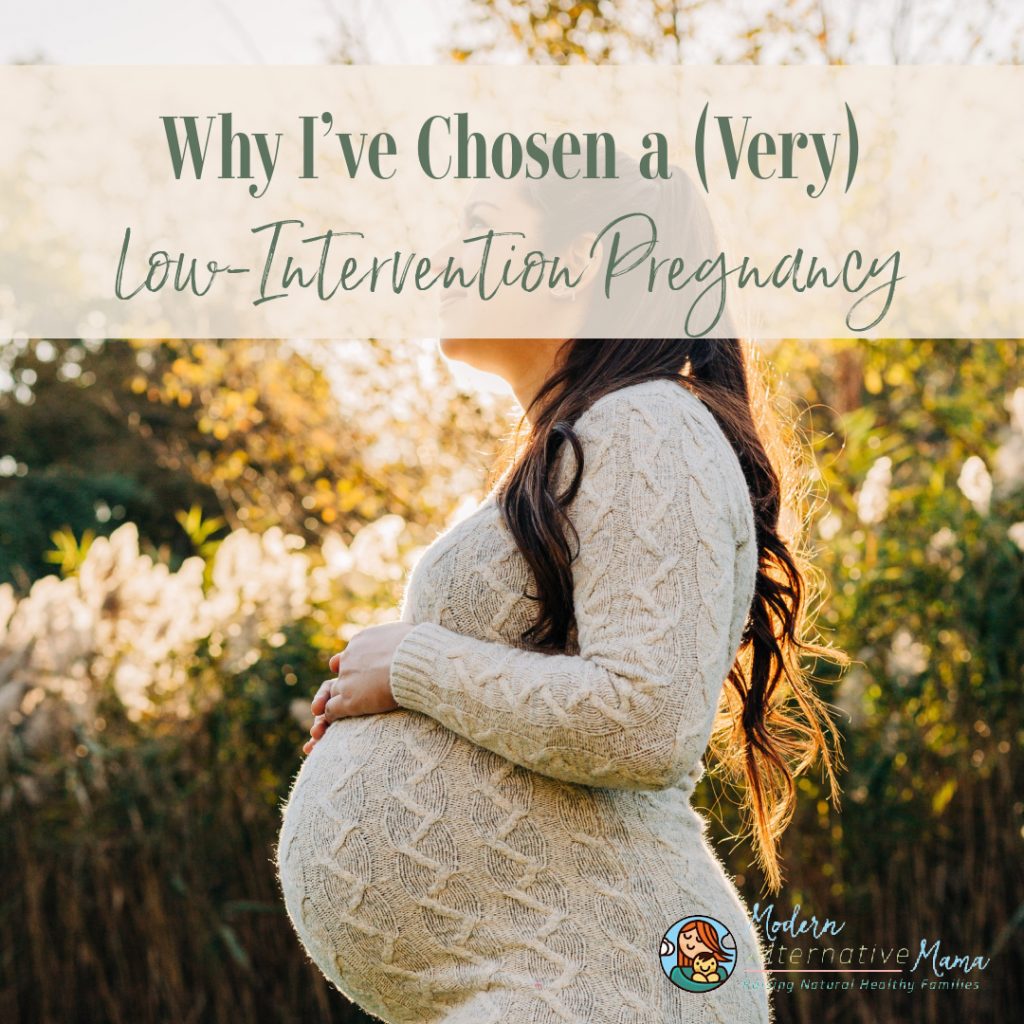 If you haven’t heard the good news yet, we’re expecting our fifth baby early this summer.  We’ve chosen a low-intervention pregnancy (see what that means for our prenatal care).

This baby will be our fourth home birth and third mostly “hands-off” pregnancy.  But we’re taking that even a step further this time by refusing almost all forms of intervention in pregnancy.  As this is still not common even among “natural” mothers, I want to share with you a bit about what this means and why it is.

Please know that this is just *my* experience and choices.  My obstetrical history is totally uncomplicated, with no losses, no complications in any pregnancy or delivery, etc.  And it is my fifth baby, not my first or second.  I’m not recommending to you that you do what I do, but merely offering this as information and possibly support.  Some women do not know they have a choice about these things.  Other women do not know why people would refuse because they have never heard any of the downsides to these interventions.  And still, other women are making similar choices but feel alone, because not that many people do these things.

Always consider your history before making any decisions.  But, here are mine.

I didn’t always do pregnancy this way.

My first pregnancy was pretty much by-the-book.  I went to all my normal OB appointments, starting at 8 weeks.  Yes, I saw an OB, not a midwife.  I did the recommended blood tests and internal exams.  (I did refuse the quad screen for genetic issues as well as amniocentesis, but as I was 22, these weren’t really offered and I wasn’t in a high-risk category.)  I had a GD test complete with the bright orange drink.  I got swabbed for GBS (I was negative).  I had ultrasounds at 8 and 20 weeks and the doctor used the Doppler at every appointment, starting at 16 weeks to check baby’s heartbeat.

In labor, I had an epidural.  I had pitocin.  I had my water broken.  I even had a narcotic early in labor to try to avoid an epidural, which didn’t work (I learned later that the risks of narcotics are higher than those of epidurals…grr).  After birth, the cord was cut immediately, the baby was whisked away and not brought back for 45 minutes, and was given the usual eye ointment, vitamin K shot, and so on.  We did refuse the Hep B shot, but that’s about it.

Guess what — that baby is now 7, and has some sensory issues and other problems.  Largely related to all that crap, although also to our poor diet at the time.  That won’t ever change.  That’s something we all (my husband, myself, my daughter) have to deal with every day.

In my second pregnancy, I did a little more research.  I decided I wanted more “alternative” care.  I wanted to refuse more things.  I selected a practice that offered both OBs and midwives who worked under their supervision.

So, with baby #2, I had ultrasounds at 8 and 20 weeks.  I allowed Doppler use at each appointment (until 28 weeks).  I did the blood tests.  I did internal exams.  I did refuse the GD test, which led to me leaving the practice I was with because I was basically told that if I didn’t take the test I’d get kicked out anyway.  I switched to home birth midwives (something else that would have gotten me kicked out).  Then, there was no more Doppler use (until labor), no more internal exams (until labor), no GBS test.

Since I delivered at home, there were no interventions during birth, other than Doppler use and a couple internal exams.  No medications.

This baby has had some sensory issues too, although not as much, and seems to be outgrowing them.  He is 5.  You can read his birth story here.

With babies 3 and 4, I walked even further away.  I had the same midwives’ practice with both of them.  I didn’t have any ultrasounds, no internal exams (not even in labor), no blood tests.  No GD, no GBS.  I did have some fears during pregnancy that were completely irrational (that baby #3 would be born with some massive fatal birth defect,  and that I would have a ‘missed’ miscarriage with #4 and not know he was gone — unfortunately this happened to several people I knew around the time I got pregnant).  I did see the midwives on schedule starting at 8 weeks and had the Doppler to hear baby’s heartbeat until 20 weeks when the fetoscope worked.  And I did allow a finger prick for anemia and the typical fundal height measurements, weight checks, and urine tests.

Neither of these babies have any sensory issues.

With baby 5 though…I’m doing even less.

As you can see, I started out pretty mainstream, and I’ve done less and less with each pregnancy.  This time, I feel a strong sense of peace about everything in my low-intervention pregnancy.  I don’t have any irrational fears.  I feel confident in my baby and my body and like I just don’t need any intervention — unless or until I experience any issues, of course.  But that’s not been the case.

I didn’t start prenatal appointments until 12 weeks this time, and my second was at 18 weeks (and after that, I might need to “cooperate” for 22 weeks, but I’d be fine waiting until 24).  I’ve had no blood tests or internal exams.  I have continued to refuse ultrasounds and have also refused the Doppler this time — we didn’t hear the baby’s heartbeat until 18 weeks (but then we heard a nice, strong one with the fetoscope).  But I still don’t worry!  I’ve had plenty of “morning sickness” (nausea that strikes at random with no warning), sleepiness, and everything’s changing as it should.  External measurements were good at 12 weeks!

Plus, by 16 weeks I could feel the baby move, and by 18 weeks could feel it several times a day.  I know there’s a healthy baby in there!  And yes — I had to wait longer to know for sure than someone who used a Doppler or got an ultrasound at 8 weeks, but that’s okay.  I felt very peaceful about waiting.

The thing is, all of these interventions aren’t really to ensure a healthy baby.  They are to detect a problem.  That difference is pretty important because many women think that by getting all of these tests and measurements done that they’re ensuring a healthy baby, but that’s not true.  If your baby is healthy, then it will be healthy with or without these tests.  If it is not healthy, then a test will detect that situation — but not prevent it.

In my opinion, if and when there is any indication of a problem — if you are dizzy, have any swelling, severe morning sickness, spotting or bleeding (that lasts more than a short time — sex and constipation can cause very brief spotting and this typically isn’t a problem), high or very low blood pressure, extreme fatigue, feel no movement for hours after 20 weeks, faint, have frequent headaches, etc. then you should follow up and get a test to help figure out what is wrong.  There is a time and a place for testing and other interventions.

However, there are studies to indicate that these tests come with risks, too, which is why I won’t get them “just because.”

My personal history is extremely uncomplicated (no issues getting pregnant, staying pregnant, during pregnancy or birth) so I don’t feel that the benefits of most interventions would outweigh the risks, for me.  I refuse:

Getting into the details of why I refuse each specific test is really beyond the scope of this post.  But in (very) short, there is no evidence to suggest that internal exams are ever beneficial outside of problems and sometimes in labor (but I know how to check myself, and I do, and I let others know what’s happening).  Blood tests are only needed if you suspect an issue or a problem actually crops up — but you don’t need to know your immune status to anything.  (I do actually allow a finger prick at 28 weeks to check for anemia but that’s it.)

Large-scale studies show evidence of brain damage from early ultrasounds or Doppler use and also show no improved outcomes in pregnancies.  GD test has a high rate of false positives which can lead to all kinds of unnecessary interventions in late pregnancy and labor.  GBS is not really a risk if you deliver quickly (my water usually breaks as I’m pushing, and I push for two minutes), fermented foods can help prevent, and testing positive can lead to pushing antibiotics and seriously messing up your/baby’s gut flora.

We’ll be having this baby at home, just like our last three.  For me, home birth is definitely the lower-risk situation.

Look, there are times and places for certain interventions.  If you have a problem or if you are high risk.  And yes, “anything” could happen, but it’s very unlikely.  I look at the risk/benefit from likely outcomes, not the remotest possibilities.  I feel very peaceful about my choice to be very low-intervention right now.  If that should change, then maybe I’ll make different choices.  Right now this is how it’s going down.

How do you handle pregnancy — do you have a low-intervention pregnancy?