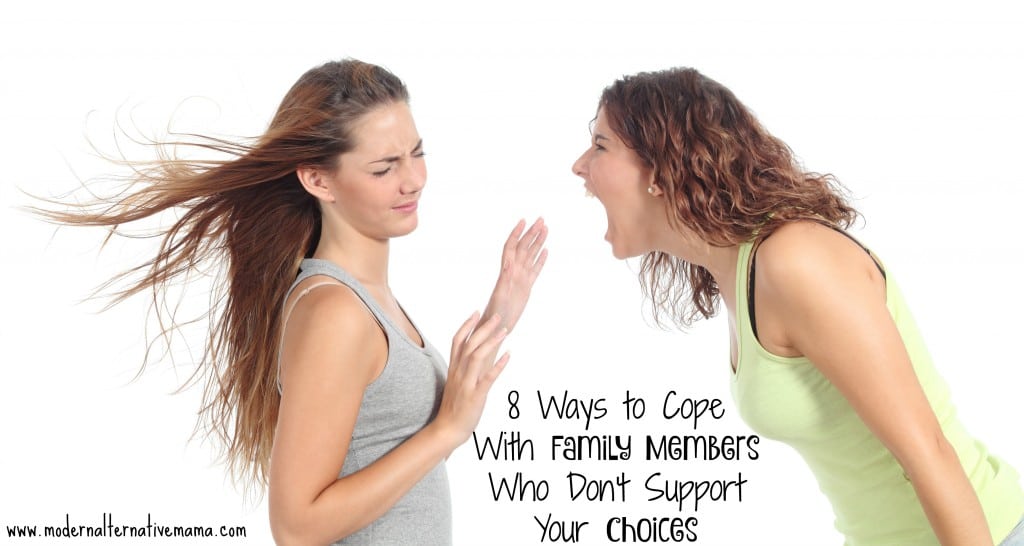 We’ve all been there.

That passive-aggressive remark.  The snide judgment.  The outright statement “What you’re doing is wrong and I want you to change.”  It hurts all the more when these come from our own family members, people that we thought would, or should, be with us even when the going got tough.

It isn’t easy to make alternative choices.  It isn’t easy to know what is right, to find the resources we need to do it.  It’s hard, really.  But it’s even worse to face strong opposition from family members who stop inviting you to events ,or pull you aside to yell at you, or who just can’t keep their comments to themselves — in person or on social media.

We can’t change others.  And we shouldn’t change to please them, either.  But we still have to cope with family members and the reality that they don’t support us.  Here are 8 ways to deal.

1. Remember You Don’t Need Their Approval

It’s really nice when our families, who are supposed to be there for us through thick and thin, approve of our choices.  Some of us really seek approval, especially from our parents.  But the honest truth is, you do not need anyone’s approval for the choices that you make.

Once you’re a grown-up, out on your own, you make the decisions.  They can say whatever they like, but they don’t get a vote in how you live your life or raise your children.  It’s nice if we can get valid and valuable advice from people who’ve been there, but they’re not always right and you don’t have to listen to them.

We have family who doesn’t like that we choose not to spank our children.  Several used to be upset about us placing limits on junk food.  We aren’t rude about it, but we don’t back down just because they don’t like it.  Don’t let them make you feel guilty or emotionally manipulate you — you are the adult and you make the decisions for your family.   Period.

If you know a particular issue is contentious in your family — such as choosing not to vaccinate or using a delayed schedule, homeschooling, or even not giving babies under a year old sugary treats — try not to discuss it.  Just don’t bring it up with the people who don’t agree.

It’s often possible to get along fine with family as long as you don’t allow the subject to come up.  We had to employ this tactic over our choice not to vaccinate with some family members initially, who were very upset (they’ve mellowed since, as they’ve seen how healthy our children have been in general).

3. State Firmly That Your Choices are Not Up for Discussion

Of course, avoiding the subject doesn’t work if your family members insist on bringing it up and trying to question you or “advise” you about it.  If changing the subject or trying to avoid the discussion doesn’t work, you may have to state firmly, “That subject is not up for discussion.  We have made our choice, and you have made yours.  We are not going to change one another’s mind on this, and arguing is just making everyone upset.  Drop it.”

They may not like this, but you have a right to refuse to discuss your choice and to let them know you won’t allow their attempts to goad you on the topic.  Some people don’t realize that they’re coming on too strongly and will drop it after this.  Others, however, will not….

Sometimes, family members are upset because they don’t really understand why someone would choose what you have.  We ran into this with home birth — some of our family members didn’t understand it at first.  They weren’t hostile about it, though, so we chose to invite them to meet our midwives, and we provided them with information about the safety of home birth.

If your issue is food, inviting them to watch a documentary like Food Inc. with you is a gentle, non-personal way to educate them on the topic.  They may not change their minds or the way they live, but they may at least understand better why you make the choices you do, and stop bugging you so much.  Answering any honest questions is a good policy.

5. Avoid the Family Member(s) in Question

If you run into a family member who is truly hostile about your choices, even after you’ve tried to avoid the subjects or let them know it’s not okay to discuss them, it may come down to simply avoiding them.  You don’t need to spend a bunch of time with people who mostly attack you because they don’t like what you do.  It’s hard, especially if it’s a parent or a sibling that you were formerly close to, but if the issue has become that divisive, it may be better to avoid the person as much as possible.

Don’t call them, don’t accept invitations to spend time alone with them, and keep conversations short at family functions.  Let them know, if you want, that the issue has become so difficult and you feel so attacked that you feel the need to limit your time with them.  Some will change to preserve the relationship; others won’t.  It’s a hard call to make, but sometimes it’s necessary.

6. Stay Respectful, Even When It’s Hard

It’s really hard when people are attacking you, either subtly or not-so-subtly.  There’s really no point in getting nasty with the person, though.  They have strong feelings for whatever reason and if you yell at them or call them names, it’s only going to make them angry and more firm in their beliefs.  Smile, nod, or make firm but gentle comments.  If you’re upset, vent to your husband or a supportive friend later on — you do need a “safe space” to deal with your frustration!

Some people can keep it together just fine when they’re face-to-face, but really let it all hang out on social media.  It doesn’t feel real, and it can be the perfect “battleground.”  We’ve personally had to unfriend or unfollow family members who simply could not stop arguing — anything we posted that alluded to our “different” choices was grounds for an argument, even though it wasn’t aimed at them, posted to them, or about them.  It was easier to stop the fighting before it started and preserve the in-person relationship by simply not seeing one another’s social media feeds.

8. Turn to Those Who Do Understand

It is undoubtedly wearying to deal with people who tear you down and belittle your choices.  Find yourself a real-life or online community where you can talk to like-minded people who “get it.”  There are lots of them out there!  It’s nice to know that you can vent to your friends when your family is getting you down, and know that they’ll understand.  This is so important!

How do you cope with family members who don’t understand your choices?