Is There Lead in Bentonite Clay? |
AD 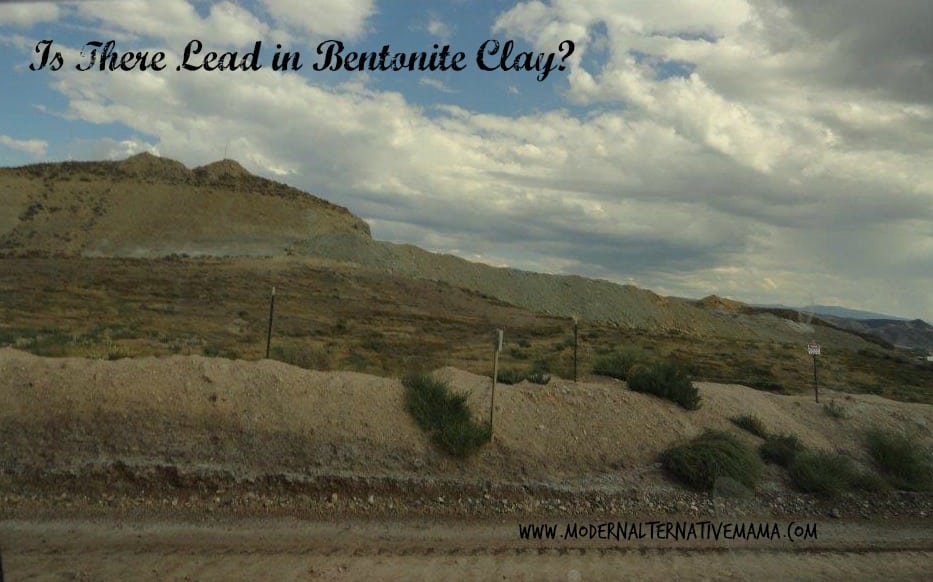 Is There Lead in Bentonite Clay? This post is sponsored.  All research is independent and all opinions are my own.

Recently, some people have become concerned that bentonite clay isn’t safe and may contain lead.  Lead, as many know, is not a safe substance and can cause brain damage.  It’s therefore regulated quite carefully and most people try to avoid it.

But is there really lead in bentonite clay?  And if there is…is it enough to be concerning?

A lot of you have asked me, so I decided to investigate.

Where Did the Concern Come From?

A lot of companies have noted on their packaging “may contain lead.”  One such product is Earthpaste, the toothpaste that I choose to use (and still do, by the way).  This, naturally, lead to consumer concern.

The reason for this is because of the Prop 65 law in California.  This law was enacted in 1986, and is a list of (now) over 800 chemicals that may cause birth defects, cancer, or reproductive harm.  New chemicals are being added to the list every year, as new research is done.

If a chemical is on the list, then businesses must make their customers aware if they use it, even in small amounts.  If there is any possibility of any of the chemicals being in products or used within buildings, most companies are opting to label up front.  If they don’t, and someone calls them on it, they can face major fines or civil lawsuits.  So most businesses are opting to just label rather than face these potentially steep financial penalties in a “CYA” move.  With fines as high as $2500 per violation per day it’s not hard to see why a label is an easy solution!

Labeling is a good thing.  It allows consumers to make their own choices about what might or might not be safe for them, and what they want to purchase.  Unfortunately, in this case, it seems to have muddied the waters a bit — is there really lead in clay?  And is that dangerous?

Now that we know where the concern came from, let’s look at the actual issue: lead in clay.

Is There Lead in Bentonite Clay?

That’s the short answer, but in and of itself it doesn’t mean a whole lot.  Let’s look more closely at how much lead is in clay, and how that compares to other substances.

In general, the amount of lead is tiny.  Most unprocessed foods contain 0.02 to 0.4 PPM.

The EPA says that the average amount of lead in uncontaminated soil is 50 – 400 PPM, or much, much higher than in either clay or food.  This amount is considered safe.  So what we know so far is that yes, bentonite clay contains lead, but it isn’t much and the level isn’t dangerous.

Could clay’s health benefits possibly outweigh even the minute traces of lead it contains?

This study shows that clay can be used to remove fluoride from water, due to its absorptive and adsorptive properties.  (Absorption = pulling stuff into itself, adsorption = attracting stuff to the outside of itself.)

This study is a fascinating look at the role of clay in human health.  Clay’s adsorptive properties can help to heal ulcers, diarrhea, infections, and more (including MRSA and E. Coli).  Different types of clay have different properties — this study looked at many of them, including bentonite and French green clay.  Some can even be used as a mineral supplement!  (Others can’t because they will bind with minerals and actually could cause a deficiency.)  In general, the use of edible clay in humans is fairly well-studied, generally safe (especially in small doses), and frankly just really cool.  🙂

This study actually shows that some types of bentonite clay can be used as a purifier to remove lead from water!  (This study shows the same, removal of lead from other contaminated sources.)

There’s nothing in the scientific literature showing any harm caused by lead.  In fact, the worst harm caused by clay is if large amounts are ingested daily (200 mg or more) — it binds with zinc, magnesium, iron, and other necessary minerals and could lead to deficiencies.  But there’s nothing in the clay itself that’s causing any issues.  And this is easily avoided by using clay internally only as needed (when you are experiencing digestive distress or illness).

Using clay topically or as a toothpaste, especially if not swallowed, is no issue at all.

I always have clay in my house, and plan to keep it that way.

There’s simply no scientific evidence that there are dangerous levels of lead in clay, or that taking clay can cause any particular harm.  Clay absorbs or adsorbs much greater amounts of minerals than it ever gives off, because of its molecular properties.  Given that it’s been shown to have so many health benefits — which are backed up by peoples’ experiences, too — there’s no reason at all to avoid it.

I keep Redmond Clay on hand — powdered mostly, plus Earthpaste and hydrated first aid clay.  I have also purchased powdered clay from Mountain Rose Herbs in the past.  (I kind of want to get my hands on some French green clay after reading that study!)

Do you use bentonite clay in your home?  Have you been concerned about lead?