Superfoods That Might Not Be Super For YOU |
AD 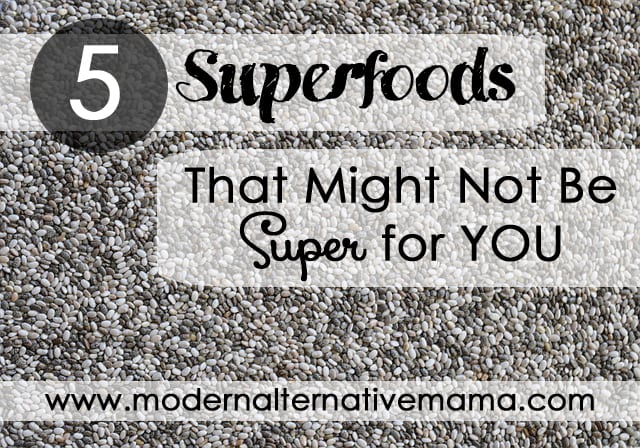 When it comes to healthy diets, superfoods are often mentioned. Here’s a look at these “superfoods” and whether they are really that “super”.

As part of our month of introducing baby steps to healthier eating, I wanted to talk about “superfoods.”  Oftentimes, when we are just starting out or learning more about healthful living, we can get sucked into believing certain foods or supplements are good for us because they’re promoted as superfoods, or foods that have an abundance of health benefits.  While many foods are worthy of the superfood title, some aren’t all they are cracked up to be, particularly for specific individuals whose bodily makeup may make consuming the foods worthless or even harmful for them.

While chia seeds are touted as a superfood on nearly any list you might come across, they may not be as beneficial as you think.  True, they have a nicely balanced omega content and most modern diets tend to be too rich in omega 6, but the problem is that your body may not be able to make good use of these good fats.

Plant-based sources of these omega fats come in the form of alpha-linolenic acid (ALA).  In order for your body to use ALA, it must be converted to eicosapentaenoic acid (EPA) and docosahexaenoic acid (DHA), the bioavailable forms of omega-3 fatty acids.  While our bodies are capable of making this conversion, many of us lack the enzymes to do so efficiently.

Furthermore, chia seeds (and other plant-based sources of omega fats such as flax seeds and walnuts) lack the fat-soluble vitamins A and D.  Instead, taking a high-quality fish oil is a better choice, as the omega fatty acids are already in the highly usable forms DHA and EPA, plus fermented cod liver oil is an excellent source of vitamins A and D, particularly when combined with high vitamin butter oil.

Although many of us are already on to the fact that soy is bad news, it bears repeating here because soy continues to appear on superfood lists everywhere.  I, too, went through a short phase when I thought soy was a health food and gave soy milk to my kids.  Thankfully, I learned quickly that consuming soy is harmful to our health.

The book “Cure Tooth Decay” by Ramiel Nagel details some of the problems with eating soy:

“A friend of mine thought eating large portions of tofu was a good idea. In a short time, her hair began falling out and her skin turned pale. Soy contains plant hormones that need to be disabled through a careful fermentation process, which tofu does not undergo. High levels of phytic acid in soy reduce the assimiliation of calcium, magnesium, copper, iron and zinc. Phytic acid in soy is not neutralized by ordinary preparation methods such as soaking, sprouting, and long, slow cooking.  High phytate diets have caused growth problems in children. Fermented soy products, such as special fermented soy drinks (not available in the store), natural soy sauce, miso and tempeh can be acceptable.  However, use fermented soy with care and awareness.”

Furthermore, popular soy protein supplements which are often put in smoothies or shakes should be avoided as well, as soy protein blocks iron absorption even when all the phytic acid has been removed.

Perhaps the most detrimental component of soy, however, is its phytoestrogen, a plant-based chemical which mimics estrogen in the body.  It has been estimated that infants fed soy formula have 13,000 to 22,000 times the amount of estrogen in their little bodies than infants fed other types of formula or who are breastfed.  In fact, infants fed soy formula take in an estimated three to five birth control pills’ worth of estrogen every day.

Perhaps one of the biggest surprises to most health-minded folks is that raw, leafy greens should be eaten in moderation (or even avoided by some)!  It is just simply “understood” that these vegetables are nutrition powerhouses and we should eat them as much as we can.

However, there is cause for concern, especially for particular people.  Dark, leafy greens — like kale and spinach — contain a large number of oxalates, the salt form of oxalic acid.  Oxalates are extremely painful when deposited in the body, and are the cause of the majority of kidney stones.  Because one’s genetics have an effect on the body’s ability to detox oxalates, it is hard to determine who may have a particularly difficult time eating high oxalate foods.

However, in my case, the apple doesn’t fall too far from the tree because my own mother has suffered from kidney stones, and now I, myself, have suffered twice.  I don’t eat a particularly high oxalate diet, but this is something I know I have to be mindful of, so I only eat raw greens a handful of times a month.

Another problematic component in these raw vegetables is that they contain chemicals called goitrogens.  Goitrogens may inhibit absorption of dietary iodine.  This decrease in iodine can be especially problematic for those who suffer from hypothyroidism, a condition where your thyroid gland does not produce enough hormones.  Because goitrogens are greatly diminished by cooking, eating them cooked should be okay for those with hypothyroidism.

A breakfast staple in kitchens everywhere, oats might not be the great breakfast superfood they’re believed to be.

Because oats contain resistant starch (a type of starch that resists digestion), at least some of the oats you consume will stay behind in the gut as fermentable material.   Assuming you don’t have any conditions that preclude you from consuming oats (such as Celiacs, more on that later), it’s important for oats to be soaked before being cooked and eaten.

Scientists have learned that the proteins in grains are very difficult do digest.  All grains contain phytic acid in the outer layer (the bran).  Phytic acid combines with minerals in the digestive tract and prevents them from being absorbed.  Soaking oats overnight can reduce the phytic acid content, but digestion of oats may still be difficult for some.

While the oat-based granola is heralded as an essential snack for “crunchy” people everywhere, this cereal food might do more harm than good.  This popular “health” food is subjected only to dry heat and is therefore extremely indigestible.  For those with celiac disease, oats should be avoided, unless they are certified to be gluten-free, as most oats are cross-contaminated by gluten.

There are some good reasons that quinoa frequently shows up on superfood lists, as it is a fairly high-protein plant food.  However, if it’s protein you’re after, there are better sources.  Obviously, meat contains the most protein per serving (an average of 20+ grams, depending on the type of meat), while just four ounces of cottage cheese contains 13 grams.

A whole cup of quinoa contains only 8 grams of protein.  Quinoa is comprised of 70% carbohydrate, 16% fat (mostly inflammatory omega 6), and 14% protein, making it primarily a carbohydrate source.

Like oats, quinoa also contains anti-nutrients, including the dreaded phytic acid.  To combat this, soaking or sprouting methods can be used, but quinoa may still be indigestible for some.  In addition to phytic acid, quinoa also contains saponins, a bitter tasting chemical coating created to deter pests.  This can be mostly removed by good rinsing.

Quinoa also contains lectins, which act as another natural pest deterrent by causing intestinal problems for those that consume them.  These lectins can cause small holes to form in the gut, contributing to leaky gut syndrome, which leads to a host of health problems, including autoimmune disease and food allergies.  Soaking, sprouting, fermenting and cooking quinoa can reduce the lectin content, but it will not remove them entirely.

Finally, those with celiac disease should exercise caution when consuming quinoa, as two strains are known to cause digestive distress for those suffering from celiac, and it can be difficult to determine which strain you are getting from the package and nutrition facts alone.

Though some of these foods do have redeeming qualities, they may not deserve the title of “superfood,” for reasons detailed in the above paragraphs.  It’s for each person to decide which foods work well with their body and which foods make them feel unwell.  Promoting a “superfood” as a “one-size-fits-all” nutritional powerhouse may not be the best approach, as dietary needs vary from person to person.

It’s my opinion that individuals’ diets should be varied as well, containing lots of different foods to meet lots of nutritional needs, and to keep in mind that moderation is key.  I myself enjoy most of the foods on this list occasionally (except soy!), and find that I suffer no ill effects from eating them, but I don’t count on any of them to meet any major nutritional needs.

I wanted to give you a quick list of my personal superfoods!  Again, noting that not all of these will be beneficial for all people, as we all have different needs and intolerances.

Liver is packed with B vitamins, minerals and folic acid, which makes it especially great during pregnancy.  It also contains a mysterious “anti-fatigue factor” that I can attest to!  Don’t like liver?  No problem, read here about how to easily get it into your daily diet.

Avocado contains a host of healthy fats, as well as a good amount of vitamins and minerals and even a little protein.  This delicious fruit lends itself well to salads as well as puddings and ice creams!  Plus, who doesn’t love guacamole?

Grassfed, raw milk has become a staple food in our home since I first gained access to it over two years ago.  It is an excellent source of highly absorbable vitamin K, an easy way to get in some quick protein for busy mommas, and contains lots of good fat in the cream.  Raw milk is a living food, as the enzymes and good bacteria which are killed by pasteurization remain intact, making raw milk much easier to digest for many people, including those diagnosed with lactose intolerance!  Plus, it just tastes wonderful.  I frequently make raw milk ice cream in my house, sweetened with raw honey!

What foods would you add to a “superfoods” list?

(2) Davidson, Lena (1996) Macronutrient Interactions: Impact on Child Health and Nutrition by US Agency for International Development Food and Agricultural Organization of the United Nations

(3) and (4) Mercola, Joseph (2008, January 02) Soy Formula: The Popular Food You Should Never, Ever Feed Your Baby . Retrieved from http://articles.mercola.com/sites/articles/archive/2011/04/02/soy-formula-linked-to-fibroid-tumors.aspx

(5) Shaw, William (2010) The Role of Oxalates in Autism and Chronic Disorders