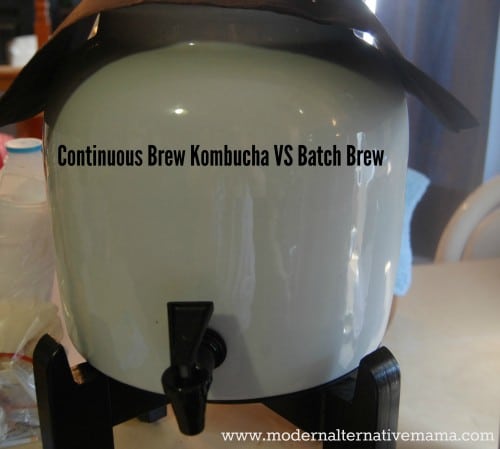 It’s no secret that I’ve been brewing kombucha for a few years now.  It was one of the first “real food” projects that I took on, and one that I’m still doing now.

A couple years ago, I even put together a video on how to brew kombucha, as well as an ebook all about it.  (You can get that ebook for FREE when you subscribe to my weekly feed.)  Here’s the video:

At the time, I wasn’t so sure about the continuous brew method of kombucha.  I hadn’t tried it, and I assumed that it would be less beneficial.  So, I recommended against it.

More recently, I’ve come across new information that’s made me rethink that stance.  I now have a nice ceramic continuous brew crock sitting in my kitchen!  This was sent to me courtesy of the Get Kombucha company, who offer kombucha kits (both continuous brew and batch brew).  They seem to prefer the continuous brew method.

Let’s take a look at how they differ…and why you might be better off choosing continuous.

My main criticism of the continuous brew method two years ago was that by constantly adding new sweet tea to already-fermented tea that you would end up with a sugar content that was too high.

As it turns out, this is probably false.  This is why it’s so important to research things instead of assuming based on what “seems” like common sense!

With batch brewing, you mix sweet tea with already fermented kombucha, add a SCOBY, and allow it to sit for a week or two.  Most people probably like it around 8 – 10 days, give or take a few.  This is just as described in the video above (which is why I’m glossing over it).

At the end of the brew cycle, all of the kombucha is bottled (except 1/2 – 1 c. to get the next batch going), either plain or with some kind of flavoring.  If flavors are added, the bottles are left to ferment, sealed, another 2 – 3 days before being refrigerated.  Then, the kombucha is restarted in the same manner.

In contrast, continuous brewing is like it sounds — constant.  It starts out the same way, by mixing sweet tea with already fermented kombucha and adding a SCOBY.  Initially, it will need to sit about a week, give or take.  But here’s where it differs.

About 20 – 30% of the kombucha is drawn off via a spigot.  It can be drawn directly into bottles, with a bit of flavoring (if desired) added, or it can be drawn straight into a cup for consumption.  Then, an equivalent amount of sweet tea is added to the crock, and fermentation continues.  The SCOBY is never removed and most of the kombucha isn’t disturbed.

Once the brew has been going for awhile, you can draw off up to 20% every 3 – 4 days (most do it more like every 7), always replacing with sweet tea.  The crock is only drained twice a year for cleaning; otherwise there is always kombucha fermenting.

So, it’s up to you what you want to try.  I’m excited to be foraying into the continuous brew method now.  I think that it will better fit the stage of life we are in now.  We are busier and having five minutes here and there is more likely than a full hour every couple of weeks to devote to something.  It used to be easier the other way, for sure — but things change.

In a couple of weeks, I’ll report back to you on my experiences with the continuous brew system (we just set it up) and let you know how we feel about it.  I’ll also be sharing with you several different ways to flavor your kombucha.  We’ll get creative with it!

Here’s the SCOBY I got with my continuous brewing kit from Get Kombucha (they sent me their silver kit):

How Kombucha Saves Money…and Other Ways to Save

Have you ever priced a bottle of store-bought kombucha?

I admit I’ve been buying it more often than I should lately, as I’ve been between systems and haven’t had my own brew.  But yikes, it’s expensive and I need to quit that.  A store-bought bottle is typically $3 – $4 for 16 ounces.  Yeah.

At home, I can brew a gallon for around $1.  Yes, a full gallon for $1!  That makes it a super, super frugal option.  I buy organic tea and organic sugar in bulk just for kombucha brewing (and the occasional fun treat of plain old sweet tea).

Fermented foods, like kombucha (as well as water kefir, milk kefir, sourdough, etc.) are a great way to increase your family’s nutrition.  Yet, if you can find them at the store at all — which is difficult — they are very expensive.  A good quality loaf of true sourdough bread is around $5.  Who has that kind of money to spend on bread?  Meanwhile, you can make a loaf for $1 or so (depending on ingredients.  A simple loaf that uses flour, salt and water will be cheaper than one that uses milk, eggs, butter, and honey too).

I really feel good about including these nutrient-dense, homemade foods in my family’s diet.  I know that I’m saving money but providing the highest quality I can.

This was the premise of a book I recently contributed to, called Frugal Secrets of Real Foodies.  In it, you’ll find lots of budget-saving tips, plus recipes for water kefir, sourdough breads, and lots of other frugal, healthy foods.

Do you brew kombucha?  Which method do you prefer?