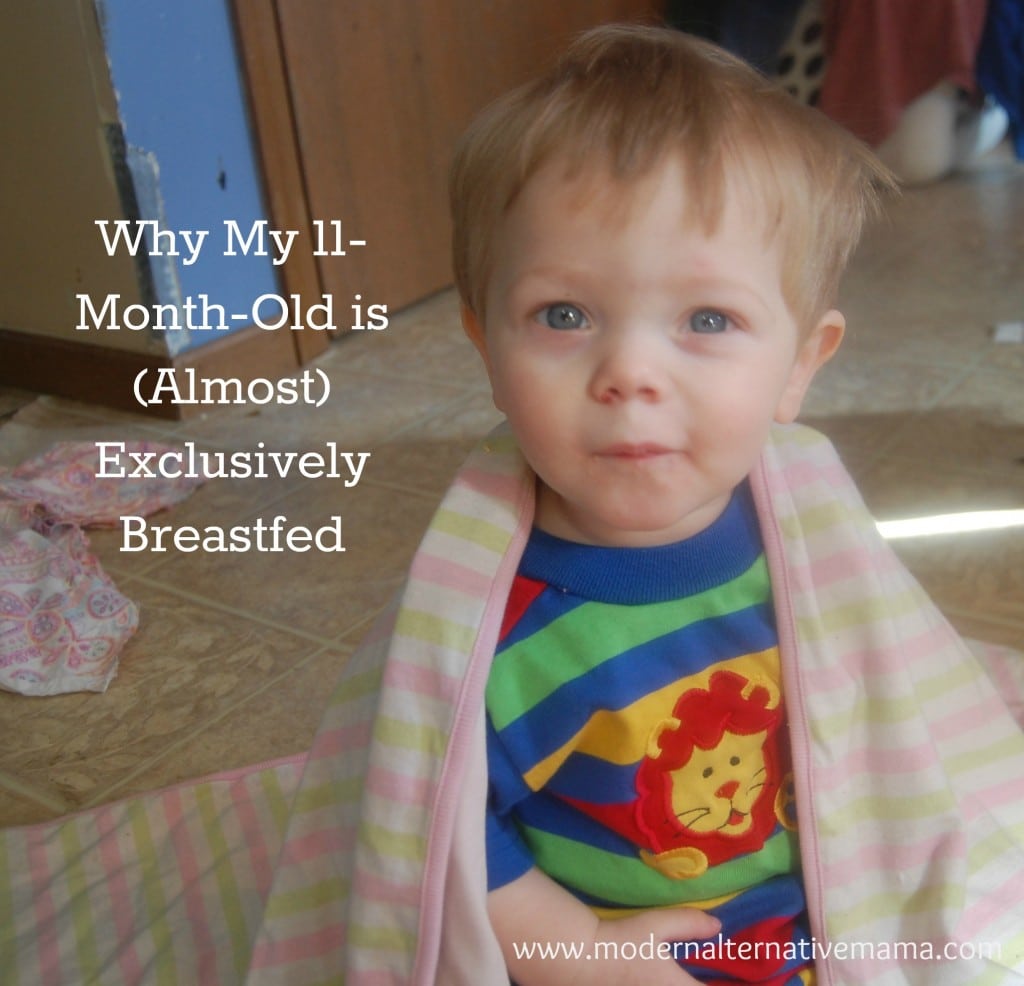 Why My Eleven-Month-Old is (Mostly) Exclusively Breastfed

Here’s a post I never thought I’d write.  I’ve heard the saying “Food before one is just for fun,” lots of times, but I kind of snickered.  Really?  They obviously haven’t met my babies….

It’s true.  My older three kids all ate a significant amount before they were one.  My oldest (when I was still eating SAD) was given solids from 4 months and ate a decent amount by 6 months, and was eating more food than nursing by a year.  My second and third began eating around 7 – 8 months using baby-led weaning, and by 9 months were eating quite a lot (and also nursing quite a lot).  I did not understand how anybody’s baby could be eating little to nothing at these ages!

And then I had my fourth.

The six-month mark came and went.  We offered him tiny tastes of what we were eating.  He invariably made faces and refused it all.  He hit seven months…eight months…nine months.  More of the same.

Does he eat anything?  Yes.  He eventually found a few things that he liked.  He will eat small amounts of these foods now and then.  In general, he is not impressed.

It’s also true that from 6 – (almost) 10 months, he would often gag on certain textures.  And it was weirdly unpredictable.  He could find a sheet of seaweed that the other kids were eating and do fine with it, but mashed potatoes would cause him to choke.  Mostly it was the thick foods that didn’t dissolve easily that he didn’t like.  He was a kid who would have needed purees for sure if we had wanted to push solids earlier.  But we didn’t.  Now, at 11 months, he doesn’t gag on food much at all.

He’s happy and meeting milestones – crawling, pulling to stand, cruising, waving, saying a couple words.  He’s a very happy baby who loves his siblings and loves to play.  If he wants the “good” toys, he’s hearned he has to wait until the other kids aren’t watching, then quickly grab.  Ha!  The beauty of being the fourth.

The point?  He’s healthy and happy just on breast milk.

He does, now, eat a bit here and there.  We put small bits of cheese on his tray.  He finds food the other kids have (recently) dropped and starts taking bites out of it.  He even enjoys it sometimes.  But when he’s truly hungry, he goes looking for me, and milk.

The thing is, all babies truly are different.  Some are honestly hungry and want to eat a fair amount at 6 months.  Some really aren’t that interested even past a year.  It’s okay, however it works out.

I would encourage each mom to pay close attention to what her baby needs.  The recommendations that you “must” start solids by 6 months, or you “shouldn’t” push them until 12 months don’t matter a bit.  Every baby has different needs, and it’s up to you to know what your baby is telling you.  There’s enough research and enough opinions out there to find the one that agrees with you, but why bother?  Go with your gut.

I say this because it’s easy to get caught up in recommendations and feel like your baby “has” to eat in a certain way.  But that’s not true.  I have heard mothers tell me that they started their baby on solids at 6 months, and that the baby would turn his or her face away and spit the food out and seem unhappy, and how they “needed to make them eat” because it was time.  Why?  They’ll get there when they’re ready.

Raising kids just isn’t about one right way.  It’s about knowing what your kids need, and making sure they get it.

So, that’s why my 11-month-old is (mostly) exclusively breastfed.

For those who are curious, here’s what it looks like in my home.

We still co- sleep.  He spends about half the night in a pack-n-play next to our bed, and about half in it.  Before bed, he nurses twice – once, sleeps for a short time, and nurses down again, then sleeps for a couple hours (usually until I come to bed).  He nurses anywhere from 3 – 8 times throughout the night.  He nurses more at night than during the day, and yes, he’s truly hungry each time (he “finishes” both sides each time, sometimes even goes back and forth a few times trying to get more once the milk has slowed down).

During the day, he nurses every 1.5 – 3 hours.  He does not go longer than 3 hours (and if he ever does, I pay for it – he finishes both sides and acts fitful and still hungry for the next couple feedings).  He nurses to sleep usually for naps and sleeps 2 – 3 hours on his own (I get up after he falls asleep).  When my husband is around, he sometimes falls asleep on his own, sitting on the bed with Daddy in the room.

Some nights, if we are having something for dinner that he can have (we keep it mostly grain-free for him), I offer him a small amount.  We don’t do this every night and he rarely takes much.a

My instincts have told me to wait and go slow with him, whereas I felt very free in giving the other kids most anything by 8 – 9 months.  And he’s healthy, happy, and growing well so it must have worked.

When did your baby(ies) start solids and why?