Is Rice Cereal The Best First Food For Baby? |
AD 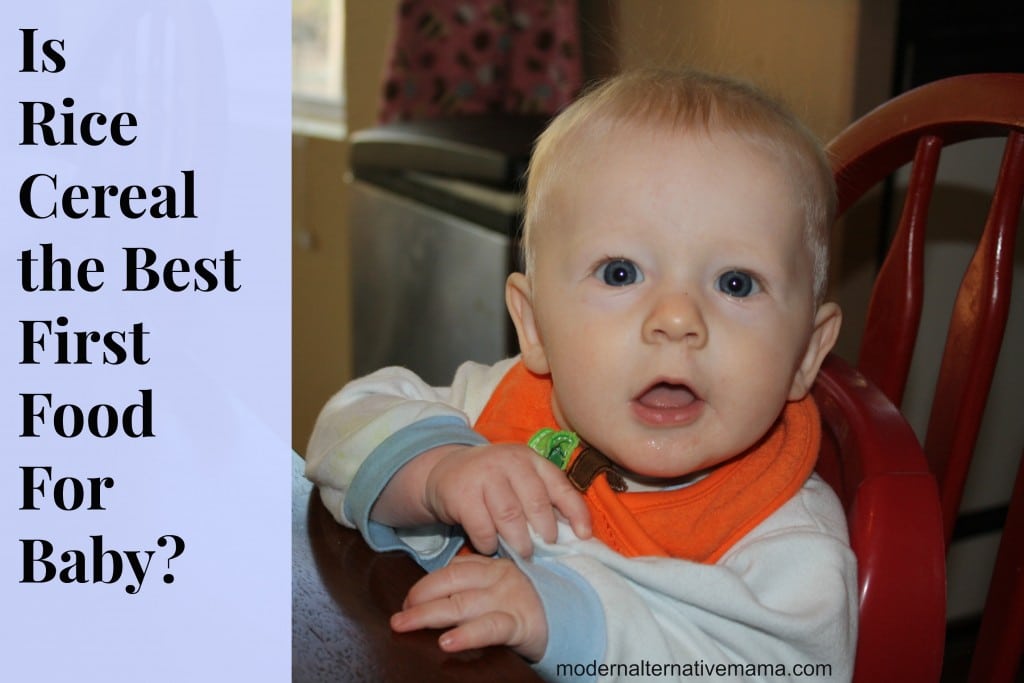 Is Rice Cereal The Best First Food For Baby?

When it comes time to start feeding babies solid foods, there are lots of opinions. Rice cereal is commonly suggested as the best food to start out with. Is it really the best option though?

Have you ever wondered how rice cereal became the most recommended first solid to feed babies? I always just assumed that when I had kids I would feed them rice cereal and baby food. However, after the traumatic birth of my first-born son, I began to question most things that are considered standard these days.

In fact, the whole idea of rice baby cereal seemed counter-intuitive. After all, it is highly processed and full of synthetic vitamins, which we generally try to avoid. So I did what I always do and dove head-first into the research.

Why Does Everyone Start with Baby Cereal?

The first question I had to ask myself was: “Why is rice cereal so popular?”  The answers seem pretty clear.

1) Rice cereal is fortified with iron. After about 6 months of age, babies need to find other sources of iron besides breastmilk or formula, so many choose fortified baby cereals. (1)

2) Rice cereal is hypoallergenic. Many pediatricians recommend starting with rice cereal because it is a single grain and it is rare to have a rice allergy.

3) Many tired, but well-intentioned moms have been told that feeding their baby rice cereal will help them to sleep longer at night. (Even though recent studies have shown babies fed rice-cereal before 4 months slept less than babies who had no solids.(2))

4) Many parents feel the bland taste of white rice and smooth texture make it a perfect food for teaching a baby how to swallow solids.

First, we must remember that infants have survived and thrived for thousands of years without eating rice cereal. Rice cereal wasn’t even invented until around the time of the Industrial Revolution (3), therefore, it is clearly not a NECESSITY.  However, as a convenience, is it good for our babies? I don’t think so and I’ll tell you why.

It is important to feed our babies nutrient-dense food.  At such a young age, they don’t eat much, so what they do eat really needs to matter nutrient-wise.  Although white rice cereal is fortified with synthetic vitamins, there are many other real-food options that contain more nutrients and are much healthier for their little bodies.

White rice cereal is a starch and converted to glucose through the digestion process.  Some research suggests that starting our kids on starchy foods, develops in them a taste preference for starchy foods. This could ultimately lead to obesity and diabetes later on down the road. (4) Now white rice cereal is obviously not the only reason a child may become obese or develop diabetes, but it certainly appears to be a factor.

Rice cereal is fortified with a synthetic form of iron which is not absorbed as readily as naturally occurring iron. Furthermore, introducing iron-fortified foods at an early age can actually reduce how efficiently your baby is able to absorb iron.  Here is what Kellymom.com has to say about it:

“As long as your baby is exclusively breastfed (and receiving no iron supplements or iron-fortified foods), the specialized proteins in breastmilk ensure that baby gets the available iron (instead of “bad” bacteria and such). Iron supplements and iron in other foods is available on a first come, first served basis, and there is a regular “free-for-all” in the baby’s gut over it. The “bad” bacteria thrive on the free iron in the gut. In addition, iron supplements can overwhelm the iron-binding abilities of the proteins in breastmilk, thus making some of the iron from breastmilk (which was previously available to baby only) available to bacteria, also. The result: baby tends to get a lower percentage of the available iron. (5)

But what about organic, whole grain rice cereals? Those aren’t fortified and are not simply starch. The problem with whole grain cereals is the phytic acid.

The bran in the rice (or oats) contains phytic acid which is what stores the phosphorous and other vitamins making it unavailable to us.  Then, to process the phytic acid, our body has to pull calcium to bind with the phytic acid.  Therefore we actually lose nutrients when we eat whole grains that aren’t prepared properly.

You could soak the cereal to reduce the phytic acid and make it more digestible, but it would need to be soaked for around 16 to 24 hours. (6)  If you only consume whole grains sparingly, then it’s not something to worry about too much. But if it’s something you are planning to feed your baby every day as their main solid, then I would definitely reconsider.

There is a lot of information out there that says children are not able to digest starches until they cut their molars (sometime between one and two), because they lack the necessary digestive enzymes. (7)(8)  However, I could not find any reputable study that confirms this.

In fact, several studies show that there is a considerable amount of the digestive enzyme amylase in breastmilk which could help a baby break down starch. (9) So if you are breastfeeding an older infant, then you are giving them the tools they need to break down starches.

Even though it does look like older breastfed babies are able to digest starch, I still don’t think that’s reason enough to feed them baby cereal due to the previously listed issues.

So What Should I Feed My Baby?

Egg yolks and avocados are two great foods to start the transition to solids with.  They are both high in the necessary and important healthy fats, nutritious, and easy to prepare. Liver, sweet potato, broccoli, bone broth, and carrots are other great nutrient-dense options.

How do you feel about baby cereal?