90 Seconds That Could Change Your Baby’s Life |
AD 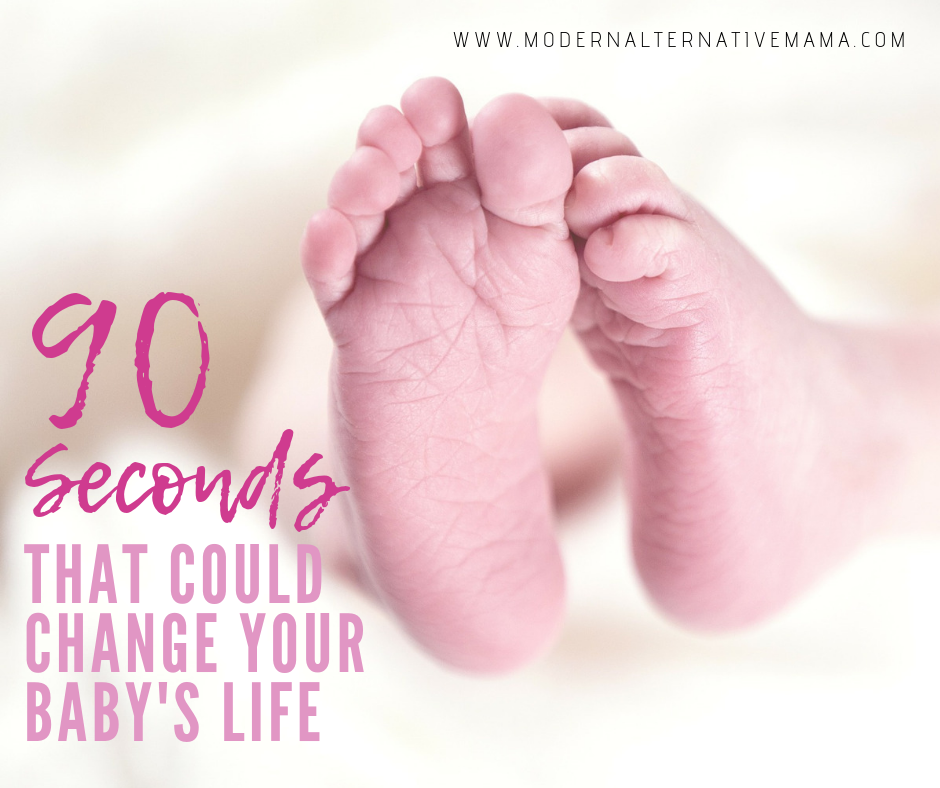 90 Seconds That Could Change Your Baby’s Life

What if I told you that there is a decision you can make for your unborn baby that has the potential to drastically increase his quality of life for years to come that is FREE and takes only 90 seconds to implement? Unbelievable, right?

Dr. Alan Greene does an amazing job explaining the important concept I want to introduce to you today in this 15 minute TED talk. I encourage you to watch it first if you can (it’s really well done), but if you are in a hurry, just skip down a bit for a recap and more details.

In 1913 an idea took hold in the medical community that has potentially decreased the intelligence, productivity, and “quality adjusted life years” of people worldwide. To prevent postpartum hemorrhage and facilitate treatment or resuscitation of babies in distress, it was decided that the “third stage of labor” (birth of the placenta) needed to be actively managed by:

These measures have become common practice among care providers. Despite good intentions, each one has negative unintended consequences to weigh. Immediate cord clamping in particular poses risks that have been under-emphasized and need to be brought to light.

When a baby is born, one third of his blood volume is outside his body! While in utero, the umbilical cord routes all of the nutrients and oxygen baby needs from mother – through the placenta. Generally, the placenta is still attached when the baby is born, and for a time – 3-5 minutes or longer – the placenta and cord continue to pump blood back into the baby.

The photo collage above is a great example of this process – these photos were taken over a 15 minute period. (you can read more from the source here) Waiting to clamp and cut the umbilical cord means your baby receives 1/3 more life-giving blood!

The blood flowing through the umbilical cord is rich in oxygen and babies’ brains continue to benefit from it even after their lungs have filled the first time. As Dr. Greene points out in the video,1 out of 10 children in the world get sub-optimal amounts of oxygen in the first few minutes of life. This leads to problems ranging from decreased intelligence to cerebral palsy.

The WHO claims that about 25% of the world’s population suffers from anaemia – many due to iron deficiency. Immediate cord clamping increases the risk of developing Iron Deficiency Anaemia by 10 times! Iron deficiency is also the most common nutritional deficiency in the world, and preventing it would increase national productivity 20%.

You can’t pick up a pregnancy magazine without seeing two or three full page ads for stem cell banks these days. We don’t yet know exactly how important stem cells are or how they will be used, but the potential is great. For an insightful look at the pros and cons of banking your baby’s cord blood as well as a couple of wonderful videos, I recommend this post by Midwife Thinking. If you choose not to use a cord blood bank, you can still gift your baby with more stem cells by waiting to clamp his cord.

In his TEDx talk, Dr. Greene introduced his initiative called TICC TOCC – which stands for Transitioning Immediate Cord Clamping To Optimal Cord Clamping. He asks care providers to wait as little 90 seconds, or until the cord stops pulsing, before clamping. The current standard of 25 or so seconds is what he calls “immediate,” but he hesitates to use the term “delayed cord clamping,” opting instead for “optimal cord clamping.”

With birth plans becoming more common and the ability to easily spread information via the internet, hopefully care providers will soon become more aware of the benefits of Optimal Cord Clamping. If you know someone who may not have read about OCC, please consider directing them to this post or to Dr. Greene’s TICC TOCC campaign.

How long did you wait before clamping the umbilical cord?