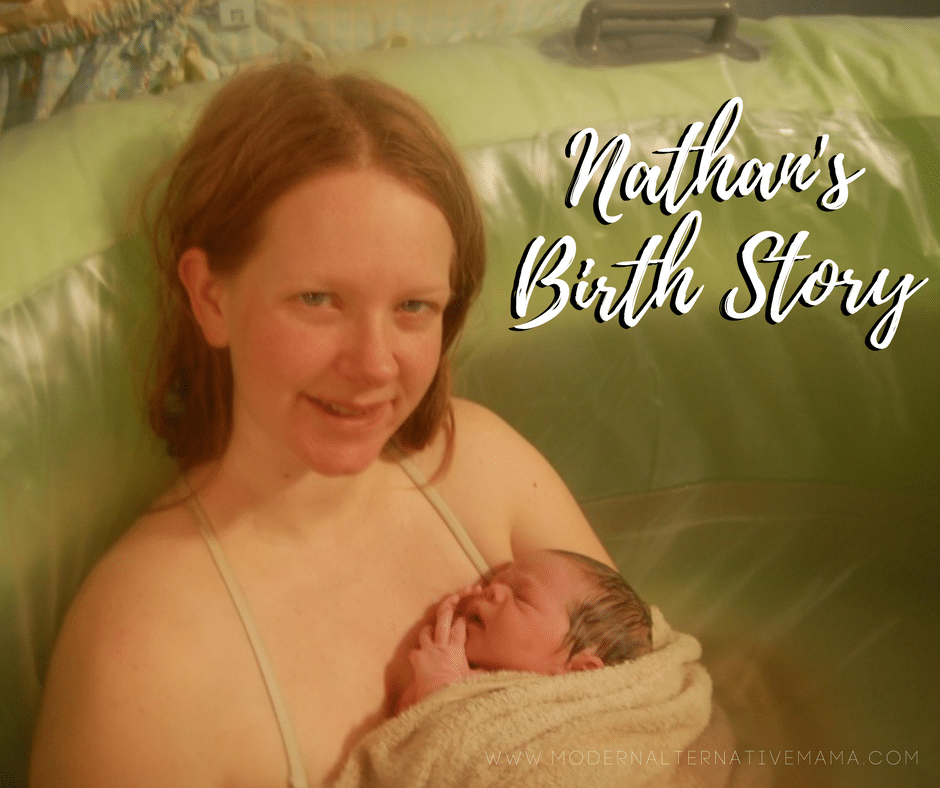 I have my third little boy (and fourth child)!  I am still so excited to say “my boys” and see all of them!  Nathan is a week old as I write this.  I have been on my computer only rarely this week as I have been enjoying baby snuggles and lots of rest (in fact I am holding him now!).  It has been so nice to take a little break and enjoy these early days; they go so fast.  Already he looks bigger and “older” to me and I can’t believe it!

I’m here to share my birth story with you.  It’s fairly short and sweet. 🙂

I woke up Saturday, March 9th (my birthday and due date) still pregnant.  I was determined to have a relaxing day with my family.  It was in the 50s, so we went to a park for awhile.  I walked about a half mile on the track there while the kids played with Daddy.

I rested all afternoon and accepted late in the day that baby might not come a few days yet.  I’d been waiting for things to start all week but decided to just be happy with the final days.  I was sleeping well and not very sore; it was emotionally harder to wait than anything.  Still, I was “fine” so I changed my attitude.

I set to making homemade cheeseburger mac’n’cheese for dinner.  As I was serving it to the boys (who love it), I realized I couldn’t eat it.  I felt very spacey and out of it.  I realized the baby might be coming.  This was around 7:30.

I rushed the kids off to bed, wanting a chance to rest before things got going.  I still wasn’t sure after many “false alarms” in the past week or so, but this seemed different somehow.

Mere hours before he was born — I suspected this was my last chance to take a picture!

Around 9, contractions started.  They were irregular and fairly mild, but I knew they were real.  I texted one of our midwives around 10 to give her a heads up that we were likely going to see a baby that night, and that I was going to bed.

We stayed up to watch another show then headed to bed a bit before 11.  The contractions were stronger and more regular but nothing I couldn’t handle.  I hoped we’d all get a little sleep before things picked up.

Then, around 11:30, things got a lot stronger.  I was now sure this was happening,  I called my mom first since she lives two hours away — I wasn’t sure she’d make it, even though it was still “early.”

I headed back to bed to try to cope alone as long as I could so Ben could sleep.  Within 10 minutes I sensed things were going fast, so I woke Ben and told him so.  He said, “Are you sure you want me to fill the birth pool now?”  I was sure.

It gets a bit fuzzy from here.  It was around midnight and Ben started filling the pool.  I was back and forth from bed to bathroom.  I called the midwife, Amy, and told her it was happening.  She said to time contractions and check dilation and call her back in an hour.  I knew that it was happening now but couldn’t explain it plus I wasn’t sure I wanted anyone yet, so I said okay.

I tried to help with the tub filling in between contractions but realized I needed to get in bed and relax with them.  They were getting stronger and stronger.

The hot water ran out with the pool only a few inches deep.  This was bad because I quickly realized I needed to get in the tub to cope.  Eventually, I just got in anyway — at least I could pour water on my belly.  I splashed it on almost frantically during strong contractions and begged Ben to fill it more in between them.  He ended up having to boil water on the stove to fill the pool more.  I had to have it.

Sometime during this, Ben realized we should call the midwives again, so he did.  For the most part, he was sitting next to the pool or dealing with the water.  I was lying on the floor of the tub, trying to get my belly under as much as possible.  I was needing to breathe through contractions by this time.

The first midwife showed up.  She tried to get the baby’s heartbeat with the Doppler, then the fetoscope, but couldn’t.  Baby had been moving frequently during labor so I was not worried.  I pushed her hands away because the pressure of the Doppler made contractions hurt more.  I was close to pushing anyway.  I kept telling myself it was almost over, almost done, because it was really hard at this point.

Ben had gone down to check on the water and I told the midwife to get him back.  He was sitting by the tub.  The midwife asked if I wanted her to check me for dilation — I said no.  I was checking and the baby was right there.  There was a tiny anterior lip of cervix and that was it.  I stretched it and pulled it off the baby’s head (which actually didn’t hurt much, probably because I did it myself).  Then I started pushing.

With the first push my water broke, which I told them.  I got about a minute of rest, then another contraction came and I was pushing again.  I always go for it because I know it’s almost over and I’m ready to be done!

I tried to get up on my hands and knees like I did with my previous birth, but that hurt more so I said “nope” and flipped back over and sunk down into the water.  I scooted up some to be more upright to push, but stayed sitting.

Quickly, his head was out.  Ben had been sitting and watching and called the midwife over.  She checked for a cord around the neck — no.  I pushed again and he was out!  The midwife guided him to Ben, who picked him up and put him on my chest.  He said, “It’s a boy!”

A towel was draped over us and we snuggled in.  Nathan screamed for a few seconds (despite that we had a space heater on and it was quite warm in the room; he didn’t like being pulled up out of the water).  The second midwife arrived a few minutes later to find us resting in the tub!

We stayed in until after I delivered the placenta.  He is my first baby to actually be born in the water!  Then we got out and moved to the bed.  Nathan latched on to nurse quickly, doing it himself before I was even fully settled!  He nursed for quite awhile.  My parents had arrived about 10 minutes before he was born and came up to meet him.

My dad and Ben quickly took the pool down.  As we had used a liner, it didn’t even need cleaning.  Then we just enjoyed the little one!  In total I was in labor less than 5 hours, about two hours of “hard” labor.

Nathan got his newborn exam and got dressed.  We took some pictures.

I took a bath with my herbal mix.  I didn’t tear at all!  I wasn’t sore, either.  My round ligaments hurt and so did the afterpains.  I used a cramp tincture and arnica to help.

We turned off the lights around 4 or so (time change!) and the midwives left.  My parents went downstairs to sleep.  We curled up with Nathan on the bed between us and fell asleep.

Around 6:30, my 3.5 YO Daniel came in.  We introduced him to his new brother.  He said, “He’s beautiful, I love him!”  He was thrilled.  My 5 YO said roughly the same when she came in 20 minutes later.  An hour after my 1 YO came in.  He was quite interested in the baby but still seems to think of him as a novelty.  If we say “Look at your brother!” he simply looks around for the 3YO. 🙂  My daughter begs to hold him constantly and even sat still for an hour and a half one afternoon as he napped in her lap!

Nathan is a very calm and sleepy baby who loves to be snuggled and nurses a lot.  We estimate that he already weighs a pound over his birth weight!  I hold him almost constantly, although others frequently fight for the privilege too!

I’ll write about my recovery another time but it’s been quite easy in general.  I have had less pain and bleeding than any other time.

We are enjoying our new little man. 🙂