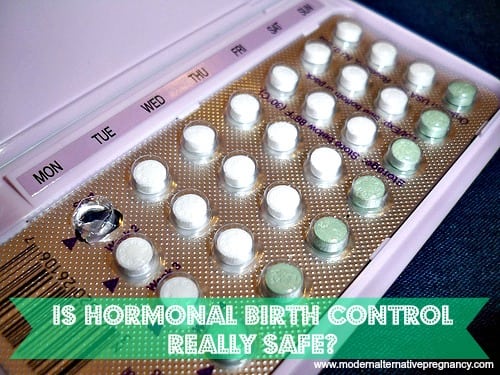 I’m no stranger to hormonal birth control. Before I decided to stop using it, I’d tried almost everything – the pill, the patch (turns out, I’m allergic to adhesives of all kinds), the ring, the mini pill and even a new (at the time) injectable method. I only did that one once, though, as I’m not fond of shots. I chose that in lieu of Depo because I had a few friends who had gotten pregnant while using it and knew still more who lamented their uncontrollable weight gain since starting the shot. Not worth it, I decided.

Later, after my 2nd child was born, I decided that I was done with using medication to prevent pregnancy. Shortly after her birth, I had already begun taking the mini pill at my doctor’s recommendation. This form of birth control is often prescribed for nursing mothers because it only contains progestin, which shouldn’t interfere with lactation. It shouldn’t, but it did for me. That was one reason why I stopped taking hormonal birth control. There were a few others:

The decrease in my milk supply made me think more about the negative side effects of birth control that I had learned about in a pharmacology class in college. It didn’t make sense to me that it was so highly praised with many side effects being overlooked.

Now, after several years of researching natural health care, especially after learning about women who struggle with hormone imbalance, I question whether or not hormonal birth control is really safe.

Why use hormonal birth control?

The most obvious reason is to prevent pregnancy (our first child was conceived while I was on the pill, so I’m a bit skeptical of its effectiveness). However, doctors also prescribe it to help regulate periods.

Today, several methods of hormonal birth control are available on the market. From pills to patches to implants, women have a wide variety to choose from. One visit to the CDC page on contraception will spell out all of your options, along with the glowing benefits of each one.

Strangely, though, something is missing – the negative side effects. After more searching, I was able to find side effects for the different kinds of hormonal birth control available:

The risks exist, that’s for sure. Any medication you get comes with a laundry list of side effects to look out for, and hormonal birth control is no exception. So why are the risks rarely discussed?

Perhaps women would be less likely to buy these medications if they were more aware of the risks. Perhaps their healthcare providers don’t know much about alternative methods, so they stick with recommending hormonal birth control. Perhaps most women just don’t know that there are other options. I don’t know what the answer is.

I just know that as I became more aware of my body and those things typically touted as safe that really aren’t, it made me think twice about everything – food, cleaners, medications.

While my opinion is that it’s best to know your body and thus use a contraceptive method like natural family planning, to avoid serious complications and hormone imbalance, I don’t like to tell people what they should or shouldn’t do.

I do, however, want women to think about this if they do use hormonal birth control. Do you think it’s safe? Is this something that you really feel comfortable taking? Is there another option that makes more sense? Do you feel that the benefits outweigh the risks? Were you told about the risks?

Do you think hormonal birth control is safe? Why or why not? Do you know what your other options are?