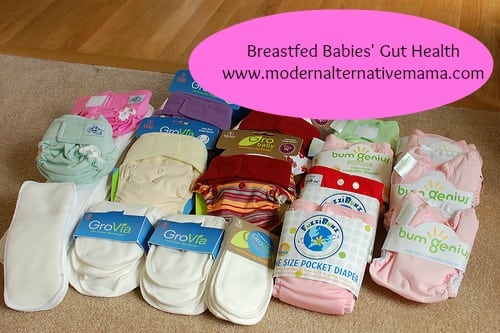 Wow, it’s February already!  I think the time has really gone fast!  Then again I feel like I am busy all the time with something.  I’m working hard to prepare for baby and I only have a few more weeks before I get too big and tired to do much (I’m 35 weeks now).  I barely have enough hours in the day just to do all my projects!  If you haven’t seen my plan, I’m stocking the freezer and pantry ahead of time so that things are easy once baby arrives.

Today’s reader question comes from an anonymous reader.  I chose it because it deals with gut health in a breastfed baby — and we all could use a little more information on gut health!

My 4 month old is EBF and for the past 2 months has been having the smelliest gas! I know when strangers smell it they would never guess it’s the baby! He has a bowel movement about every 3-4 days, and for 24hrs after the bowel movement, his gas doesn’t smell, but after that, it starts smelling again. He doesn’t seem to be in pain, and it doesn’t seem to fluctuate with my diet. Any ideas what to do would be appreciated!

I noted this same thing happening in my third baby when he was exclusively breastfed.  He didn’t seem to be in pain and it didn’t seem to bother him — but the gas and the poop both smelled!  This is not typical in an exclusively breastfed baby.  The thing is, this is related to gut health — the bacteria in his gut wasn’t quite right, and it was because of my diet.  It took me a long time to pinpoint the problems, but eventually I did.  It was corn and soy (and I was only getting the tiniest amount of soy lecithin in chocolate — we really don’t eat soy!).  When I eliminated these foods, even in trace amounts, the problem cleared up.

So, my first suggestion is to look at your diet more closely.  It may be something unusual or which you’re only getting in small amounts, which is why it’s harder to notice.  It’s much more obvious if it’s “dairy” or “gluten” or something you consume in large amounts on a regular basis.  Look more carefully at corn, soy, and food additives.  It could even be something obscure, like pomegranates (my second baby seemed to be sensitive to these, and I only had a small amount of pomegranate juice added to a smoothie!).  It’s going to take some serious puzzling to figure it out, but I’ll bet there’s something.

The second thing is to increase your own probiotics.  It’s possible that your gut health isn’t optimal, so the flora you’ve passed to him isn’t, either.  Although it’s quite common for breastfed babies to go several days in between pooping, it actually isn’t normal.  Ideally, the breastmilk should be digested quickly and they should be pooping 2 – 3 times per day, or even after every meal.  It’s often said that “breastmilk is digested so completely that there’s nothing left,” but there’s no actual science to support this idea.  It’s more of one of those statements that sort of makes sense, and so it’s been passed around as truth with no evidence.  Upping your probiotics will help your gut health, as well as his.  You may also offer him an infant probiotic — Klaire Labs makes one with a high potency that is powdered (not capsules) and allergy-free.

Hopefully this helps to clear up the problem!  Gut health is so important yet often misunderstood.  Stinky gas in anyone is a sign of having eaten something that doesn’t agree with you and/or issues with gut flora.  Probiotics as well as discovering the culprit are great places to start!

This month’s Featured Book actually isn’t ready yet.  It’s Real Food Basics (which is my very first book), but the brand-new Second Edition debuts on Monday!  If you purchased the book before, you’ll automatically receive the updated version for FREE.  If you haven’t yet purchased it, it will be just $5 all month long!  And we just may be having a little party on Monday with some even more special deals, so come back to see that!

Real Food Basics is the perfect book for anyone who is brand new to real food.  If you’re confused about grains, fats, traditional kitchen tools and techniques and more — Real Food Basics explains it all in a simple way.  Plus, the book contains 32 delicious recipes (including 5 brand new ones for the second edition) — and they’re recipes that everyone can enjoy, like cheese sauce, chicken chili, chicken cutlets, pizza dough, fries, and more!  These aren’t “weird” real food recipes that will leave your family saying “We’re not trying that.”  They’re real food versions of old favorites, a great way to “ease in” real food newbies!

This month’s main series is on love and relationships.  I’m sure you can guess why — in honor of Valentine’s Day!  You’ll also be seeing lots of neat Valentine’s crafts and healthy treats.

Finally, we’re doing a part-time series over the next three months about Welcoming a New Baby.  Don’t worry — most of what we post across the network will be relevant to all different family situations.  We’ll be looking at how to keep up with organization and homeschooling during busy seasons, freezer cooking, quick meal and snack ideas, home remedies, and so on.  The majority of the specifically pregnancy-and-baby related topics will be happening over on Modern Alternative Pregnancy.

Have you ever had trouble gut health?