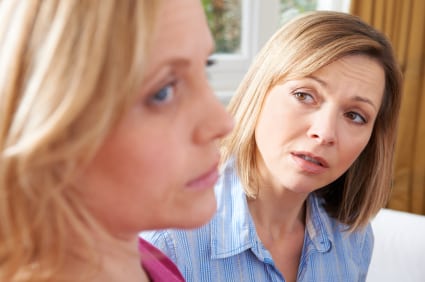 When Birth Doesn’t Go According to Plan {Defining Ideal Birth} Hearing the embarrassment in her voice broke my heart as I received the call announcing her baby’s arrival. What was supposed to be a moment of joy and excitement, turned into a moment of negative self-assessment and shame.

Where have we come as women, when the most natural part of our identities–and dare I say, the most sacred part of who we are–has become a competition: a standard we must meet, or we’re not deemed worthy enough to be part of the club? And this woman, who longed to be part of that club, now felt she would never achieve membership.

Her words hit hard, and I immediately wondered if I was one of those people who had contributed to her thinking that there was only one ideal way of giving birth.

Have natural birth advocacy groups gone to extremes of avoiding interventions, that instead of empowering women, they’ve unintentionally become just as guilty as the surgeon who tells them interventions are an absolute necessity to give birth?

I quickly reassured this dear mama that she’d used her “tools,” as she saw fit. She took control of her birth and made a decision based on what she felt was best. She did her research, read every recommended book, used a low-intervention OB, and was determined to have a drug-free birth, but she found herself in the middle of a long labor, was emotionally stressed, and was physically exhausted. An epidural helped her regain her strength.

After asking a few other women, I learned that many share her feelings. “I do feel there are ‘two birth camps,’ and never the twain shall meet- the ‘trust your doctor, get all interventions possible or you are damaging your baby,’ and the ‘do not trust the medical establishment, if you don’t birth at home, you are damaging your baby.’ When I finally considered an epidural, after a long, eventually augmented labor, one of the things that went through my head is that I’d be embarrassed to admit that in this [natural birth] group. Now, I know that is silly, and I know it was the right decision, but at the time, in the ‘weird thinking labor state,’ it concerned me because so many people here are totally anti-epidural.”

“I feel like an outsider because I am not in the home birth club. I do a lot of ‘crunchy’ mama things, but I choose to birth my kids differently. It’s taken me a while to come to terms with that, but I’m coming around. There are two sides to every coin. With my first baby, I had planned an all-natural birth with a midwife but things went terribly wrong. I had to reconcile with myself on how wrong that birth went, and it was really hard on me. The trauma of that birth basically took away my ability to hope for another natural birth. I gave up the fantasy, because the prospect of not obtaining that fantasy potentially took away from the experience [of future births].”

“When I had my last baby, I opted for a low-dose epidural. I’d already experienced drug-free births, but felt I needed help getting through the contractions. Getting the epidural enabled me to relax, rest, and even renewed my excitement of meeting my new baby. After all of the interventions with my first baby, I felt I’d been lied to by the medical establishment. This time, I felt I’d been fed just as much propaganda from the natural birth side.”

“After exhausting every natural remedy for my extreme morning sickness, I finally agreed to take a prescription medicine. While it got me back on my feet, I felt as though I should’ve been tougher, because other women dealt with their own morning sickness without using scripts.”

Back to the original woman who inspired this post. She later told me that it wasn’t the “tool” that made her feel guilty — it was the group of women who had told her horror stories–stories of epidurals resulting in c-sections, episiotomies, drugged babies, drugged mamas, babies not breastfeeding successfully, etc. While there’s an increased risk that comes along with interventions, she didn’t experience any of the above. It wasn’t the intervention which caused her shame, it was all the voices of the women painting a picture of what defines an “ideal birth.” And she felt she’d missed the mark.

I believe that an ideal birth is one in which a woman’s choices and desires are honored and respected. Give a birthing woman informed consent–provide information and allow her to make her own decision as the strong, intelligent, and capable woman that she is.

After all, it is her birth.

But who am I to offer such a statement? “Having a birth plan means that you have evaluated options and made your preferences known to your healthcare provider, and hopefully can work together to see those preferences achieved. Having a birth plan does not mean that you can always control every circumstance surrounding your birth. While it is important to have a goal in mind, you also have to make decisions based on how your birth unfolds. In some instances, the unfolding happens due to medical interventions (planned or unplanned), when given more knowledge, support, etc., you would have done something differently. Seeing this as part of the whole learning experience of birth is important, so that you don’t get ‘stuck’ in the past place. Other times, things unfold ‘just because,’ and looking back, it just was what it was. Being able to embrace either type of situation as part of ‘her birth story’ is what makes a woman able to learn, sometimes mourn/sometimes rejoice, but always grow to be a better woman, wife, and mother.”

From Genet, a BirthNetwork chapter leader and childbirth educator in training:

“If we truly care about women and not some ‘birth ideal’ that makes us feel important or superior, we should always seek to empower women with information, encouragement, and confidence so that they not only have the information, but also the faith in themselves, that they need to make their own best decisions.

If a mother decides ahead of time not to have an intervention unless it becomes necessary, I want her to have the faith in herself to follow through when things get hard, by saying or asking her support team to remind her, ‘I know why I’m doing this, and I can do this.’  But this is where birth advocates, usually unintentionally, can create a ‘pass/fail’ mentality, because we don’t make it clear that realizing ‘I need to do something different’ is also part of the birth process.  For many women, that something different can be getting on hands and knees instead of sitting on a birth ball, or cold packs instead of hot packs, or vice-versa, etc.  For others, it is getting an epidural and some rest instead of enduring several more hours of back labor.  Penny Simkin emphasizes that pain in birth is normal, but that women should never suffer, physically or emotionally, in birth. I would emphasize that only the woman in labor can ultimately make that call for herself, and none of us have any place to judge her.

So for the women I serve, I want their faith and confidence in themselves to go both ways: whether a woman makes the informed decision to have, or not to have, an intervention, I want her to have the confidence to judge neither herself, nor others who made a different decision.  I also want her to feel secure enough to acknowledge that every birth is different, that part of being human and especially of being a mother is to learn new things and set new priorities, so that she can make different decisions for a subsequent birth with no need to judge herself for prior choices or circumstances.  And if she is treated badly for her decisions—either in labor or afterward—I want her to know that it is the insecurity of those who judge her, and not her own choices, that are the problem.”

While birth is unpredictable, you can always feel good about your decisions if they came from a place of knowledge and confidence, rather than a place of fear and ignorance. If you chose a c-section because deep down in your gut you KNEW that it was the right choice for you, then you succeeded. Conversely, if you let others push you around and make decisions for you that deep down you felt uneasy about, or if you just plain weren’t prepared to make hard decisions because you didn’t take the time to think about things and educate yourself beforehand, you will probably regret that for the rest of your life. A Final Note of Encouragement

If you’ve given birth and things didn’t go according to plan or if you chose to use interventions during your birth or pregnancy, because you knew your body needed assistance, I want you to know that you’re just as amazing as any other mama who has birthed her baby without interventions or pain medicines!

I’ve talked to women who have suffered depression for years, because they felt shame from their birth experience. I’ve even heard women say they felt as though they had their doctor’s, doula’s, or midwife’s ideal birth, and not their own. If you’re one of these women, don’t be afraid to speak to a friend or even to another childbirth professional to gain a different perspective.

How about you? Did you struggle with a past birth experience? How did you find healing?