Are Children At Risk of ASD if Mom Gets the Flu? |
AD 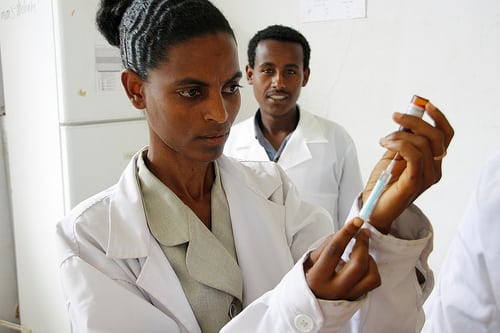 Are Children At Risk of ASD if Mom Gets the Flu?

A new “study” has come out, and believe me, I use the term very loosely.  But since it’s being discussed in the mainstream media and may have some pregnant women worried, I thought we should discuss it.

This “study” shows that pregnant women who have the flu during pregnancy have twice the risk of having a child with an autism spectrum disorder as those who don’t have the flu.  Of course, all the authorities are pushing women to get the flu vaccine to “protect” themselves from this fate.  However, even the study authors have admitted the study’s (many) limitations.  It has so many limitations that no protocol should be based upon it and no woman should worry about it.  Let’s take a closer look….

Is the Flu Really Damaging Children?

The study authors assume that there is something in the natural infection — not the treatment, but the infection itself — that causes the increased risk of ASD.  They have no basis for making such an assumption.

Pregnant women are often told that high temperatures are dangerous.  That is why pregnant women are encouraged not to use saunas or hot tubs or even take very hot baths.  They are also told to be very cautious about fevers, because fevers could cause brain damage.

I have found no compelling medical research to support this assertion.

There is some evidence that a high fever during weeks 4 – 6 of pregnancy may increase the risk of neural tube defects.  However, the neural tube closes by the end of week 6, so after this point, this is no longer a risk.  (And neither is B vitamin deficiency, which also plays a role in neural tube defects.)  All other research into birth defects and increased body temperature is contradictory, not conclusive.  It is probably better to avoid artificially raising your body temperature (via hot tubs, for example), but a brief and mild fever should not be cause for a concern.

That’s not what the researchers are blaming for this phenomenon, though.  They don’t actually have any reasons why.  They’ve suggested it might be something the flu virus itself, because colds, UTIs, and herpes infections in pregnancy showed no increase in ASD risk.

Maybe the way the study is being reported, it looks scary.  But it’s not.  There are several giant holes in it.  Let’s discuss!

When it comes right down to it, the entire study is useless.  There is a potential link between flu and ASD but there are too many variables and unanswered questions to actually draw any conclusions or make any decisions based upon it.

Then Why Write It?

Researchers are constantly looking for the cause of autism, but mostly in the wrong places.  They want to look at genetic and uncontrollable factors.  They do not want to honestly examine the role that modern technology could play.  Anything that is not a biological norm needs to be cautiously used and thoroughly examined, rather than assumed to be innocent and beneficial.

The real reason they reported this study, however, was to try to scare women into getting a flu shot.

These shoddily-done studies and extensive conclusions are irresponsible science.

How to Protect Yourself

The bottom line is, we don’t know if the flu, or any aspect of flu treatment, is actually linked to ASD or not.  We do know getting the flu during pregnancy (or any other time) is no fun.

Instead of getting a flu shot, try this:

These are all beneficial in pregnancy as well as in helping to ward off illness.  They are very safe!  If you do get sick, all of the above plus ginger tea are excellent.  I have used ginger tea for colds and it knocks out a sore throat, at least temporarily.  It’s also safe for all ages.

What do you think about this new “study?”  Are you worried?