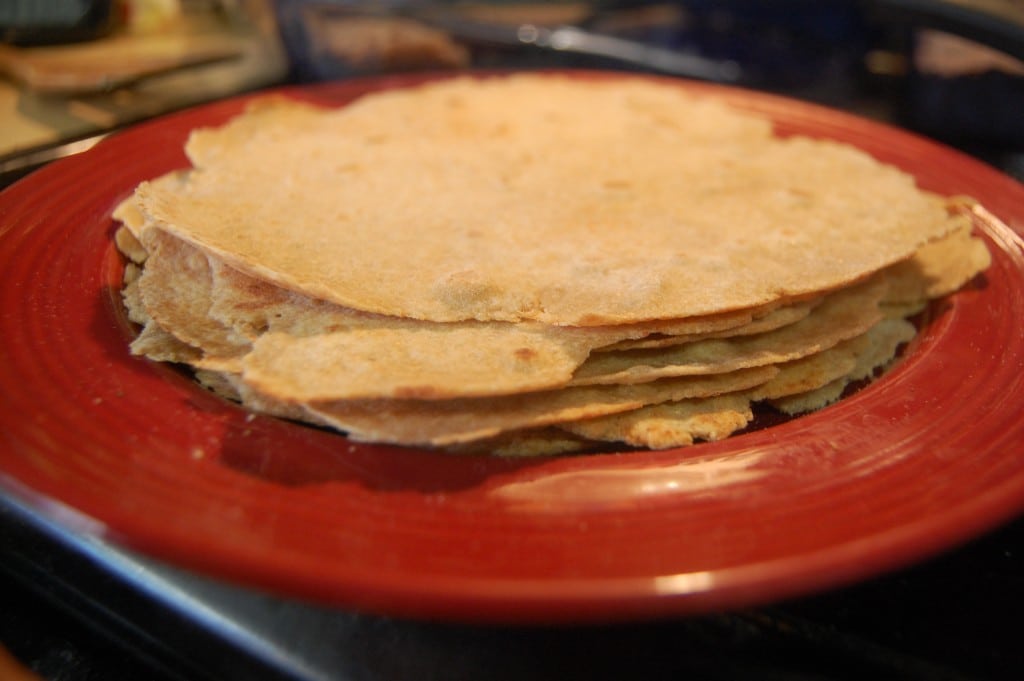 I have tried lots of recipes for soaked and sprouted tortillas.  And, to be honest, white flour tortillas too.  Only the white flour ones consistently came out “edible” (meaning, that I really wanted to eat them) but really none were great.  Store-bought “decent” tortillas still contain white flour and sunflower oil, which is better than hydrogenated junk, but still.  I didn’t love compromising, and I couldn’t do it too often (and I love meals with tortillas!).  Plus they are expensive…$3 for 10 – 12?  That’s not especially frugal, especially for a compromise.

There had to be a better way.

Awhile ago when I was soaking some dough for some other experiments (including my coconut chocolate chunk cookie bars, which were a hit), I had a little leftover and decided to soak a trial batch of tortillas.  I really wanted some. When I mixed in the rest of the ingredients and rolled them out the next day, I quickly realized what I’d done wrong before.  And also realized, after cooking the first couple, how awesome these were!

I was so pleased with the trial batch (which only made 6) that I immediately made up a big batch to cook the next day.  I was determined to have my tortillas for easy lunches in the next couple of weeks! And since I announced all this on Facebook and some of you were curious, I took pictures of the process so I could share. 🙂 Add your flour to a large glass bowl. Melt your coconut oil, if needed, over low heat.  Add the coconut oil to the flour. Stir it all together until a stiff dough forms and all the flour is mixed in.  This takes a bit of time since the dough is really stiff.  You want it that way. Cover it and let it sit in a warm place overnight.

The next day, sprinkle the salt and baking powder over the dough. Use your hands to knead it in — it’s way too stiff for a spoon to work for this part.  This should take a couple of minutes. Lightly flour a surface (I just use white unbleached for this part) and roll the dough out.  Get a 10″ frying pan and turn it on medium-high heat. It needs to be super thin.  Like, you pick it up and you can practically see through it.  So thin that you can’t measure how thick it really is. This is critical.  I kept making them too thick before, and they’d become crispy on the outside and stiff because of their thickness and they just didn’t have the flavor or texture I was looking for.  The kids wouldn’t eat them.  So keep rolling them very thin!  If the dough were not as stiff as it is, it would not be possible to roll them so thinly without them falling apart.  That is why that is so important.

Once the tortilla is sufficiently thin (and this will take some muscle), transfer it to a hot frying pan.  Allow it to cook for a couple minutes per side, until bubbles appear. Flip it and cook the other side.  You want the pan to be pretty hot and it’s better if they cook faster rather than slower — they’re less likely to get crispy or tough. When it’s done, remove it and set it on a plate.  If you like, wrap them in a towel to keep them warm.  I didn’t bother since I was planning to freeze for later use.  Repeat the rolling and cooking process for the rest of the small balls.

These will stay nice and soft and will make good wraps, burritos, quesadillas, and all kinds of other awesomeness.  Makes about 18 8″ tortillas.

What’s your favorite way to use tortillas?