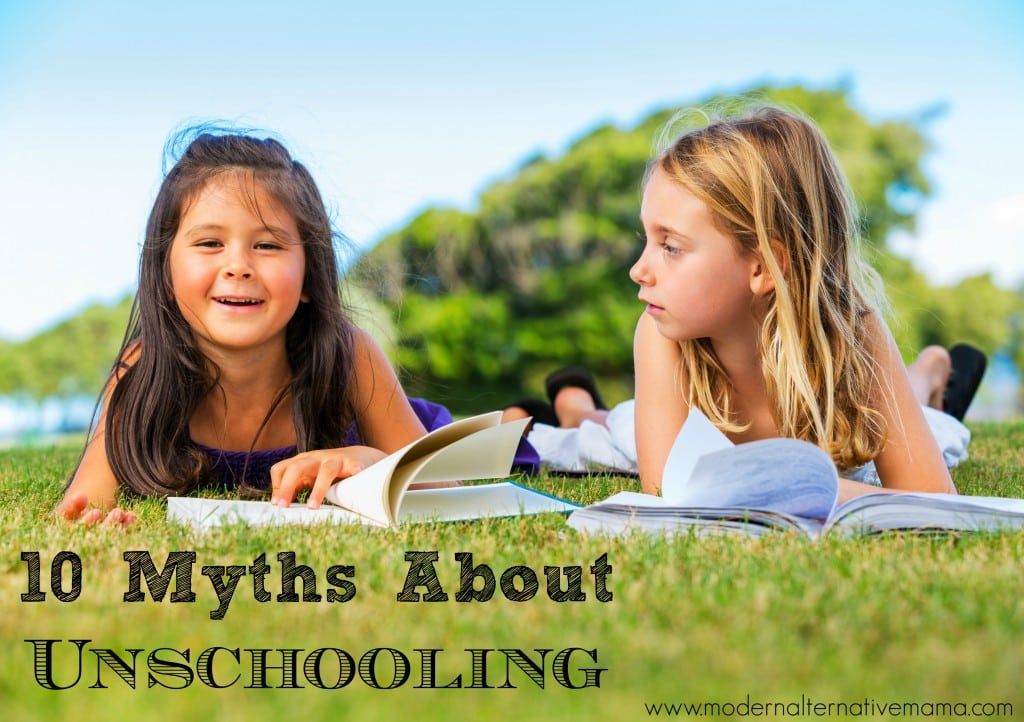 We’ve been discussing unschooling around here since the blog began three years ago.  At that time it was largely theoretical (since my oldest was not yet 2), but now we’re into it.  She’s nearly 5 and we’re doing “kindergarten,” as it were, this year.  I’ve blogged about what that looks like in our home, as well as our “lesson plans.”

Still, myths about unschooling abound, and nearly every time I post on it, I hear some of them.  To be honest, a few of them really irritate me (sorry, I’m human).  I know the majority are born out of simple naivety — I didn’t know what unschooling was much more than three years ago, either.  Most people have never heard of it and so don’t really understand what it means.  I’m hoping I can clear up a few myths about unschooling.  It’s really so hard sometimes for those on the “outside” (i.e. not doing it, not right for their family) to really understand because it is so individual by family.  Still, there are some core, very basic/broad truths about unschooling.  Let’s dive in.

Truth: No.  Well, sort of.  Most people who say this mean that unschoolers never engage in any formal study, they just ‘learn by living’ through normal activities (eating, shopping, cooking) and so therefore, they will be unprepared and not knowledgeable about academic subjects.

However, although this is probably true for young students (preschool to early elementary), it does not ‘stay’ true.  Plus, unschooling isn’t just about “whatever happens” in everyday life.  Unschooling parents very carefully bring their children different books, materials, videos, field trips, and so on.  They plan and as their children get older, help their children plan.  They visit libraries and museums and read a lot.

They “study” life in myriad ways, not just “live” it.  They work hard to learn deliberately…just in a very different way than traditionally-schooled children do.

Myth #2: Unschooled kids never learn to separate from their parents

Truth: All children learn to separate when they are ready to do so, and the age at which that occurs varies.

In our society, we like to push them towards independence, just as fast and as soon as we can.  We put them in their own rooms from birth, pass them off to babysitters (even if only for the occasional night out) from a few months old, we let them cry themselves to sleep, we force them into preschool even if they cry.  We do these things not for *our* occasional sanity (who doesn’t need a night off sometimes?) but because we believe it is ‘good’ for the child.

There is no child who has a range of options, activities, and relationships who will grow up and be afraid to leave his/her parents, if they are loved and cared for.  And even if the child remains very close to his/her parents throughout life, isn’t that a benefit?  It would certainly make the teen years easier….

We just need to change the way we think about ‘independence,’ when it should come, and to what extent it is really necessary.  (But the image of an older child or teen who is too frightened to go to a friend’s house and hides behind his/her parents is just false.)

Truth: This one always makes me laugh now.

“Socialized” — what does it mean?  Really, it means getting along with others.  Unschooled children are frequently on the go.  They participate in art classes, sports teams, homeschooling groups, church groups, scouting, and so on.  They go to museums, the grocery store, the library, etc.  They’re constantly out in public.  They’re constantly meeting people of all ages, races, genders, ethnic backgrounds, and so on.  They have to learn to get along with all of these different people.

They have to learn how to ask for help finding a book in a library, or chat with the cashier at the grocery store.  They have to learn to deal with teammates and friends in classes and groups.  Believe me — they’re well socialized!  (They just don’t spend 7 hours a day in a homogenous classroom with the same 30 kids, and some people dislike that.)

Truth: As unschoolers get older, they choose their own paths in life.  They can begin apprenticeships, internships, or even college courses at age 14 – 16.  Once they find areas of strong interest (for some kids, this happens around ages 7 – 10, once they are capable of abstract/higher order thinking), they can begin to study those intensely.  This prepares them for college, should they choose to go.  (And studies show homeschoolers in general are highly successful in higher education.)

But remember, kids don’t *have* to go to college to be successful.  And with unschooling, a child who knows that college isn’t for him/her can pursue other educational or training opportunities at a younger age and be starting a job/career by age 18, instead of just starting to search.

Myth #5: Unschooled kids never use any sort of books or curriculum

Truth: Of course unschooled kids use books!  They are an excellent tool.  They just choose whichever ones work best for them. 🙂

And as for curriculum, it’s true that most younger kids do not use one, and certainly do not rely on it.  While other types of homeschoolers generally plan around a curriculum they’ve carefully selected (using some additional materials), unschoolers do not follow a curriculum or any form of plan laid out by someone else.  Instead they make use of a bunch of different materials that work for them.

However, as unschoolers get older and show a strong interest in a particular field of study, they may choose their own curriculum materials — including an actual, formal curriculum if it makes sense to them.  Some families also choose to unschool for most subjects, but use a curriculum for math or reading.  Some kids, even at a young age, ask for workbooks!  It’s all dependent on what works for the individual child and family.  We can’t say, though, that unschooled kids “never” use curriculum because that isn’t true. Truth: This is also pretty silly. 🙂

First, it’s not exactly a major educational goal of mine for my children to learn to stand in line or think as part of a group.  I’d really rather they didn’t spend a whole lot time learning those things, actually, especially at a younger age.  It’s more important, in my opinion, for children to learn to think and behave independently before becoming part of a group, so that they are (hopefully) less vulnerable to peer pressure.

But, unschooled children still do learn to stand in line, wait their turn, and follow other “group rules.”  Remember, they participate in scouting, sports teams, music lessons, and so on.  There are group rules in each of these settings, which the children must follow.  They will grow up knowing they can choose or not choose to participate in any particular group, but that if they choose to do it, they are bound by the rules of that group.

Also, anyone who’s ever been to a bank or a grocery store or the DMV knows you have to stand in line and wait your turn sometimes.  Or even at a play date!  There are so many real-life ways for children to learn these skills; they do not need to go to formal schooling for it.

Truth: “Major childhood experiences” are in the eye of the beholder.

Some would argue the ritual of public schooling is critical.  Others would argue that eating at McDonald’s or consuming Kool-aid in the summer is important.  Really, these things are important parts of their memories, and so they believe everyone should feel the same.  But of course, that isn’t true.  Children can make memories in whatever they do.  All children really “require” is parents who love them and are present with them through their life.

Whether their memories are of catching fireflies in the summer or sledding with Dad in the winter or Saturday used-bookstore excursions (or even going to the salon for beauty treatments with mom), what does it matter?  Everyone’s experiences are different and there’s nothing wrong with that.  Children who do not have loving parents, who are abused or neglected — those children are missing out.  Children whose loving parents provide them with an eclectic and non-traditional upbringing are not.  They simply have different memories to cherish.

Myth #8: Unschooled kids never really learn anything, and their parents decided to unschool because they are lazy

Truth: This is so silly.  Of course they do.

They count and sort objects when they’re helping mom at age 3, and ask a million questions at age 4, visit all those museums and read all those books….  Unschoolers are constantly doing something!  (I never, ever, ever hear “I’m bored.”)

And the parents?  They choose to unschool because they believe it’s best for their family.  Good unschooling parents are constantly looking for new books, new movies, new activities, new crafts, new ideas, etc. to expose their children to.  They’re constantly trying to hunt up items or experts to help their children learn.  Unschooling parents have to be very involved in order to be successful!

Myth #9: Unschooled kids might just play video games all day and nothing else

Truth: There may be brief periods of time in which this is true.  Sometimes kids go through an “I-hate-school” phase, and with unschooling, it’s a bit easier to just take a break for a couple of weeks and then start fresh, rather than pushing the issue and making it a bigger problem.  But if this happens, it’s very temporary.  It isn’t a lifestyle.

If a child is struggling to find his/her interests and talents, then the parent needs to seek out new experiences and help the child figure out where to start and what to do.  They don’t just ignore the child and allow them to mess around all day long!

(Besides, this “I hate learning” thing is often unique to kids in the public schools, where they have to try to fit into a one-size-fits-all mold that they don’t fit into.  They eventually decide the problem is learning in general and just stop trying.  Kids who have always been unschooled often do not have this problem, because their education has always been tailored to their pace and needs.)

Truth: What is “real life,” anyway?  If we believe it is going to public school, going to college, fitting in and being the same as everyone else…no, unschooling isn’t compatible with that.  But “real life” is so dependent on what each individual person wants to do!

Unschooling can easily prepare children for whatever life they want to have.  Besides, unschooling occurs in a real-world setting — kids are out and about among all different people and situations.  They’re having to be self-motivated in order to learn, because they don’t get grades and gold stars like public school children do.  As adults they won’t get gold stars.  They will get raises or promotions in their jobs, but they’ll also get fired for a lack of motivation or poor work!  Learning early on to simply be self-motivated is a huge plus in the “real world.”

Unschooling isn’t quite like most people think.  And of course it isn’t for every family.  For those it’s right for, it’s awesome, and definitely a valid approach to education.

What myths have you heard about unschooling?