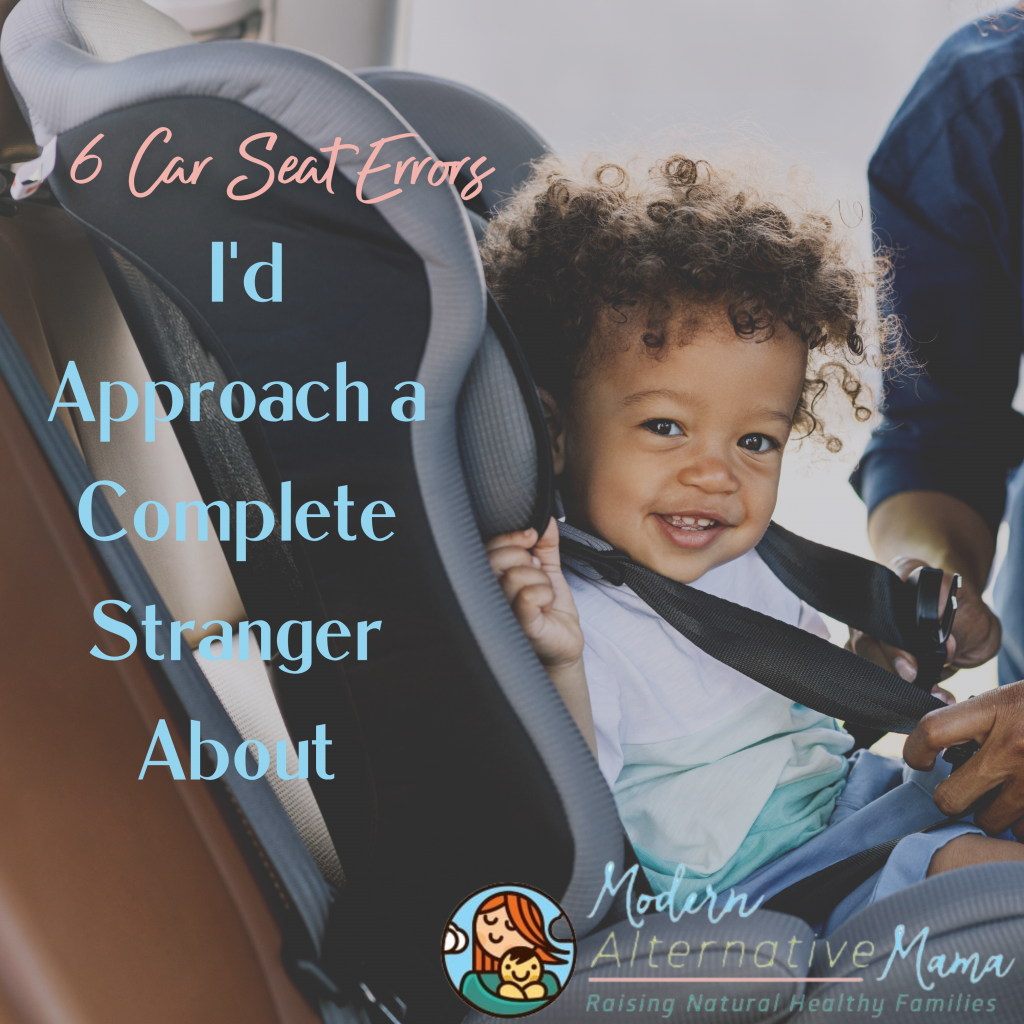 [Author’s note:  All the pictures below show car seat misuse.  Please do not use your car seats in any of the ways pictured!]

I was certified as a Child Passenger Safety Technician (CPST) in February 2000, and the little wallet card I received after completing my class felt like a license to attack (in a nice, helpful way, of course).  I would walk up to complete strangers in the Wal-Mart parking lot to let them know their straps shouldn’t be twisted, their chest clip was too low or their toddler could still be rear-facing.  Once in a blue moon, I would get a polite (though rather tight) smiles or a thank you, but more often I got (on a good day) ignored, and (on a not-so-good day) told off.

It took me a while to realize this, but many people see their car seat use as a PARENTING CHOICE, not a black-and-white, right versus wrong issue.  Unsolicited opinions tend to be kindly tolerated (but ultimately unheeded) by the nice people, and strongly condemned by the less patient.  Most people believe that as long as they’re within their state’s law, they’re doing everything necessary, and for you to stick your nose in is a blatant attack on their right to parent as they see fit.

I learned this the hard way.  Less than a year into my CPS career, I crossed a line.  I pulled into a parking lot just in time to watch a woman buckle a rear-facing infant into the front seat of her vehicle – a vehicle with an active passenger-side air bag.  It had been almost a year of ‘accosting’ people about their car seat use – and almost a year of receiving all manner of rejections – so I was doing my best to be polite and non-confrontational in my approach to her.

I did ask, right up front, if she had the airbag turned off for the passenger seat.  No, she told me, she didn’t.  I tried to be nice about it, but I was very clear that by putting the infant in that place in the vehicle could be fatal.  She brushed me off, telling me that she needed to be able to tend to the baby while she drove.  I didn’t even address the danger of trying to care for an infant while driving.  I pointed out the warnings on her visor, and told her again, that driving with the baby there was VERY dangerous – even if she simply rear-ended someone, that “minor crash” would seriously injure, if not kill the baby.  At that point she just got rude, and told me to get lost (not in those words).

Long story short, I chose to involve the local police instead of letting it go, she spent the night in jail, and it was only through very supportive, very persuasive friends in the local police department and the grace of God that I was able to narrowly avoid a lawsuit.

I’ve thought about that day often in the past 10 years, and several people have asked me “If you had it to do over again, would you push the issue as strongly, or would you just let it go?”  Though I can’t say for sure, having never been caught in that situation again, my guess is that I wouldn’t be able to walk away from a similar situation without saying something.  However, I have definitely become choosier about the car seat errors I would approach a total stranger about.  While a correctly-used car seat is the one that is going to best protect a child in a crash, there are errors that are deadly, and errors that are not.  Here are the deadly errors I won’t walk away without addressing:

1. A rear-facing only seat installed forward-facing.

Some people call these “infant seats” or “buckets”, but no matter what the name, a seat that is designed to be used rear-facing cannot protect a child when it is used forward-facing.  In fact, in most cases, it won’t even remain in the vehicle’s seat belt.  Using it this way could be fatal, even in a minor collision.

2. A rear-facing car seat installed in front of an active air bag.

3. A harnessed seat not buckled (or LATCHed) in.  In my neck of the woods, a seat that is not secured to the vehicle usually falls into one of two categories – either the seat is being used by a non-English-speaking family that doesn’t understand the basics of how car seats work, or the seat is in a vehicle where another passenger has accidentally unbuckled it and the parents are not aware of it.  Either way, this error can spell disaster.  Unfortunately, fixing an accidentally-unbuckled seat is much easier than trying to communicate with a family that doesn’t speak English, but thankfully my hand gestures and smiles are getting better! Both the National Highway Traffic Safety Administration (NHTSA) and the American Academy of Pediatrics (AAP) have recently updated their safety recommendations to keep children rear-facing longer.  The official AAP recommendation is to keep kids rear-facing to a minimum of 2 years and 30 lbs.  NHTSA’s official recommendation is that children should remain rear-facing to the limits of their seats.  Now, I don’t go around accosting every parent with their 23-month-old kid in a forward-facing seat.  But if I see an obviously young baby (clearly under a year), I do say something.  Rear-facing is always safer, but for those tiny babies, it should be non-negotiable!

5. Only the chest-clip is buckled.  I’ve come across this error a few times just this year.  Some parents mistakenly believe that the chest clip does the same thing that the buckle does, and will use one or the other, instead of both.  However, the chest clip is not designed to restrain a child in a crash.  In fact, most chest clips are designed to pop open or slide down with the force of a crash.  The chest clip is merely a pre-crash positioning device, designed to keep the harness straps on the shoulders so they’re in the right place before a crash happens.

6. Using the wrong seat altogether. This one is a little less specific, and definitely varies by what I see; But, for instance, if I see someone using a harnessed car seat as a booster seat, I’ll say something. Same thing if they’re using the infant-only seat for their 4-year-old, a booster for a child who still sleeps in the car, a car seat with the straps in the wrong place on the child, or using a seat that’s missing parts or put together wrong.

Those are all things I’d speak up about, though these days I go about it much differently.  I carry a business card and I only offer help, not criticism.  I point out exactly what I’ve noticed, and give a simple explanation of how it can be fixed, then hand over my card with the offer “I can help you out now, if you have a few minutes; if not, here’s my card.  Give me a call and we can get that fixed as soon as possible.”

As for the rest, sometimes I’ll leave my card on a windshield if I noticed a car seat with errors inside the vehicle.  Otherwise, I leave the situation alone.  In nearly 12 years of working as a CPS technician, I’ve learned that those who want or will accept help tend to be the ones who go out of their way to look for it.  The rest…I have to leave in God’s hands.

How do you feel about car seat issues?  Is it a parenting decision, or a black-and-white issue with no room for error?  I’d love to hear your thoughts!

Jennifer Matlock started writing before she actually knew how, pestering friends and family members to write down the stories she wanted to tell and ideas she wanted to document.  She’s been doing it on her own for over 30 years now, and currently writes about life, marriage, parenting, Christianity, homeschooling, Real Food, politics, having a temper tantrum in Target and more at Love Will Be Our Home.  Jennifer married Andrew in 1995, and is a full-time stay-at-home(schooling)-mom to Ryan (14), Aaron (11), Kaitlyn (7) and Megan (5).