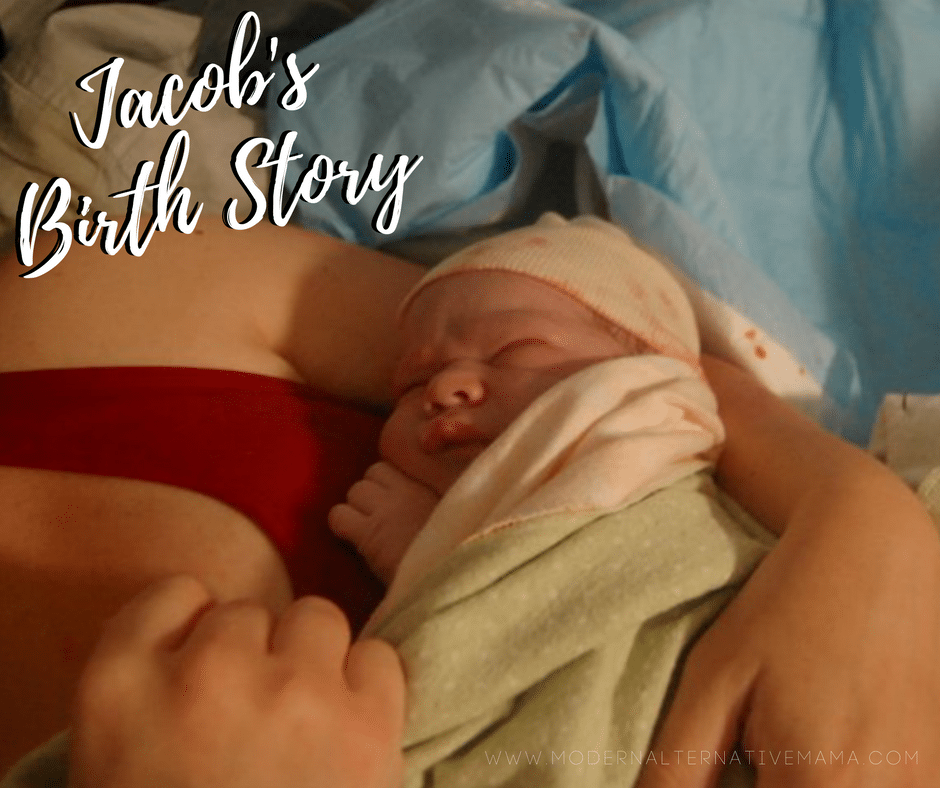 This will be the final entry in my “pregnancy journal!”  Although I realized that somehow pregnancy brain got to me and I didn’t cover a lot of important issues, like why I didn’t take prenatal vitamins, or why we aren’t circumcising our sons, or…I’m sure there’s more!  If you have any questions, please feel free to ask and I’ll try to get to some of them over the next few months.  It’s been a long journey to get here, through a very difficult phase of life, but I feel so blessed to have Jacob and I know that whatever happened, it was worth it to have him. 🙂

This story kind of starts almost a month ago.  I started having random contractions around 36 weeks.  My goal was to “hold on” until at least 37…and then hopefully as long after that as possible!  I definitely didn’t think, initially, that I’d carry to my due date…and I was completely convinced that I’d never have the baby ON my due date…only before or after!

But then nothing was happening, every day I’d have some “signs” or be tired or something but I recognized it wasn’t going anywhere.  It wasn’t time yet.

Then it was Wednesday.  I was feeling very impatient then, and the kids were BAD all day (sorry to my friend Nicole…they kind of took it out on your kids!).  They just cried, whined, fussed, and raced around doing anything they knew they weren’t supposed to!  I felt, by late that night, that I wouldn’t be pregnant much longer.  I was sure labor was only a day or two away.

Thursday I spent the day doing crazy things!  I felt much more patient (and the kids were much better too).  I spent 3 hours on my feet, making soaked pitas.  Then I ran off to Lynd’s and bought 90 lbs. of peaches and 25 lbs. of cucumbers…KNOWING I was likely to go into labor and not be able to do anything with them myself for a couple days.  This didn’t seem to matter…I had to buy it all!

I was exhausted when I got home.  I was feeling very emotional and sore and knew labor was coming soon but I was still unsure how it was going to start.  I began timing contractions around 9 PM that were initially like Braxton-Hicks, but started to peak more and cause some pain, not just tightness.  They were very irregular, going from 6 – 12 minutes apart and occasionally stopping.  I wasn’t completely sure “this was it” but I knew that it was coming very, very soon.

I went to bed at 11 and slept very fitfully, waking several times to use the bathroom, having random contractions and cramping, feeling very emotional and “on edge.”  Finally around 3:30 a REAL, strong contraction hit — one strong and long enough to wake me up.  Then I knew it was starting and I couldn’t sleep anymore.  I wandered around, the contractions were still irregular, but growing stronger and longer.  I called the midwives just before 4 to tell them “this is happening” and they came about 4:30.

By this time I was already in the birthing tub, breathing through the contractions.  They were strong enough that I did need to focus and I wanted it quiet.  Any sound bothered me — people talking, clothes being moved, anything.  The hose had been flopping around and even had fallen out of the tub a few times when Ben was trying to fill it, even this bothered me.

I labored in the water pretty easily until close to 6.  It was getting harder, but I was focused and able to remain relaxed through the contractions.  It had been my goal to make sure that I simply focused and let it happen, rather than fighting it.  Which I was able to do!

Just before 6 things really were getting hard and I called Ben over to help.  He stood behind me and held me, and then I got on my hands and knees and Ben put counter pressure on my back through contractions.  I kept thinking, “Open, down, out” through every contraction while blowing so I could manage it.  Blowing seemed to help the contractions and the baby move down.  I kept reaching to feel his head.  Between contractions, I just kept thinking that I was focusing and things were progressing and it couldn’t be that much longer, especially once things were getting really intense.

Then I felt like I really needed to use the bathroom and I got up and out of the tub and went to the bathroom…everyone followed me.  They realized I was pushing then because the baby was so low and I was having trouble dealing with the intensity at that point.  The only way I could handle it was by trying to help the baby move down, get closer to birth!

They convinced me I did not want to stay sitting on the toilet because it wasn’t good for baby and tried having me sit on a chair.  I didn’t like that, it wasn’t comfortable.  They ran and got a birthing stool (which I never thought I would want!), and brought it up.  They put the chux on it but then thought towels would be better and grabbed some, but I was starting another contraction already and just wanted it done!  The chair behind the stool ended up being helpful, though, because Ben sat behind me and held me.

I sat down, and then things were really moving.  I probably wasn’t quite fully dilated, but the baby’s head was mostly beyond the cervix and was coming down fast.  (They never checked me in labor at all, except with the Doppler — but no internal exams.)  Suddenly I HAD to push.  My water broke, and then baby’s head came down and out fast.  About halfway through they told me to stop, slow down, blow instead of push.  I did, and his head was born soon after.

I remember with my other babies that once their heads were out the rest of their bodies just slid out.  Not this time!  The shoulders were really wide and I had to really push to get them out!  But of course, then his body did slip out and I was handed my baby.  He seemed so little — even though he’s really not — for a newborn!  I snuggled him for a minute with blankets on him, and then I checked to see what we had — a boy!

Once we moved to the bed, I was told that part of my cervix was sort of outside my body since things had gone so fast at the end.  I’m to lie down for a couple days to make sure things stay where they should be.  (Which, almost a week later…I’m healing nicely, so that’s good!)

I snuggled my new son.  It was 6:45 and Ben went and woke the kids up to come meet the baby.  Bekah was sleepy but then VERY excited.  Although she wanted a girl, she only asked once about why he is a boy, and has claimed him as “her” baby brother.  She won’t leave him alone!  She’s constantly holding him and is very protective and very excited.

Daniel’s not so thrilled.  He was very excited to see the baby and very curious to get close to him.  Only now he’s realized he doesn’t get to climb on or snuggle Mommy quite the way he wants to, or have me get up and take care of him.  He is at least happy that his grandparents are here to play with him!  I don’t think he loves not being the baby anymore though!

Once we weighed and measured him, we found out that Jacob weighed 8 lbs. 11 oz. (my others were both under 7.5 lbs!) and was 20.5″ long.  By far my biggest baby!  They also said his placenta was “perfect” and very healthy, and that he looked perfect.  His head was 36 cm and shoulders wider than that — pretty big baby!

Luckily I really didn’t tear, despite the big baby and fast birth (2 minutes pushing again).  I have a small tear along the scar from my first birth, but it really doesn’t hurt.  I haven’t even needed ice packs or anything, I’m just not really sore!  The afterpains are the worst, especially since Jacob seems to like nursing for 30 – 40 minutes straight every couple hours!  He was asleep for a couple hours after his exam, and then really awake and alert again for over an hour!  He liked snuggling and staring at Mommy. 🙂

Ultimately it was a short, very intense birth.  A long pre-labor and fast active labor, just as I predicted.  And now I have three beautiful children!