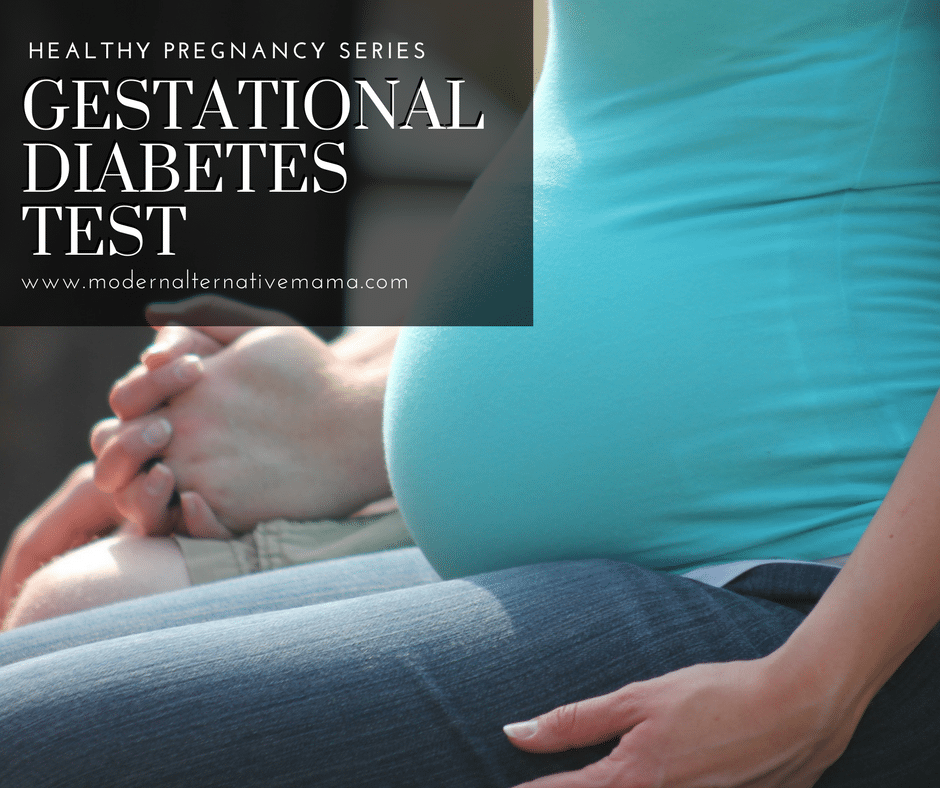 When you’re at the end of your second trimester or beginning of your third trimester, most practitioners like to do the gestational diabetes test.  (If you are showing symptoms, your doctor will do this earlier as needed.)  It is routine for all pregnant women, however, around 28 weeks, and many practitioners require it.

There are two different tests, and most women take the first kind.  The one-hour test doesn’t require fasting; you eat normally.  Then, one hour before you take the test, you’ll drink a 50-mL glucose solution.  Normally, you’ll have been given this at your last appointment so you can drink it at home.  When you arrive, they’ll ask you what time you finished drinking the solution so they can take your blood as close to one hour later as they can.  They’ll draw some blood and check out what your blood sugar is (they will probably also check for anemia).  If it is within a normal range, around 100, then you are fine.  If it is elevated, suggesting that you’re not metabolizing sugar well, then they will ask you to take the second test.

The three-hour test does require fasting, so it’s usually completed in the morning.  You won’t eat for 12 hours beforehand (or as your doctor instructs).  You’ll be given a 100-mL glucose solution to drink, and your blood sugar will be tested at 1, 2, and 3 hours after to see how you are metabolizing the sugar.  This test is more accurate than the first because it measures only the sugar they’ve given you (due to fasting) and over a longer period of time, to see how you’re really metabolizing it.

What Happens if I Fail?

Failing the first test isn’t too uncommon.  If you’ve eaten a carb-heavy meal during the day before you took the test, that might throw off the results.  It only means you need to take the second test to see what’s really going on.

Failing the second test means that you have gestational diabetes.  Your practitioner will recommend that you avoid all forms of sugar, and check your blood sugar a few times a day.  You will have to be very careful about what you eat during the rest of your pregnancy.

Women who have gestational diabetes are more likely to give birth to unusually large babies — 10 lbs. or more.  These babies are not meant to be this large; the excess sugar in your blood causes them to be heavier.

Do I Have to Take This Test?

According to many doctors…yes.  Some will even kick you out of the practice for refusing it.

However, ACOG came out a few years ago and stated that women who are under 25, have no family history, no personal history, and are otherwise low risk do not necessarily need this test.  Doctor practice has been slow to catch up, as is typical.  (They also recommend against routine ultrasound, but no doctor seems to know that, either.)

There are alternatives to the test, though, if you or your doctor feels you need it but you don’t want to take it the traditional way.

The glucose solution is full of artificial flavors and colors, which is one reason not to drink it.  Some doctors will allow you to drink an equal amount of grape or orange juice instead (having 50 mL of glucose is the important part).  Others will recommend a meal that contains 50g of carbs instead.  These are ways to take the “usual” test without drinking the glucose solution itself.

Others, often midwives, will recommend checking your blood sugar at home after meals for about a week.  If it is consistently normal, you don’t have gestational diabetes.  This is a “real world” test and even more accurate.  However, this requires a lot on your part — remembering to check and being willing to buy the supplies and prick your finger multiple times a day — so it is not preferred.

You can also choose to skip the test.  I did this in my second pregnancy (I was 24 and had no risk factors), and will do it this time too.  My midwives check my urine for sugar at each appointment and I have no detectable levels.  If I were, in fact, having issues, sugar would show up in my urine.

If you do these urine tests and glucose does show up, either a few times in a row (at low levels) or once at a higher level, it would be wise to take some version of the test.  Alternately, if you don’t feel well, are gaining weight quickly, etc. — take the test.

Normal women with no risk factors and no symptoms (the urine test is key) do not need to take it.

What Should My Diet Be?

If you are eating a traditional diet that is high in protein and fat and lower in carbs, you probably would not show as having gestational diabetes anyway.  The traditional diet for diabetics is a fairly high-carb diet.  The carbs are usually whole grains and are usually meted out carefully so as not to spike or drop blood sugar.

However, blood sugar remains more consistent when you eat proper protein and fat and only consume carbs in smaller amounts, and always properly-prepared whole grains.

Especially if you are at risk, or have had gestational diabetes in the past, it is important to eat a healthy pregnancy diet.

Have you ever had gestational diabetes?  Do you or will you take the test?