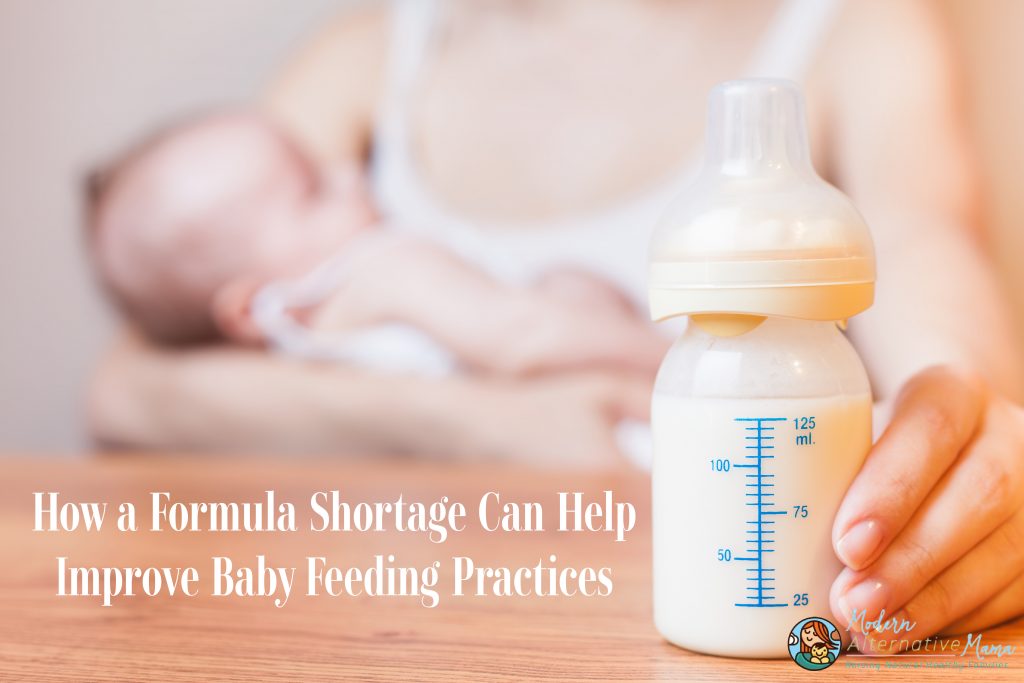 How a Formula Shortage Can Help Improve Baby Feeding Practices

Two years of supply shortages.  A major formula plant shut down due to suspected illnesses.  Draconian and unnecessary government regulations, preventing the import of formula from other countries.

An Abbott nutrition plant in Michigan shut down — a plant that produces up to 43% of the country’s formula supply.  Parents are scrambling to find the food their babies need, especially families whose babies require special formulas.  Formula is being rationed in stores across the country, in an attempt to preserve the limited supply for everyone, not just those who get there first.

This has led to a fight about “what now.”  How do we cope with a lack of formula?  Some are touting breastfeeding as the ultimate answer; others say it’s not that simple, and even insulting to families who are unable to breastfeed and struggling to feed their babies now.

The truth is…there’s an entire, overarching conversation to be had here.  So let’s have it.

I ask this not to blame mothers…but to truly dig into this topic.  Why are so many mothers needing formula in the first place?  84% of women initiate breastfeeding, but just 46% are still exclusively doing so by 3 months postpartum.  That means that over half of infants are getting at least some formula during their first year.

Although strides have been taken in hospitals to be more baby-friendly, including immediate breastfeeding initiation, rooming-in, on-staff lactation consultants, avoiding formula in the first 2 days of life unless the mother does not want to breastfeed or it is medically necessary, there is more work to be done.

Formula companies routinely send samples to mothers who have registered at any baby store, indicating that they are expecting.  Some hospitals still send moms home with formula gift bags, including samples and coupons.  Worse, some formula companies write articles about the “importance of breastfeeding,” but give advice that undermines breastfeeding success (like “keep a can of formula on hand ‘just in case'”).

While formula should be available for moms who need it, it should not be pushed on mothers so readily.

Again, there has been an increase in support available.  Many hospitals have lactation consultants on staff, and more insurance companies are covering lactation visits and breast pumps.

However, not every mom has access to a lactation consultant.  There may not be one in her area, or it may not be affordable, or the available consultants may be booked up.  If breastfeeding is painful or baby is not latching well, it’s important to be seen quickly to avoid ongoing problems developing and to ensure the baby is getting enough to eat.  That may not always be possible.

Mothers may also face a lack of support from their families.  Older mothers who did not breastfeed may give poor advice or even say that the new mother should not breastfeed.  Fathers may not know what to say, or discourage it.  Or, even if family is on board, the new mother may be on her own with her newborn mere days after birth, trying to take care of herself as she recovers in addition to taking care of her new baby.

Many women give up on breastfeeding because they are squeezed by all of the responsibilities they face — and something has to give.

More and more women are experiencing hormone imbalances, in part due to all of the endocrine disruptors in our environment (plastics, certain pharmaceutical drugs, fragrances, skin care items, and more).  These hormonal imbalances can mean that women do not develop proper breast tissue/glands to be able to breastfeed, or that their bodies struggle to produce prolactin (the “milk hormone”).  This can lead to low supply, despite moms breastfeeding frequently and following all the best advice.

Unfortunately, addressing underlying hormone imbalances is not simple, and new mothers are going through a lot of hormone changes anyway.  It may not be possible to address in time to save a breastfeeding relationship.

There are many more nuanced, personal reasons why women don’t breastfeed, and it’s impossible to dig into them all here.  These are just three of the biggest ones that we are facing as a society. Why Talking About Breastfeeding is Tough Right Now (But Important)

There are women who are very much triggered by breastfeeding even entering into the conversation right now.  Some tried and tried to breastfeed their babies, and still feel anger and guilt that they weren’t able to, and don’t want to be reminded of that now by dismissive social media posts like “this is why you should just breastfeed.”  Other women simply never wanted to.  Regardless of why they’re not breastfeeding, they do not produce milk and the calls to breastfeed are irrelevant to them.  And their babies need to eat.

Breastfeeding is still relevant to this conversation, though.

There are expecting moms who are on the fence about breastfeeding — this situation may sway them to try.

There are new moms who are still trying and struggling to breastfeed — they may work harder at it, or seek support they have not yet received, to avoid having to use formula right now.

There are also moms who are practicing mixed feeding — using both breastmilk and formula.  These moms may be able to get their supply up enough not to need to supplement if they can get support.

Feeding babies isn’t black and white, all or nothing.  For the women in the middle, they need support for breastfeeding more than ever right now.  They have options that women who don’t produce milk don’t have.  But nothing can change for them unless they can access some new information or assistance.

The other reason why this is relevant is milk donation.  There are women out there who are blessed with abundant milk supplies who may be able to share.  We should be encouraging the women who are willing to do so…especially for babies with special medical needs who struggle to tolerate most formulas.  For those who are worried about sharing, milk can be tested and pasteurized by milk banks (and for infants with special needs, insurance will often cover the cost).  For others, it can be a blessing to get milk from another mom directly.

Regardless, we should be encouraging the sharing of milk when it is possible!

One of the reasons this shut down has been so devastating is because of US governmental regulatory burdens.

Laws surrounding formula production and labeling are often unnecessarily stringent.  These laws have barred new producers from entering the market, including the importing of European brands whose quality and safety standards even outpace the US.

This has led to nearly all infant formulas being manufactured by just three major producers.  Abbott Nutrition (Similac) is responsible for a whopping 43% of the entire formula market.

When the market is so concentrated, a few things happen.  First, when a plant goes down, as in this case, it is devastating to supply.  Other manufacturers cannot make up a shortfall that great in a short amount of time.

Manufacturers also have no incentive to improve the quality of infant formulas available.  Formulas are still not that close to breast milk.  And while it would be nearly impossible to replicate certain aspects of breastmilk — mother’s hormones, immunities, probiotics from mother’s gut flora, certain nutrients that are driven and changed by mother’s diet (yes, even for the start up Biomilq this could not happen), we could do better.  Not relying on corn syrup solids and using more natural forms of vitamins and minerals would be a great start.

This has certainly shown off some serious issues with the formula industry!  And parents should push for real change after this.

By the way, some families are ordering European formulas online (which are sometimes being seized at the border, so be careful) or going to Amazon and selecting “Canada” as their country in order to obtain formula right now.

There is also Baby’s Only Organic and Sammy’s Milk, both of which were forced to be labeled as toddler formulas by the FDA, but which meet the nutritional needs of infants.

What About Homemade Formula?

According to the FDA and CDC, no, absolutely not, do not do it.

There are certainly concerns about using a homemade formula.  These include:

It is important to pay attention to these issues.  If a baby, especially a very young one, can get sick or even die from formula that has not been correctly made.  (This also applies to store-bought, by the way.  Diluting it can over-hydrate baby and cause hyponatremia, which can be life-threatening.  Not sterilizing equipment or not mixing with boiled water can lead to contamination.)

I wouldn’t advise using just any recipe you find floating around social media, or trying to create your own without doing a lot of research on baby’s nutritional needs.

But, I also believe that homemade formula is a very viable option, especially right now.  If parents can’t find formula, babies still have to eat!  And practices like diluting formula to “stretch” it are dangerous.

I recommend the Weston A Price Foundation’s recipe, which has been used for thousands of babies for more than 40 years.  Be sure to make it precisely, and sterilize equipment properly!

Some families do not like seeing homemade recipes ever promoted, but I think that’s a mistake.  Parents deserve all the information so they can make an informed choice in a difficult situation.  Families need to be empowered with options, an ability to be self-sufficient.  Those families who are not comfortable making their own formula for any reason should opt for something different.

What We’ve Learned About Baby Feeding

Our world is so upside-down.

We should first, be quicker to support and encourage breastfeeding, to help the women who are able, and want to, to be successful with it.  Fewer families should need formula.  (Grab this free guide to breastfeeding nutrition.)

We need to increase access to donor milk, and encourage more women to provide it.  It isn’t a bad idea to pay women a small stipend for their milk, either, because women have to take their time, buy bags, clean and maintain a pump, and more.  Paying them a small amount would increase the availability of donor milk for those who need it.  And we need to value women and their time enough to be willing to do that.

We need to have a more diverse array of companies making formula, each with a smaller share of the market; and we need to have higher-quality options available for those who truly need it.

We need to normalize homemade formulas, but with important caveats about nutritional composition and safe ways to prepare it.  (This was normal 60 years ago and without the nutritional balance we have today!)

This situation has given us a chance to have a conversation about the greater topic of baby feeding…so let’s not waste it.

How do you feel about the formula shortage and infant feeding in the US?