Joe Rogan Should Not Apologize |
AD 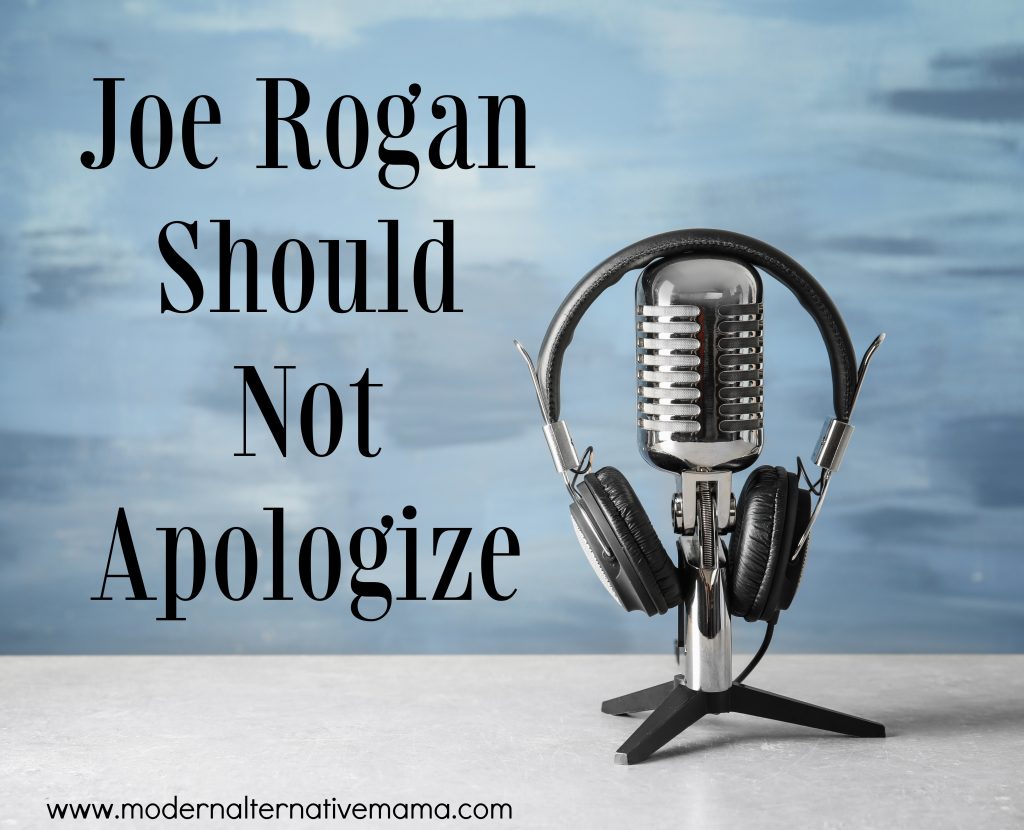 Joe Rogan Should Not Apologize

I’ll be honest: I haven’t listened to even a single episode of Joe Rogan’s podcast.  But I’m aware of the controversy surrounding some episodes he did at the end of 2021, namely with Dr. Malone and Dr. McCullough.  The world is now freaking out about all of the “misinformation” Joe has spread, and demanding that he apologize, never invite unapproved guests again, and some are even calling for him to be kicked off.

Joe has actually apologized, a bit, about the impact that his controversial episodes have had.  But he shouldn’t.  He has absolutely nothing to apologize for.

Why Joe Rogan Should Not Apologize

Joe Rogan is not a “conspiracy theorist” (and I’m going to use that term loosely, because certain things that were considered mere conspiracy theories in early 2020 — like that COVID could have leaked from a lab — are now legitimate scientific possibilities).

Instead, Rogan is a person who talks to a wide range of people.  He doesn’t take a strong position on what’s being said; he just opens up the conversation.  Rogan has had scientists on his podcast who fully believe the mainstream COVID narrative and have encouraged people to stay home, wear masks, and get vaccinated.  His podcast has not been, in any way, one-sided.

Neither Dr. Malone nor Dr. McCullough are “conspiracy theorists,” either.  They are highly-regarded, credentialed experts in their fields.  Dr. McCullough is a cardiologist who is the most published researcher in his field.  Dr. Malone holds patents for mRNA technology, on which the COVID vaccines are based.  Both are legitimate experts…who happen to have a different view of the available scientific evidence.

Once, we celebrated differences, and encouraged discussion and debate.  It used to be that anyone who understood the evidence could have a seat at the table and openly disagree.  That’s literally how we learn, how we become better — we challenge each other, we explore new ideas and interpretations.

But now, the illiberal left (they’re not liberals — “liberal” means open-minded, interested in new ideas, being tolerant of others with different thoughts and beliefs) has decided there can be only one correct answer.  How they decided which experts are “real” and which are “quacks,” I don’t know, since an increasing number of highly-credentialed individuals have been branded as “quacks” in recent years.  Maybe they flip a coin?  Or maybe they follow the experts who net them the most profit.

Regardless of how they do it, they have absolutely no tolerance or time for anyone — no matter how intelligent, science-based, or well-informed — who does not blindly agree with the “science” of the day.  They consider anyone (again, including people who have far more expertise than they do) who does not toe the line to be “dangerous.”  Legitimate scientific debate is not a thing, and alternate theories are now “misinformation.”

Saying on social media in the spring of 2020 that COVID may have leaked from a lab would get you banned.  Saying that cloth masks weren’t very effective in preventing the virus (vs. properly fitted N95 masks) would also get you banned.  Today, the mainstream media reports these as legitimate truth.  There was a debate to be had, and evidence to support both sides, but one group of people decided what “truth” was and that was it.  Until they changed their minds.

We’re in a very dangerous situation, indeed — but it’s not because of “misinformation.”  It’s because the powers-that-be are absolutely furious that the internet has equalized who can have a voice, and they can’t control what the population hears, sees, and thinks anymore.  They are unable to squash debate even as they vociferously proclaim that there aren’t two sides to any of these issues.  They scream at people who think or feel differently that they are uneducated, wrong, stupid, and “trying to politicize” things.  (Apparently, it’s not political to say there’s only one right opinion and use your political powers to try to silence your opponent and force your will on them.  Complaining about being silenced and forced is what makes it political.)

All of this to say…Joe Rogan should not apologize.  He has absolutely nothing to apologize for.  He tried to give different sides an equal platform, and let the public make up their own minds — which is exactly what should be happening.

What Should Happen Instead

The American public, on the whole, isn’t stupid.

People are capable of hearing from multiple sources and making up their own minds.  Their choices will be different, based on their own in-born personalities, political leanings, risk tolerance, health status, and more.  That’s completely normal and fine.

We cannot tell people how they should think and feel.  At least, we should not, although some people do.  We have to allow them to take in all the evidence, filter it through their own experiences and ideas, and make their own decisions.  Even if we don’t like, agree, or even understand them.

Trying to shut down alternative voices has done nothing but make the silencers seem irrational and hateful.  The public’s interest in these issues has grown massively over the last two years, in part because of the attempts to silence it.  They have to wonder what is so bad that they aren’t supposed to know about it.

So why don’t we just allow a true open debate?  If one side has no merit, then we should be able to see that via the thoughts of experts and the actual scientific evidence.

Joe Rogan should invite both Dr. McCullough and Dr. Malone back to his podcast.  He can invite Dr. Fauci and Dr. Hotez (or whoever wants to represent the mainstream side) to come on, too — at the same time.  Let the experts bring their studies and their evidence and their experiences and honestly debate each other.

No character assassinations.  No focus on “credibility” (based on completely made-up qualifiers).  It’s all about the actual evidence.  Let the experts speak freely and go back and forth and talk about why they believe X is true, or Y isn’t.

This will be how we learn.  By giving both sides an honest listen.  By speaking freely.  If someone truly is very wrong, it will become clear when they can’t produce any evidence to support their conclusions, or when the other side can produce a lot of evidence that explains why they’re wrong.

Is the illiberal left afraid of this debate?  Are they so sure they’re right — this time — that we don’t even need to talk about it or examine the science?  Or are the willing to actually hear someone out who doesn’t live inside their precious echo chamber?

Our world is fractured.  And it’s fractured because of this insistence that there is only one right way to think, be, and live.  The only way back to some semblance of peace is to actually listen to each other, to hear each other out with open minds, to stop branding others as “crazy,” “dangerous,” “stupid,” and all the other names simply for having a difference of opinion.

Can we actually do that?  Or will the illiberals learn nothing and continue to try to squash legitimate debate — to their own detriment?  (Those of us who see the science differently and can support our views with evidence aren’t going away.)

I hope to see these debates soon, or I fear our country is in for an extremely difficult future, with a verbal civil war at hand.  A fight for who gets to control the narrative and who gets to be “right.”

For now?  Joe Rogan and others like him have nothing to apologize for, and they need to stand up and say so, loud and proud.  It’s the only chance we have.

Do you think Joe Rogan should apologize or be canceled?