Why We Were Denied Women-Owned Business Certification |
AD 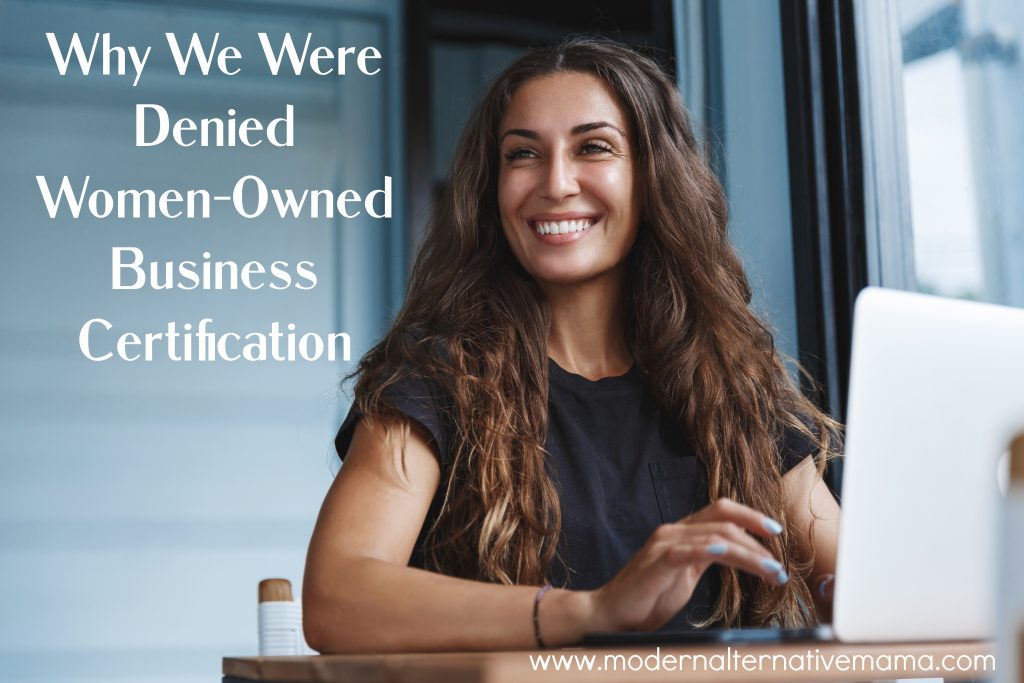 Why We Were Denied Women-Owned Business Certification

But after everything happened, I started to feel like…I need to speak up.  There’s more to this story than I can cover on social media (although I did), and I have additional thoughts I want to share.

The background: this year, we’ve been busy seeking certifications for Earthley (my herbal products business, if you’re not familiar).  We have gotten Leaping Bunny, and are working towards Non-GMO Project Verified and Certified Organic as well.  We decided to go for women-owned business because it seemed like an easy one — and an obvious one.

Since the beginning, I’ve been at the helm of the business.  I drive the decisions about products, marketing, long-term business strategy, and day-to-day operations.  My husband partners with me to do IT, paperwork, and other background business services we need.  Don’t get me wrong, his role is important, but I drive the majority of what goes on.

Further, our leadership team is 6 women (and 2 men).  We are a women-driven business.  Our staff is 80% women.  It seemed like a total no-brainer to get this certification.

We contacted Women’s Business Enterprise National Council to start the process early in 2021.

This is the story of how we were denied.

We started this process in January 2021.  The amount of paperwork required was incredible — more than for any other certification we have done or are doing.  They practically wanted my first-born!

Among the paperwork required was a business contract and list of board members and voting shares.  Like many smaller businesses, we don’t have these things.  My husband and I own the business (I, legally, own 51% exactly for this purpose — to be “woman owned”) and we make decisions together, with the input of our leadership team.

We had to scrounge up the paperwork for the certification.  We found a boiler-plate incorporation agreement online, our lawyer went through it quickly, and we submitted it.  This would become the center of their contention.

It took us almost three months to get all the paperwork done (which also included notarized documents, a copy of my birth certificate, all of our financial records, and more).  But finally, it was done.

We submitted in late April, and then we had to wait for next steps — an interview.

I had thought they would be interested in talking to all our women leaders during the interview, to get a sense of our team work and how we make decisions and how we run the business day-to-day.  They were not.  They only wanted to talk to me, the owner.

We met over Zoom (due to the pandemic).  The interview felt…odd.  They asked me repeatedly about the board members and all this paperwork and formalities we don’t have — which I told them.

Then, the interviewer grilled me about my husband’s involvement in the company.  How we made decisions.  What we did if we ever disagreed.  If he could “overrule” me.

I told her the truth — that if a decision were in his area, I would usually defer to him (although he makes every effort to tell me what is going on and ask my opinion), and if the decision were in my area, he would defer to me.  Neither of us would ever make a decision the other was not comfortable with, or “overrule” the other.

She did not seem to like that.  I was pretty sure, by then, that they were going to deny my application.

And then, they did.  We got word over the summer that our application had been denied.  They cited a few different reasons, mostly due to that darn contract.

We appealed this.  We told them that we don’t consider “CEO” to be the highest office in the company.  My husband sits as CEO because that is the person who does the paperwork and oversees IT and handles the background business stuff.  I am the CMO and I direct products, marketing, and vision of the company.  My role is more important, and I don’t want to be stuck doing paperwork instead of R&D and marketing.

We also pointed out that the contract does not give the manager these powers.  The manager can only alter the contract if the theoretical board agrees, and legally I have 2/3 voting power.  The manager also can only settle disputes if not personally involved in them, which my husband always would be.

I already had a very uncomfortable feeling about this organization and this process, but we resubmitted with this information.

Then, in mid-October, we received the next email: denied again.  This time, they cited a whole bunch of other nitty-gritty details of the “contract” that weren’t even in the original denial.  They seem determined to deny us, no matter what, and I am done with the organization.

The biggest take away from this, for me, is that they did not believe me.

This was not enough for them.

They simply did not believe that I was really leading the business.  They did not trust my words.  They believed a misinterpretation of a boilerplate document that I told them did not govern how we ran our business more than they believed what I told them.

Our reality did not matter.  We really run the business with mostly women, at every level.  They were so suspicious, so sure that a man must be pulling the strings behind the scenes, that they did not trust my words.

That is not feminism.  That is not supporting women!  I don’t want to work with an organization that does not believe or trust what I say.

There’s a mantra in feminism to “believe women.”  But the reality seems very situational.

Many women seem to only believe other women who align with what they think and believe.  Women who think, believe, or behave differently are suspect.  Those women might be brainwashed or secretly controlled by men.  (Because women couldn’t actually, logically, disagree or have a different idea of how to be.)

This is ridiculous, of course.  No one knows why any specific woman makes the decisions that she does.  And yet, I’ve heard that frequently — “She wouldn’t do that if she hadn’t been convinced/brainwashed by the patriarchy.”  You don’t know what complex factors led her to the decision or way that she is.  Assigning her motives she may not have is dismissing her.

Some feminists have argued, “But I was in that situation/someone I know was.  They were brainwashed.  They needed to be rescued.  Therefore, everyone in that situation is brainwashed and needs to be rescued.”  This is a poor assumption.  While this happens for some women, think of how strong those women were to get away — to reject whatever it was — to come to their own decisions in the end.  You just can’t assume if something was true for one person, it is true for all of them.

Further, assuming that many women are controlled by men even when they tell you they’re not is to give men power they don’t have (and many don’t want).  It’s very disempowering to women.  How can we ever rise above anything if women don’t believe other women, and just snipe that men are secretly controlling them?  How can we do better if we’re focused on what men might or might not be doing or thinking?  If we’re left wondering who is acting in what way because of men?

We need to believe women.  Trust the words she says.  Let her be who and what she wants, even if someone else thinks it’s “not in her best interests.”  (She is a free-thinking adult!  End of story!)

The Truth of Life at Earthley

I believe in egalitarian leadership.  Women aren’t above men and men aren’t above women.  I would not tolerate a person in my organization — male or female — who looked down on others and tried to exact control and power.

I expect my leadership to be smart, strong, without ego, able to communicate clearly and work as a team.  Everyone is valued.  Everyone is heard.

Where women sit as leaders, men are expected to treat them with respect.  (We have never had an issue with a man disrespecting a female boss.)

This is our reality.  We don’t need to hate men.  We don’t need to be suspicious of them.  We work under the assumption that women are smart and capable and can speak for themselves.  We also assume that men will respect us and work with us effectively and appropriately and we approach them as such.

Women don’t get respect by waxing poetic about the patriarchy and being suspicious of other women.  They get it by being strong, assertive, trusting each other, and making their way in the world.

I’m speaking out because I am a strong woman, who is successful in business, and who wants my story heard.  I have been disrespected and dismissed more by a certain type of woman than I ever have been by men.  And I won’t tolerate it.  I am using my voice to say, the assumptions being made by third-wave feminists are wrong and are harmful to women.

As for my company, well.  We know our truth, and that is good enough for me.

How do you feel about women-owned business certifications?