Delta Variant Shouldn’t Make You Angry at the Unvaccinated |
AD 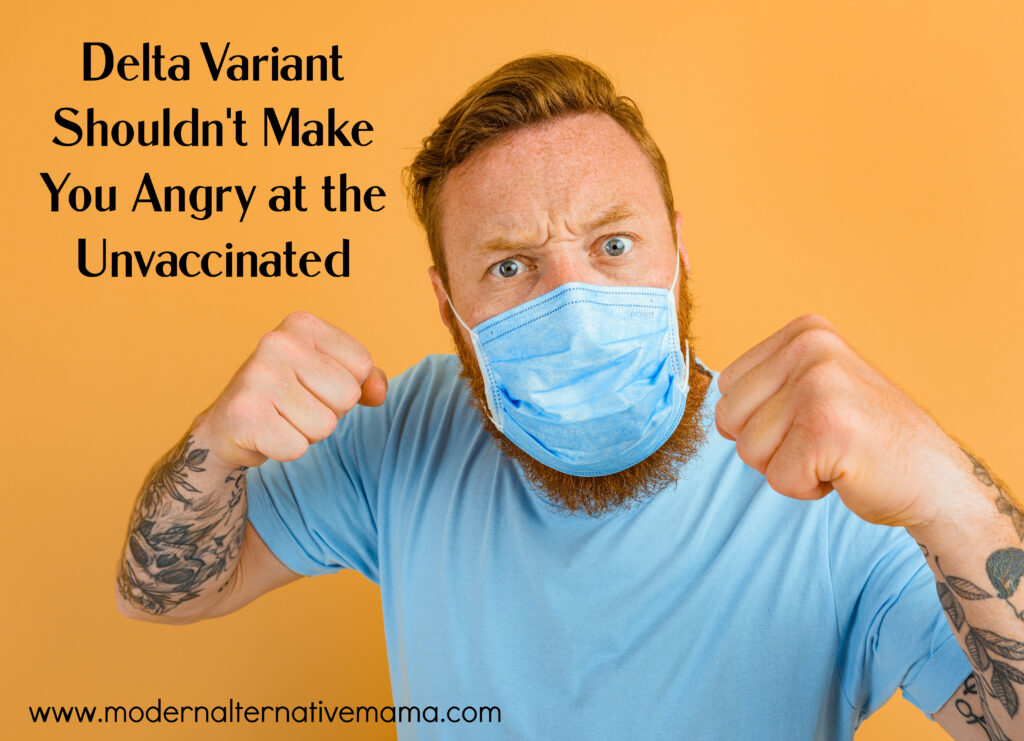 Delta Variant Shouldn’t Make You Angry at the Unvaccinated

Mashable recently posted an odd, irrational tirade from editor Rebecca Ruiz, entitled Delta variant is stoking our anger at the unvaccinated. Don’t tell us to calm down. It’s the same tired tripe that’s everywhere these days: the poor, long-suffering vaccinated have had it up to here with the pandemic, and all the blame for the situation is squarely on the unvaccinated.

Ruiz starts off by explaining that she’d just started to feel okay again about going out in public, hugging family members mask-less, and sending her kids back to school in the fall.  Until one fateful day….

Ruiz writes, “I stayed mostly calm until the Centers for Disease Control and Prevention announced in late July that vaccinated people can infect others who’ve been immunized. The desperate rage came on quick.”

Now, it’s understandable that Ruiz felt angry, scared, helpless, and hopeless from that news.  Obviously, having done everything “right” according to the mainstream for a year and a half, and then hearing that it wasn’t enough and there is still uncertainty is hard to hear.  Everyone was told that vaccinating was essentially a magic bullet, and that life could and would go back to normal once we had a vaccine available.

However, instead of taking this situation for what it truly is — a naturally unpredictable situation, as viruses don’t play by our rules — or even being angry with the vaccine manufacturer for a product that isn’t really working, Ruiz decides to make the unvaccinated her scapegoat.

This is where we have a problem.

Delta Variant Shouldn’t Make You Angry at the Unvaccinated

Like Ruiz, nearly everyone is weary.  Everyone is stressed out, has known family and friends who have been sick (or have been sick themselves), has lost jobs or income, has struggled to find childcare or deal with school issues, and has dealt with all of the uncertainty.  No one has been untouched by this pandemic.  Someone choosing not to get vaccinated does not change any of that.

The “unvaccinated” are not some freewheeling, unstressed-out, party-time group that have not even noticed what’s happened over the last year and a half.  Ruiz acts like this is the case, and that she, and others like her, are the only ones who have struggled.  She creates an “us” vs “them” scenario in her mind.

And in her — quite understandable — frustration with a situation that is beyond all our control, she needs someone to blame.  Irrationally, she chooses the group of people who haven’t felt or reacted the exact same way as she has to the stresses of the pandemic.  It’s their fault.  If they would just feel, think, and most importantly, react (by getting vaccinated) the same way she did, then everything in the world would be okay and feel safe again.

Ruiz, of course, is not alone.  Many people feel increasingly weary and desperate, wanting to feel safe again, wanting this situation to be over.  They feel a complete loss of control, and are grasping at straws for anything they might be able to do to change their fortune.  But they are dangerously choosing to “other” people, blaming and shaming them, suggesting they should be barred from society.

This is a situation that must stop.  Ruiz and others like her need to understand that it’s okay to feel scared and stressed, but it is not okay to blame others.  That will only lead to hate…and possibly violence.

Many of the unvaccinated were barred from businesses last year (if they didn’t wear a mask), yelled at, mocked, jeered, or even physically assaulted.  They are no less stressed out by what they have faced and how they have been treated.

Anger and hate is becoming deeply entrenched.  When it comes down to it, it is the vaccine pushers who need to stop.  Making everyone else get vaccines won’t make them feel safe, as the virus will keep mutating (much like the flu) and still be able to infect people, including the vaccinated.  There is no scenario in which the virus fully goes away and everyone feels 100% safe again.

Learning to Live with the Virus — and Each Other

Instead, we must learn to live with the virus, to take calculated risks, and to stop with the hate and anger.  We might not react to the situation the same way, but we are all in it.  Some choose to square their shoulders, take a deep breath, and understand that we’ve been dealt a hand we can’t control, and we’ll do what we can to cope with what we’ve got.  We may avoid going certain places, we may wash our hands more often, we may stay home if we have any symptoms of illness (just in case).  And that’s all very rational.

What’s not rational is this insistence that there is only one way to mitigate risks — vaccination, which is not even working in some cases — and the fury at those who don’t fully buy in.  Get a vaccine if you feel it is the best way to keep yourself safe, but stop blaming those who feel otherwise.  Your vaccine truly doesn’t work any better if others get theirs.  (This particular vaccine doesn’t stop you from getting sick or prevent transmission; it is only designed to mitigate symptoms and lower the risk of death.  So it can’t create “herd immunity.”)

If a person’s gotten their vaccine, they’re as protected as they’re going to get, no matter what anyone else around them does or doesn’t do.

The terrified need to find more productive ways to cope with their frustration and anger, and stop taking it out on their fellow citizens.  It truly is tiresome and potentially dangerous, and it is dividing this country further.  Read that again: it is valid to feel frustrated, stressed, angry, hopeless, or whatever else one may be feeling right now.  But it is not okay to blame innocent people.

All we can hope now is that the clear crisis of stress and mental health in this country doesn’t become any worse, and that people remember that others are basically good, no matter which side of the debate they fall on.  We have more in common than not, and one’s decision to take — or not take — a for-profit pharmaceutical product doesn’t define who they are or whether or not they’re a good person.

Ruiz could take a lesson from this: we actually are all in this together, but we’re unique individuals with different ways of thinking, feeling, and reacting to situations, too.  Mutual respect will go a long way, and not focusing on our fear or hatred of our fellow man can do a lot to help us feel a bit less stressed out in a difficult situation.

Do you think the hatred towards the unvaccinated is out of control?