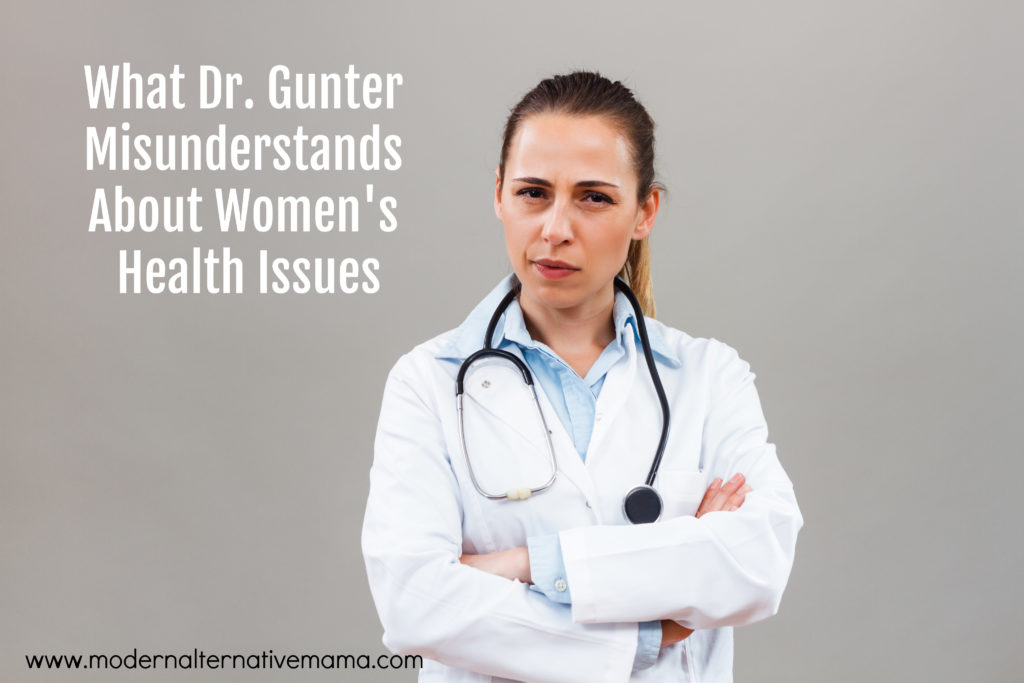 A few days ago, a “star” in the mainstream medical community that I did not know about came to my attention — Dr. Jennifer Gunter.  She’s an OB-GYN and popular Twitter personality, as well as the author of The Vagina Bible.  Her no-nonsense attitude and anti-natural stances have gained her quite a following.

She first became famous when she attacked Gywneth Paltrow’s natural brand, Goop, for selling jade eggs and yoni steams — apparently, these practices offended her and she felt no one else should participate in them.  They “aren’t evidence-based.”  Since the world loves a good mud-slinging, especially at the expense of the natural-minded, everyone loved her for it.

Dr. Gunter is a self-proclaimed feminist, who claims to be about supporting and informing women.  But she does this by denigrating many choices and practices she doesn’t understand.  Jennifer Block wrote a very thoughtful piece about this on Scientific American, but after Gunter’s many supporters attacked SA, they removed the post four days later.  Gunter and her fans are celebrating this removal as some kind of victory.

After taking some time to read through some of her work, I felt I needed to speak up.

Dr. Gunter’s intentions are good.  She wants to share facts about the world as she understands it, and help women to make the best decisions with their health.  That’s admirable, because so many women still understand so little about their bodies and need to be empowered to understand and care for them in a healthy and safe way.

But unfortunately, she achieves this goal by weaponizing modern (often incomplete) science, and striking back at critics who rightly point out the flaws in her arguments.

Ultimately, this discussion isn’t about Dr. Gunter, or any other individual.  It’s about recognizing that there are different ways of being and believing, and that women who do things that someone doesn’t like shouldn’t be shamed or told they are stupid for it.

There are still a lot of health topics that haven’t been touched by allopathic medicine — or haven’t been properly investigated.  What we rely on, where there is a dearth of evidence, is historical practice and lived experiences.

Dr. Gunter, and others, still feel so supremely confident in standing on this limited knowledge and dismissing historical knowledge and lived experiences of women.  No one should be saying, with our current understanding, that it’s not possible for women to have had experiences that don’t align with current scientific belief.

It’s a symbol of a much bigger problem.  The problem that so many doctors and medical professionals stand so firmly for their belief system that they cannot see that there are ways outside of it.  They are often very anti-natural, treat other health modalities as an enemy, and they belittle and chastise the women who use it.  They assume that women who choose an alternative have done so because they are ignorant, stupid, or have fallen for predatory marketing practices by “Big Natural.”

(“Big Natural” is hilarious.  They don’t use the government to mandate their products, pay for their products or services, or excuse them from liability.  If they’re big, it’s because people are seeking them out and choosing them.  These things are not the same.)

They cannot conceive of a world in which there is truth outside of their education, or where women can look at the available evidence and come to a different conclusion than they have.  Some will say, “Well, of course they can choose whatever they want,” yet they attack and try to shut down the voices of those who oppose them — and actions speak louder than words.

Women want to be heard.  And believed.  They want to be allowed to choose whatever resonates with them, and not feel like they are being looked down upon or told they’re brainwashed by other women.

When people with power use their platforms to mock and belittle certain ways of being (not just promote what they believe in, which is certainly fair), women don’t feel heard at all.  They feel angry and powerless.  Of course they are looking for something else!

So many doctors are blunt and arrogant.  They state what they believe to be true and leave no room for caveats or exceptions.  “That doesn’t work.”  “You got bad advice.”  “Don’t do that.”  And when doctors are working with vulnerable patients from a position of power, that is often read as chastisement.

Instead of apologizing for any role she may have played in this, Gunter chooses to play the victim.  Many quotes can be found on Twitter, but here is an interesting one:

“What is clear to me is the people attacking me have never read anything I have written or have chosen to ignore it or to quotes lines out of context or mischaracterized it.” –Jennifer Gunter, Twitter, 12/1/2019

The only way that someone could disagree with her, is because they don’t understand or aren’t familiar with her work.  There is no way that they could simply disagree in a rational fashion.  She spends an inordinate amount of time talking about the way she is treated on Twitter.  (While I don’t condone anyone attacking her, it is perfectly reasonable that someone with a large platform will face others who respond to or disagree with them.  She needs to get used to that.)

The Medical Industry is Heavy-Handed

We live in a very precarious world right now.  Women are ignored, dismissed, mistreated on a regular basis.  Obstetrics is the least evidence-based field, and women are often pushed into interventions they don’t want or need.  If they try to refuse, they are told their babies will die or they don’t care about their baby.  Some doctors hate birth plans so much, they’ll issue this order just to punish the mom….

After birth, women are bullied into receiving the vitamin K shot (here’s why you should think about skipping it), the erithromycin ointment, and possibly other interventions.  Many hospitals will now threaten to call CPS on terrified, stressed-out new parents if they don’t comply — and so they do.

Then there’s the pressure to vaccinate.  Doctors even have learned scripts to coerce parents into getting them via emotional manipulation.  (See how they do it and how to avoid falling for it.)

They team up with legislators to actually take away parents’ right to choose, such as in California and New York, where exemptions were recently removed (with medical exemptions so heavily restricted that they’re basically unavailable).

And they feel entirely justified in doing all of this, because parents are “ignoring science” and “making dangerous decisions.”  They are that sure that their anti-natural stance is right, that they can use all of their power to coerce and manipulate, and take away rights.

Then, they have the audacity to turn around and claim that somehow, those of us who are opting out of this system are somehow hurting them!

Apparently, we’re ignoring their expertise (to our own detriment — never mind that “medical mistakes” are the third leading cause of death in this country) and we’re hurting their feelings by speaking up about the way they treat us.  They decide to play the victims, even though they were the perpetrators.  They gaslight huge segments of people who have had bad experiences with them, or good experiences with alternatives.

I’ve been writing about this for ten years, and feel like a broken record by now.  But the abuses keep on coming, and even getting worse.  Those of us on the “Big Natural” side (so laughable) are just trying to offer support and options to women who have been hurt by the mainstream “care.”  We believe women.  We hear them when they’ve been dismissed.

Doctors need to realize that they’re not always right.  Their education is not sufficient reason to be arrogant and condescending towards patients.  If they’re going to be in a role that serves the public, they must see themselves as guides and be humble about their role — especially since they can literally hold someone’s life in their hands.

I don’t enjoy speaking up against others.  But Gunter’s fame and large following show what a problem we have here.  It’s very us vs. them. They’re so bothered by our very existence that they can’t help but attack and belittle. (For the record, I would be very happy with a world where allopathy is one of the health modalities, and where they worked alongside other health modalities cooperatively.  They have a lot to offer in certain areas.)

The medical profession seems to see the rise of Big Natural as a direct affront to who they are and what they do.  And honestly, in some ways it is — people feel mistreated, and go looking elsewhere.  In other ways, it isn’t — people choose what resonates most with them, regardless of what is out there.

Rather than taking aim at people who want to do what works for them, they should stop and look at their own role in what is happening here.  If they did not mistreat people, and if they admitted there are other ways out there and information they don’t understand, they would capture a lot more people.  Instead, they just lash out and engage in blaming people.

If you’re someone who chooses a natural path, and/or someone who has been harmed by a doctor, please stand up and share your story.  Let the anti-natural Dr. Gunters of the world know why it’s so important to you to have other options and to be heard.  Don’t stay silent in the face of bullying.  We must bring about change.

How do you feel about the anti-natural crowd and their attacks?