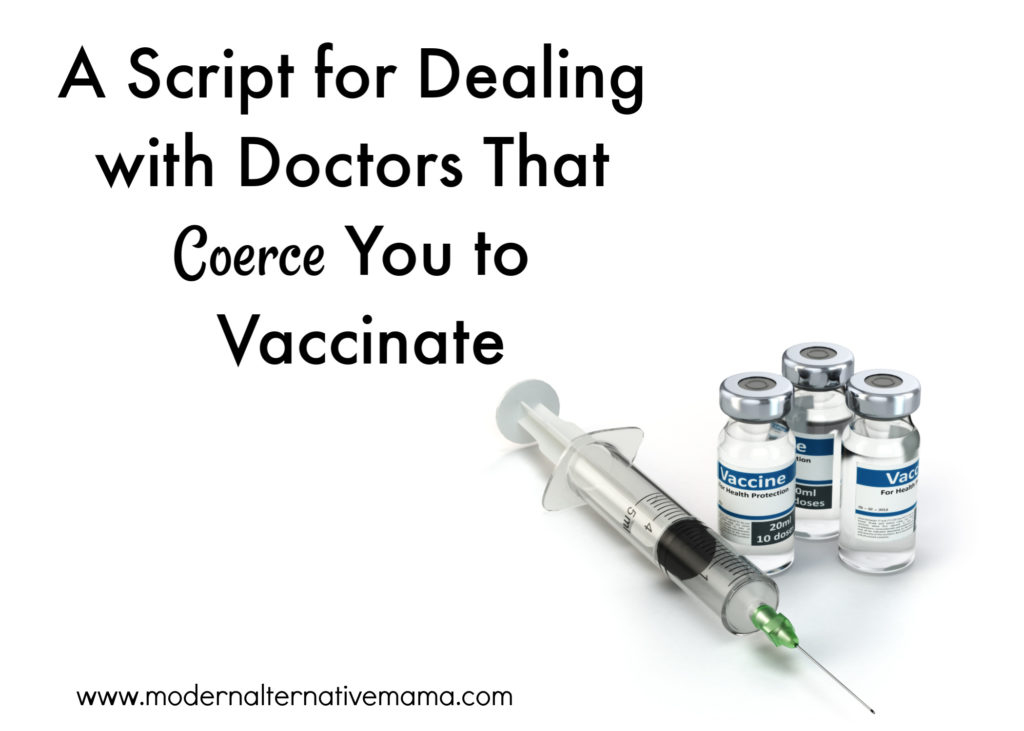 A Script for Dealing with Doctors That Coerce You to Vaccinate

Recently, Kaiser Permanente created a 38-page document on how to “deal” with parents who don’t vaccinate.  It’s hardly the first of its kind — doctors nearly spend more time in medical school and conferences learning how to coerce, than about vaccines themselves — but it’s just more proof that they don’t care at all about informed consent.

Be warned: it’s a disgusting example of how to avoid addressing a parent’s actual concerns, and simply manipulate them into doing what they want (vaccinate).  It has no place in any professional’s practice.

Because doctors are increasingly being given this script, we’re going to teach you a script on how to combat this type of propaganda.

How to Recognize the Script

First, let’s learn how to recognize when this is being used on you.

This strategy has four parts to it:

“Cognitive Ease” means, don’t engage the parent’s brain or ask them to think through their decision.  In fact, specifically avoid making them think critically, because they’re more likely to just agree if they aren’t really thinking.

“Natural assumption” means stating that the child will be getting vaccines.  For example, “It’s time for little Timmy’s vaccines today, so I’ll go ahead and order them.”  Don’t ask the parent if they want them, don’t leave room for disagreements, just make assumptions.

“Identity strategy” means try to tell the parents that they clearly want to be part of a group called ‘good parents,’ and that good parents protect their children via vaccination.  (This is why the pro-vaccine effort in my area is called “Project Love.”)  This is an incredibly important part of their strategy; they want you to feel belonging to this group of ‘good parents who vaccinate.’

“Advantageous terms” means that they will repeat key phrases like “protect your baby” to manipulate you and make it seem most beneficial to vaccinate.

In addition to these four points, they also recommend an “emotional appeal” where you tell scary stories about babies who get very sick or die from diseases.  They recommend avoiding answering direct questions or concerns, and instead, trying to convince parents that they’re on the same page with wanting to ‘protect’ the baby.

They also recommend using the term “protein” instead of “antigen” to discuss vaccine ingredients, because it sounds more benign.  Plus, they say to only address the antigen load of the vaccines and ignore all the other ingredients (even though antigen load is rarely a concern).  They even recommend comparing vaccines to homeopathy and calling them “natural!”

New parents are often worried about doing the right things, and keeping their baby healthy and safe.  There are a lot of conflicting pieces of advice flying around about everything.  Plus, mom’s hormones are all over the place, she’s probably sleep-deprived, and she’s is a very fragile place.

When someone is in a vulnerable, emotional state, they’re not thinking at a higher level — engaging in critical thinking.  They’re making decisions based on gut feelings and beliefs.  While peoples’ minds can be changed, over time, by facts (if their original decision was fact-based to begin with), it is easier to simply manipulate them.

It’s true that emotion can’t be countered with fact.  And, it’s often true that new parents are at the very beginning of their vaccine research, or have only ‘heard’ a few things and haven’t really dived in.  They are vulnerable to being manipulated because their beliefs aren’t firm yet and aren’t grounded in actual information.

Doctors are counting on this.

Doctors are preying on this.  They are trying to make you feel like they’re on your team, even when they’re actually narcissistically manipulating you.  They want to pretend to hear your concerns, while plotting their next move.  They want to give you their approval, from their position of “authority” over you.

Here’s how to deal with this.

A Script for Dealing with Doctors That Coerce You to Vaccinate

First, take a deep breath.  You are not the first parent to deal with this, and you will (sadly) not be the last.

Here are some things to remember before you even go to the doctor’s visit:

The Doctor is Not an Authority Figure

Doctors position themselves as a type of authority in our lives.  They tell us we ‘have’ to take our babies in for well visits, and we ‘have’ to follow medical advice.  But in reality, we don’t.  We can (and should) use our brains and make our own medical decisions.  You can also fire any doctor who is not respectful of your role in medical care, and find a new one who is.  You have every right to say “no.”

You Do Not Have to “Please” Anyone

It may feel very uncomfortable to have the doctor and/or nurse frowning at you, telling you scary stories, or even yelling at you.  Some may cry or beg or plead with you.  But the doctor’s comfort and personal feelings are not your responsibility.  You are not seeing the doctor to “please” him or her — and s/he shouldn’t be asking this of you.  It’s okay if the doctor is unhappy with you or upset after your visit.

Bring Along an Advocate

If you are feeling especially vulnerable, either at this point in your life, or because you’re not a confrontational person, take along an advocate who has no problem saying no.  They can stand up for you and remind you of what you had planned before the visit.  They can help you engage your brain and think critically when the doctor is trying to prevent you from doing so.

You Don’t Have to Make a Decision Today

Vaccinating is not “now or never.”  If you feel bullied, worried, and unsure about your decision, simply say “Not now.”  You should not make a decision based on fear or manipulation.  You can always decide to vaccinate later, but you can’t take it back.  Don’t give in — wait until you feel truly comfortable.

Once you head into the doctor’s visit, be prepared for the conversation that is going to happen.  Be ready to call out the doctor’s manipulative techniques for what they are, and let them know that you will be a partner in your child’s health care — or you’ll find someone else who treats you with respect and as a true partner.

Doctor: “Hello, Mrs. Cleaver!  It’s good to see you today.  And how is baby Victory doing?”

Doctor: “Great, that’s what we’re here for.  It’s also time for Victory’s 2-month immunizations, so I’ll just call the nurse real quick and have her get that tray ready.”

Mrs. Cleaver: “No thank you.  We aren’t doing vaccines today.  We are just here for a quick check up.”

Doctor: “Oh.  Was there a specific concern or question you had, that I could answer quickly?”

‘No’ is a complete sentence.  You are not getting into an argument.  It will not change anyone’s mind and will waste both your time.

Doctor: “Well, a lot of my patients are concerned about things they read on the internet.  Listen, don’t worry about that stuff.  What matters is that Victory is protected.  The best protection we have is vaccines.  I wouldn’t want anything to happen to her, and I know you wouldn’t either.”

Do not rise to the manipulation of ‘protection’ or threats against the baby’s safety.  Don’t engage.  Ask to move on.

Doctor: “I will certainly do that check up!  I just want you to know that before vaccines were available, my colleagues often watched babies dying of these horrible diseases.  And I would just feel so terrible if anything happened to Victory.  Please consider getting at least one vaccination today.  Any delay means a delay in protection.”

Mrs. Cleaver: “Doctor, I am not here to discuss vaccines.  I have made my decision.  And I do not appreciate you attempting to use emotional manipulation on me to try to sway me.  I make decisions based on facts and science.  If you can’t respect me enough not to coerce me, I will have to find another doctor.”

At this point, it could easily go two ways….

Doctor: “Oh, I’m sorry, Mrs. Cleaver!  I just feel so strongly about vaccines.  Let’s table this discussion for now, and have a look at Victory.”

Doctor: “How could you accuse me of manipulation?  I only care about Victory’s health and safety.  You need to vaccinate, both for her safety, and for the safety of the general public.  It’s irresponsible and selfish of you to refuse this life-saving protection for her.  In my practice, I do not allow people who refuse to vaccinate.”

Mrs. Cleaver: “We will be leaving immediately, and I will be filing a complaint with the medical board for your unprofessional, rude behavior.  You cannot continue to bully parents like this.”

The doctor’s manipulation script assumes you won’t know what’s happening, and will respond to the techniques.  In this script, you know what’s about to happen and are prepared to avoid being manipulated.

Don’t give the doctor an opening to argue.  Try to avoid the topic all together.  The doctor’s goal is to normalize vaccinating, and to make not vaccinating seem like a risky choice.  But you do not have to let the doctor play the offense and force you to play the defense.

Because it’s hard to know the doctor’s intentions, and most doctors are being trained to manipulate in this manner today, it’s better to just avoid the conversation.  Most doctors also don’t have all the facts and aren’t going to share both sides with you anyway — they will only share cherry-picked facts from their side.

Your ultimate decision to vaccinate — or not — should not be based on fear.  It shouldn’t be based on emotional manipulation.  It should be based on you writing down all your questions, and then seeking science-based answers to those questions.  Only when you feel that you have all the knowledge, and you are totally comfortable with your decision, should you make one.

Anyone who wants you to abdicate that responsibility, stop asking questions, and do what you’re told is not on your side.  They do not consider you an intelligent person, nor a partner in your child’s health care.  They see you as a parent to be “dealt with.”  I suggest not continuing to employ such a doctor, and looking for one who has actual respect for you.

Have you been coerced into vaccinating before?