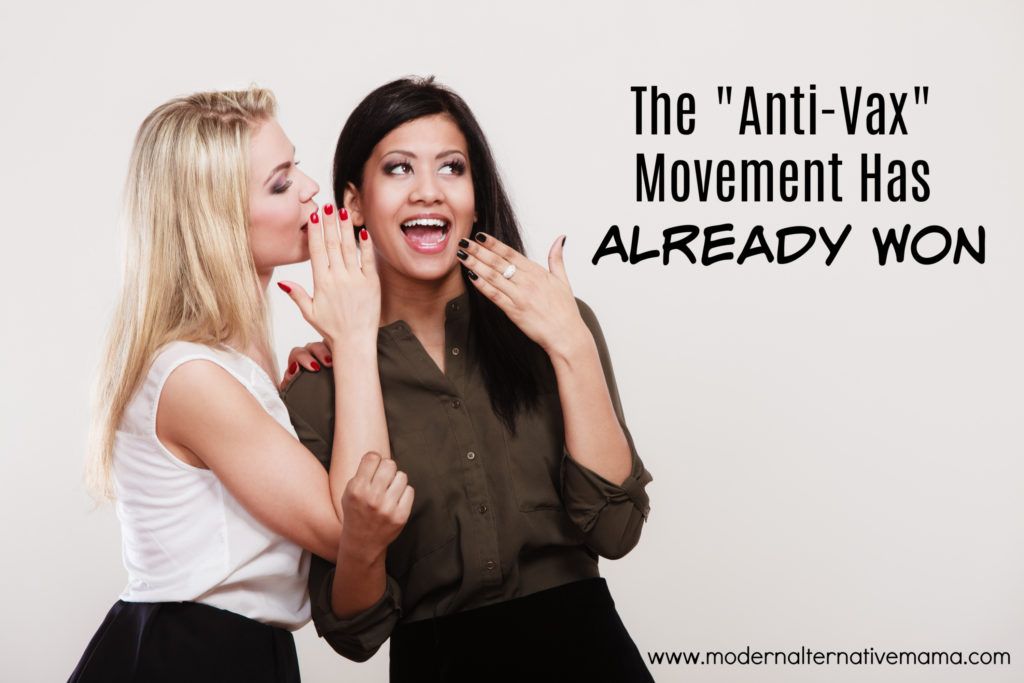 The “Anti-Vax” Movement Has Already Won

This week, the organization Shot@Life is holding their 8th annual conference in Washington, DC.  Vaccine developer and spokesperson, Peter Hotez, is keynoting this event.  A few days prior to the event’s beginning, Hotez made a very…interesting Facebook post.

This post, which I’ll share in just a minute, shows how utterly desperate the pro-forced-vaxxers are at this point.  They have already lost.  In fact, they lost four years ago.  It has just been a wild show since then, as they keep trying to pretend there are no legitimate questions to ask about vaccines and that only a few fringe crazies are even asking.  But this couldn’t be further from the truth.

We have won.  It’s just a matter of everyone realizing what’s really going on here.

This post scared and enraged many.  But I laughed and felt very excited.  Because I saw through his words to the absolute desperation behind them. So, no big deal.  He’s just going to get rid of all vaccine exemptions; “dismantle the anti-vaccine empire” by removing access to ALL websites, books, and documentaries that question vaccines; and get the government to push large private businesses to censor/remove all vaccine information from their platforms.  Should only take a year and a half and they’ll be in control of the conversation again.

Regardless of whether or not you vaccinate, I think we can agree that this is majorly over the top.  What authority do they have to literally squash the viewpoint of millions of people?  Remove peoples’ private websites and ban their books and movies?  This would be North Korea-level censorship.

And it would never work.

People in America don’t like to be told what to do.  The more people try to stop them and control them, the more suspicious they become.  It would be impossible to control peoples’ speech and content to this level, and there would be a mass awakening to the real agenda here.

What’s so wrong with asking a few questions, and looking at the other side of the science?  (Nothing.  Unless you stand to profit off people doing as they’re told.)

The “Anti-Vax” Movement Has Already Won

This is the truth.

Recently, I talked to someone who knows a Facebook “insider.”  This guy said that when it comes to vaccine-related posts on Facebook, it’s a 50/50 split between pro and anti.

I pulled up Amazon, and looked through their top-selling books in Vaccination.  9 of the top 10 are questioning vaccines, and the last one is a general baby/parenting book. (You can see the list HERE.)

When forced vaccination bills pop up in various states, hundreds or thousands of people show up to protest, and most such bills end up squashed.

People aren’t talking openly about it as much as they should (although a lot more than the powers-that-be would like) because of the hate, anger, and fear that the mainstream instills in people.  They want you to believe that people who question vaccines — any vaccines — are part of an anti-science fringe movement, and it’s okay to bully them because they’re stupid.

But they’re lying to you.

Most people are either pro-choice (vaccinate or don’t; it’s up to you) or are actively questioning at least some vaccines.  To the vax-pushers, if you fully vaccinate except Gardasil or flu shots, or delay/space, you are “anti-vax” and you are dangerous.  But in reality, we are the majority.  The majority who demand informed consent and the right to make our own medical decisions.

(What a scary thought, no?)

Right now, the massive overreactions and the intense hate is the last grasp of the utterly desperate.  They know they no longer have control over this conversation.  They’re not thinking logically.  They’re literally trying to force their will on people.  And this means we have won…and all we need is for people to realize it, so the floodgates can open.

This is not about what decision you actually make.  This is about retaining the right to make your own decision, and to get full informed consent about vaccines and all other medical decisions.

Over the weekend, I decided that we need to humanize the “AV” movement, so that the hate can stop.  If we can break through the silly narrative that we’re all uneducated, anti-science loons, and share what our real concerns are, where we get our facts, and who we really are…then people will have to confront us as humans, instead of a faceless mob.

I made this graphic: I used the hashtag #facesofAV.

These graphics are easy and free to create in Canva and PicMonkey.  If you don’t vaccinate, or skip some vaccines, I invite you to create your own.  Use the hashtag.  And, if you want to amplify it further, email it to me at kate@modernalternativemama.com and I’ll share too.

We need to be willing to stand up and speak out, even if we’re afraid.  Some of the people who have done this so far said they were very worried…but they got overwhelming support, even from people they didn’t expect.

We can’t let the mainstream force us to be silent any longer.  Those of us who think that everyone should get to make their own decision on vaccines actually are the majority now!  So let’s make everyone else feel comfortable speaking up…reaching out…asking their own questions.

A Call to Action

Speaking out to our friends, family, and neighbors is just one thing.  We need the general public to be aware that we, who want our medical freedom, aren’t going away or quieting down.

But we also need to be aware that the government and those in power aren’t going to stop, either.  They still want to try their last, desperate measures to control the conversation again.  With that in mind, there is a hearing coming up very soon, and we need you to get involved.

On Tuesday, March 5, at 10:00 a.m. The HELP Committee (Health, Education, Labor and Pensions) will hold a hearing, Vaccines Save Lives: What is Driving Preventable Disease Outbreaks?

Last week, the FDA commissioner made a vague, yet ominous threat that if states don’t eliminate vaccine exemptions, the federal government may have to step in.  Even though this violates the 10th amendment to the constitution.

This federal response or potential legislation could be discussed at this hearing.  It is incredibly important that you flood your representatives in Congress with calls and emails to let them know that you do not support any vaccine mandates at any level.

You can get more details on this HERE.  On that page, you can also send a pre-written (but editable) message simply by entering your name and address — it will auto-select your Congress members.  This takes one minute — do it!!

Now is the time, and everywhere is the place.  Our movement has already won in spirit; we just need to band together and fight the last of the legislative efforts to remove our freedom.

And our friends who vaccinate?  Stand with us now.  We support your choice; we’re asking you to support ours, too.  There is room for us all to do what we think is best for our families, and fight for the right to keep it that way.

What do you think about the “anti-vax” movement right now?