Vaccine Injury is NOT Neurodiversity |
AD 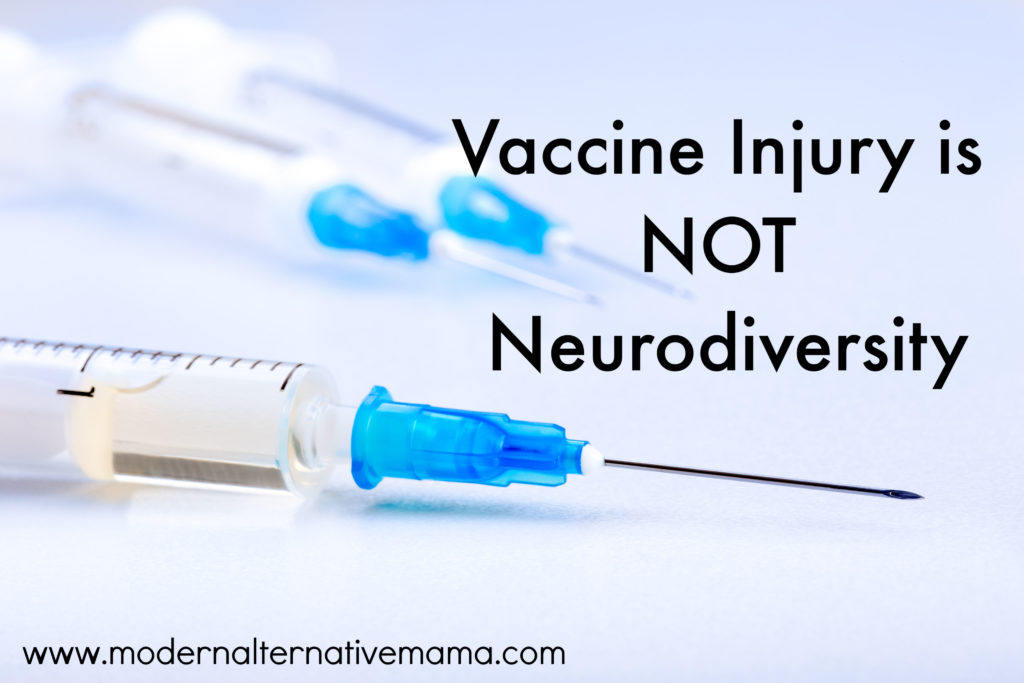 Vaccine Injury is NOT Neurodiversity

The other day, I was scrolling through my Facebook feed when a post popped up.  It dealt with vaccines and whether or not it was okay to give them to children who can’t consent.  A fairly good debate was happening on the thread…until someone popped on to say “Stop hating on autistic people!  You are all awful and harmful!”

Not one person had actually even mentioned autism up to that point.  The debate centered around efficacy vs. potential side effects of vaccines, but autism wasn’t one of the ‘side effects’ named.  But this person felt the need to make an assumption, and then use emotive rhetoric to shame everyone on the thread.

This is not the only time I have seen this lately.

In fact, in groups that are not about vaccines and have a mix of people who are both for and against them, pretty much any time the topic comes up, things happen this way.  People go back and forth, talking about the risks of disease, vs. the risks of vaccines (typically, discussing the possibility of severe allergies, autoimmune issues, learning disabilities, death, as well as the corruption surrounding vaccines).

Then, someone pops into the thread and ignores all of the information that has been shared, and turns it into a “you anti-vaxxers hate autistic people” tirade.  When no one said ‘autism’ up to that point.

This has to stop.

The Propaganda is in Full Force

This is the fault of the neurodiversity movement, and it’s frankly the most successful and damaging piece of propaganda yet.

When the medical industry couldn’t convince parents to keep vaccinating by parroting “Vaccines and safe and effective, the end!” they decided to try emotional manipulation instead.

First it was “Vaccines don’t cause autism!”  But with thousands of stories of kids who had been developing typically and then regressed into ‘autism,’ they didn’t get very far with that.

Then it was “Anti-vaxxers are stupid and prefer dead children!”  Most people didn’t buy that, either, seeing as people who are more educated are less likely to vaccinate, and we’re not exactly seeing unvaccinated children dying in droves (or hardly at all).

Then, in our post-PC culture that is extremely aware of peoples’ rights and protections, they decided to equate what used to be called Asperger’s or “high functioning autism” with severe, regressive “autism” and claim that it’s genetic, people are born with it, and that anyone who doesn’t fully accept them as they are, is a hateful bigot.

That view is unique in terms of our societal approach to disability or dysfunction in any sense.  With just about everything else, we acknowledge that people who have a disability are worthy, valuable humans who need extra understanding and support, but that we’d also like to prevent others from having the same experience, if possible.

We value people who have cerebral palsy as individuals, and see them as ‘differently abled,’ but we still try to prevent birth injuries that cause CP.

We value people who have spina bifida as individuals, but we still tell pregnant women to supplement with folate in order to prevent it, and related neural tube defects.

We value people who are deaf, but we still try to prevent non-congenital forms of deafness.

Wanting to keep others from having to struggle or having trouble getting along in a society that isn’t designed for them, for whatever reason, is usually seen as good and moral.  We would consider it bad to deny pregnant women adequate folate on purpose, because they should be willing to accept their child with or without spina bidifa, because it’s just who they are and it’s all the same.

If someone’s situation leads to them needing extra support and makes aspects of life more challenging for them, we’re supposed to want to help them, and want to prevent others from needing the same.

In the early 2000s, this is why all the therapists and experts carefully taught us to say that someone was “a person with autism” to separate the person from the disability.  Valuable person; needing support.

Now, it has reversed and become their identity, inexplicably.  (Although I think, quite purposefully…masterful propaganda, indeed.)

The fury over autism alone doesn’t make any sense at all.

Vaccine Injury is NOT Neurodiversity

Of course, “autism” as the mainstream discusses it, and “autism” as vaccine injury are not the same thing anyway!

Some people are born with different brain function, that causes them to relate to the world in a unique way.  That’s great.  I believe that that is true for several people, particularly adults who are leading relatively independent lives and can participate in this discussion.

But that is not everyone’s reality.

Some children were born healthy, and were developing typically.  They showed no signs of being “different” in any way.  Until they were given certain vaccines…and then, parents report, they changed overnight.  They stopped making eye contact, they stated screaming in a high-pitched voice, they banged their heads, they stopped speaking, they stopped walking.

This isn’t autism.  It’s not the autism that people are born with, that causes different but valid functioning.  This is neurological injury.  This was caused by the doctors, and caused by the vaccines.

Some people, following vaccines, develop chronic pain.  Some develop several new food allergies, or environmental allergies.  Some don’t lose speech, but their speech becomes unintelligible.  Some develop autoimmune conditions.  There are many, many different forms of vaccine injury.

Vaccine injury doesn’t just happen to babies.  It can happen to toddlers, to older children, to teens, to adults.  I personally know several people who were injured by vaccines, and at different ages.  None of them have autism.

When we try to pretend that neurodiversity autism is the same as vaccine injury, we erase the voices of all of those families who are struggling with health conditions that are directly related to vaccines.  THEY EXIST.  THEY DESERVE TO BE HEARD.  And yes, I am shouting that.  Because I’m sick and tired of their voices being erased because it’s not convenient for some people.

An Even More Sinister Outcome…

This rhetoric has done what all the science and “hate those stupid anti-vaxxers” propaganda couldn’t: stopped some people from actually questioning vaccines at all.

If someone who is unfamiliar with the entire discussion asks a question about vaccines, and they’re met with fury and are told that only those who hate autistic people would even ask, and that they need to stop being a bigot, then two things will happen.

First, the social shame heaped upon them will make them stop discussing the topic immediately.  Second, the utter distraction from the actual issue will confuse them.  They’re less likely to ever question vaccines again, and certainly won’t bring them up in public — unless they ever find a sympathetic ear.

That’s what they wanted.

They will do anything to get people to stop asking questions about vaccines.  Even if doing so causes harm to many people physically, emotionally, and socially.  They don’t care.

It is entirely reasonable to ask, “What does this vaccine do?  How does it work?  Are there any side effects to it?  Are there any situations in which it could be dangerous for me or my child?”  Those are questions that intelligent, thinking people should ask about anything before accepting it.

They want us to ask more questions about using ginger root or lavender essential oil (two extremely safe natural remedies with a long history of use and almost no side effects) than they do about vaccines.

Really think about that.

Does this make any sense?  Of course not.  This is all a warped worldview, intended to make us do what we’re told.  Stop thinking for ourselves.  Just don’t ask any questions….

I won’t be silenced and I won’t allow families who are dealing with vaccine injury to be silenced, either.  Their injuries are not neurodiverse autism.  And their efforts to support and heal their children are not the “child abuse” that some of these people have suggested that it is.

(If you haven’t run across that yet, yes.  Some people legitimately argue that vaccine injury doesn’t exist, that these children were born with severe physical/neurological disability they call “autism,” and that the parents are abusing their children by trying to help them get better and restore normal functioning.  This is a beyond bizarre way of thinking, but people do.)

Wanting to prevent something that negatively affects someone’s functioning is good and right.  Wanting to offer someone support to restore normal functioning is loving.  Listening to the child’s own communication, where possible (some aren’t able) and helping them in the way that they request is important.

Vaccine injury is not going to stop.  Not as long as we keep adding more and more vaccines to the schedule and keep trying to pass more laws to force people to accept them.  But “the people” aren’t going to put up with this.  We are going to keep speaking out, keep sharing stories, keep fighting for everyone to know the truth.

If you or your child was injured by a vaccine, please share your story in the comments.  Anyone who is commenting just to attack these families or who is perpetuating the anti-vaccine-injured hate will be deleted.

Has vaccine injury happened to you?  Please share your story!