Anti-Vaxxers are Bringing Back Disease! …or are they? |
AD 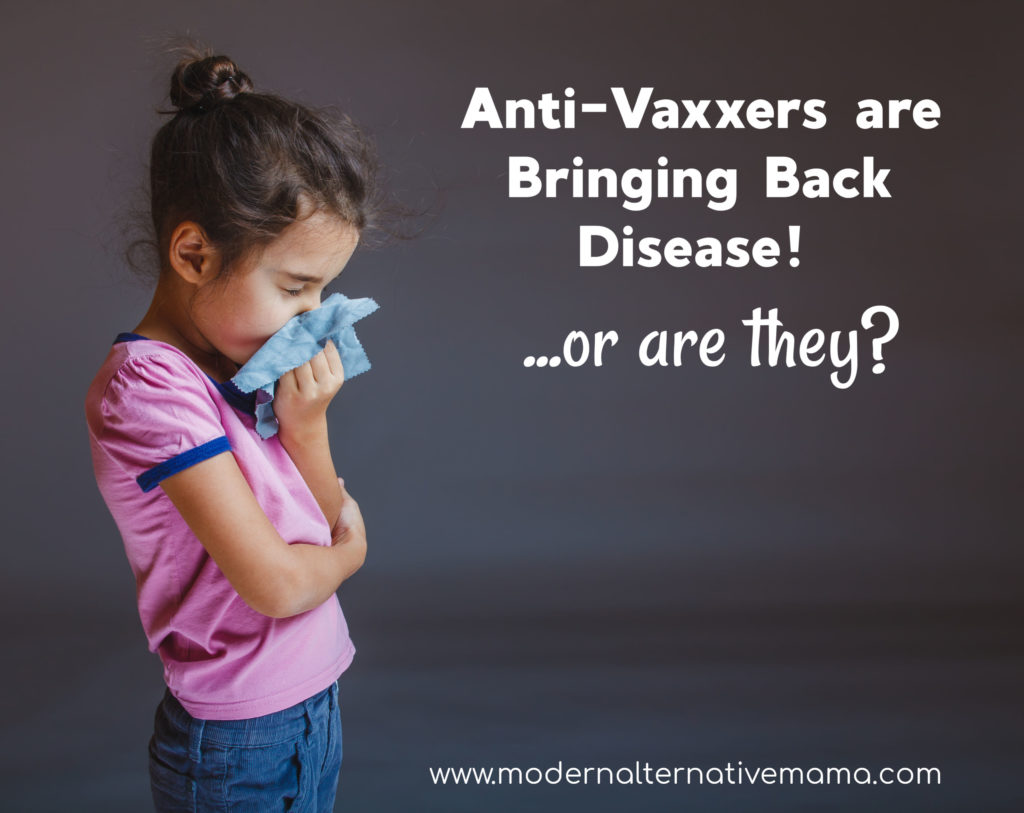 Anti-Vaxxers are Bringing Back Disease! …or are they?

It’s all over the media and Facebook — “Anti-vaxxers are bringing back disease!”  As soon as any child gets a “vaccine preventable” illness, an unvaccinated child is immediately blamed.  Even if no one has any idea where the child got the illness, and no unvaccinated children in the area are known to be sick.

This leads to angry, viral social media posts, and not-so-respectful chiding from mainstream media to “get vaccinated!”  All those darn anti-vaxxers…bringing back long-eradicated, scary disease!

But…is this what’s really happening?  Or are anti-vaxxers just a scapegoat for failing vaccines?

Anti-Vaxxers are Bringing Back Disease! …or are they?

The other day, I ran across a very interesting set of data, courtesy of Blue Cross Blue Shield.  It shed some light on this oh-so-controversial topic.

So, are vaccine rates falling?  Are fewer people vaccinating today than 5 or 10 years ago?

Here’s what’s really happening.  A greater number of people are opting out on purpose.  The number of parents who said they are refusing to vaccinate rose from 2.5% in 2010 to 4.2% in 2013 (and I assume it is continuing to rise).

However, the overall vaccine coverage rates are rising.  That’s because the greatest reason why parents don’t vaccinate is because they miss appointments.  Maybe they don’t have health insurance, or don’t have access to care, or can’t take time off work to take their children to the doctor.  These are parents who would vaccinate, if they could.

That’s an 11% increase in vaccination rates in just three years.

The documented reason for “under-vaccination” (people who have done some, but not all, vaccines) was missed appointments 62% of the time, and purposely avoiding particular vaccines just 6% of the time.

Completion rates for vaccines individually ranged from 82% – 91%, and again, these numbers were higher in the 2013 birth cohort vs. the 2010 birth cohort.

Now, if we try to look even further back…what do we find?

Essentially, in the last 10 years, full-coverage rates have almost doubled.

What Do We Know From This?

Most families are vaccinating.  And among the families who want to vaccinate but have struggled to have access, for whatever reason, more of them are vaccinating today than ever.

If a group of people is responsible for “bringing disease back,” it’s extremely unlikely to be the conscious objectors.  However, since overall coverage rates are rising, it’s very unlikely that “lower vaccine coverage” has anything to do with it at all.

The media — and most doctors — are purposely reporting on the tiny number of people that are opting out on purpose, and completely ignoring the big picture of vaccine coverage rates expanding massively — because it doesn’t fit the narrative.  They want to scare you into vaccinating, and they want you to be angry with all those “irresponsible anti-vaxxers.”

(Notice the media never engages in rudeness or name-calling towards those who haven’t vaccinated for any reason other than by conscious, researched choice, even though, by their logic, they place the population at just as much risk.)

Now, the obvious response to this is, “It’s because unvaccinated people tend to cluster together!  So they’re still responsible for outbreaks!”

Let’s take a look at that idea.

Many of the recent mumps outbreaks occurred on college campuses, and most of the people were fully vaccinated.  The CDC even notes that vaccine failure was a major reason for the mumps outbreaks (source).

In most of the measles outbreaks, the “index patient” (first person to get it) was unknown, or had an unknown vaccination history.  It was almost always an adult who had recently traveled overseas.  Most of the cases did occur in unvaccinated people.  No permanent disability or deaths have been reported in the US in more than 20 years. (source)

As a side note on measles, while it’s highly contagious, it can’t be spread until symptom onset — flu-like symptoms.  So if people stay home when they aren’t feeling well, it’s fairly easy to contain.  (The media often quotes “it’s contagious before the rash is present!”  True, but only because the rash doesn’t present until after a few days of flu-like symptoms.  Perfectly healthy people are not walking around spreading measles.)

Pertussis is interesting.  The vaccine was available in the 1920s, but wasn’t more widely used until the 1940s.  There’s no clear point when it became used more commonly.  Cases dropped sharply in 1960, then began to climb again in 1996, and jumped up sharply in 2004.  These, of course, are only the reported cases — it’s assumed there are many more.  (source)

The majority of people with pertussis had been partially or fully vaccinated against it.  (50% vaccinated; 40% unknown; 10% unvaccinated.)  (source)  Some studies show that this is because vaccinated people can be asymptomatic carriers (source, source, source).

Essentially…the majority of outbreaks (but not all) cannot be tied to unvaccinated communities.  It did happen with a couple of the measles outbreaks, but primarily — that’s not what’s happening.

Do We Just Need More Vaccines?!

The more we vaccinate, the more disease is running around.  So we could blame rising disease rates on vaccinating more.  Or, we could say that vaccines just aren’t working.  But we certainly cannot say that “lack of vaccination” is causing it.  There’s absolutely no high-quality evidence to suggest that that is true.

In the mean time, however, vaccines have been linked to…

There’s a lot more than that, but this topic isn’t what the post is about.  I’ll expand on some of these in future posts.

Essentially?  This is not a black and white topic.  We absolutely cannot conclude, from the data at hand, the vaccines are unilaterally good, and that lack of vaccines is what’s bringing diseases back.

All of the inflammatory statements about “anti-vaxxers” are just that — inflammatory, untrue statements.  These are propaganda-laden pieces, intended to scare parents into compliance at any cost.  They don’t give the full picture of what’s happening in the US (on purpose), and they seek to violate informed consent, particularly when coming from medical professionals.

Sadly, scientific literacy seems to be quite low these days.  I have seen posts from people blaming roseola, strep throat, scarlet fever, hand foot and mouth, and AFM on “anti-vaxxers,” even though we have never had vaccines for these diseases.  (Scarily, in a couple cases, a doctor said it.)

Next time you hear “It’s all because of anti-vaxxers!” pull out the data, and set them straight!

Do you think anti-vaxxers are bringing back disease?