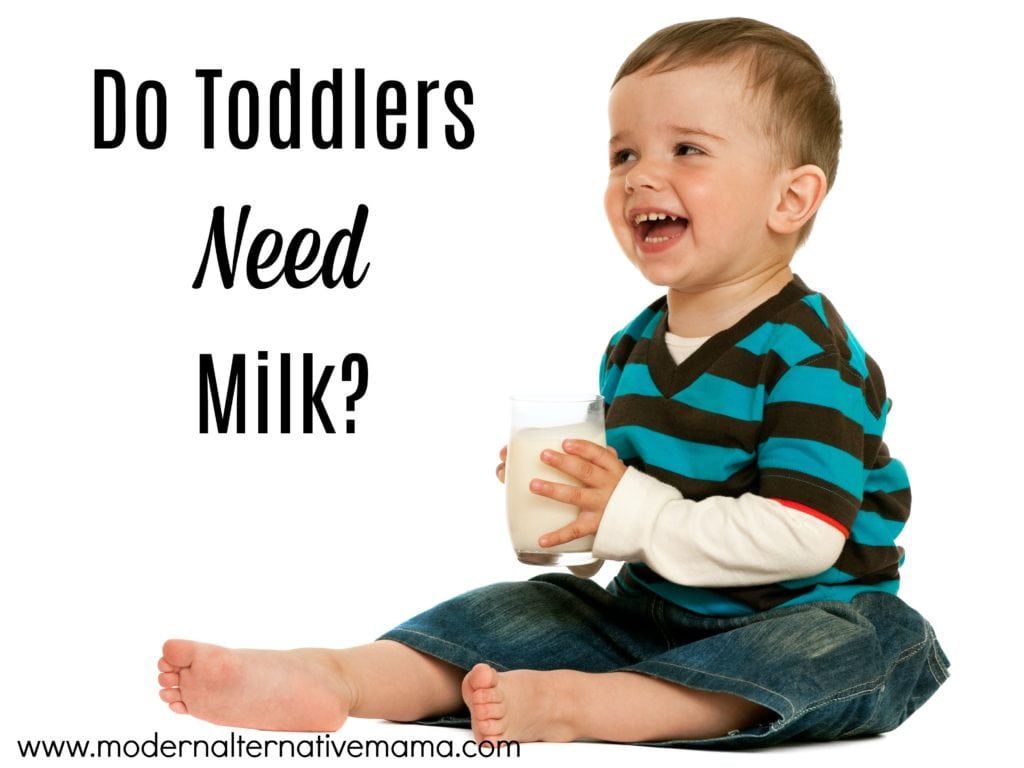 In parenting groups across the internet, the question abounds: “When should I transition my child to whole milk?  How much should s/he have?  What kind of milk?”

There is an obsession, it seems, with how much (non-human) milk a toddler needs, and the assumption that, in fact, milk should make up a significant portion of a toddler’s diet.  Most people offer toddlers 2 – 3 cups of milk per day, and some, far more.

It’s time to take a closer look at this.

There is an assumption that, at around a year old, babies (now toddlers!) should transition away from bottle feeding or breastfeeding, and onto whole cow’s milk.  Most parents consider “milk” to be a major staple in their child’s diet for at least the second, if not third, year.  And frankly, many insist on a cup of milk with meals throughout childhood.

Back in the early 1900s, most mothers breastfed their babies.  When they couldn’t, they began to feed their infants cow’s milk instead.  Over a few decades, this elevated cow’s milk to the status of a “special food,” similar to breastmilk.

Both cow’s milk and breastfeeding fell in and out of favor over time.  Cow’s milk used to be introduced very early; doctors later said was better to wait until after six months, then until after a year (which is today’s recommendation).

There’s still a hold-over from those century-old attitudes: cow’s milk is something special, akin to breast milk.  It’s all milk.  It’s all necessary for health.  Right?  (See more on the fascinating history.)

Well, not so much.

The truth?  Unless you are still breastfeeding, there is no reason to have milk as a significant portion of the diet past one year of age.  (If you are breastfeeding, it continues to be beneficial through the first three years, at least, although not only nutritionally.)

There is nothing special or magical about another animal’s milk.  There is no special need for a child to have moderate to large consumption of cow’s or goat’s milk in toddlerhood. But What About Protein, Fat, and Calcium?!

These are the most frequently cited reasons for consuming cow’s milk: protein, fat, and calcium.

First of all, toddlers do not need nearly as much protein as most people think they do.  And, too much protein can be harmful to still-immature kidneys.

The average toddler needs about 1 g/kg/day. (source)  A 1-year-old typically weighs about 10 kg, so they only need about 10 g of protein per day!  Further, from that same study, protein levels above 1.5 g/kg may be harmful, and that’s only about 15 g/day — so it’s not better to have more.

(Actually, a person’s protein needs slowly lower as they age.  Breastmilk is lower in protein at 12 months than 3 months.  (source))

When meeting a toddler’s protein needs, if they are not breastfeeding, these foods will work just fine.

Lots of other grains, beans, and nuts contain protein as well.  Toddlers do not need to eat much to get their protein requirements daily.  An egg at breakfast, a snack of hummus, and brown rice for dinner will meet their needs.  Or, one small portion of meat.

All of these animal foods are rich in healthy fats, too.  Toddlers can get what they need from butter, yogurt, beef, chicken, avocado, coconut milk, olive oil, etc.  Do not limit fat in a toddler’s diet!  It is essential for brain development.

What about calcium?  This is the most often-cited reason for milk in the diet.  Toddlers need about 700 mg per day.

These foods are calcium-rich:

Several other foods have lower amounts of calcium, so a varied diet can provide plenty of calcium.  And there is nothing wrong with the occasional serving of cheese or yogurt!

“Nettle infusions” means 1 oz. of nettle leaves (an herb) in a quart of water, left to steep for several hours.  It’s basically like a very strong tea.  It is naturally caffeine-free and rich in several vitamins and minerals.

One of the most important issues with is that the casein and calcium both block iron absorption.  And that’s a big deal, because many babies and kids do not get enough iron, and this can have serious impacts on their long-term development!

A 2007 study says: “… infants with iron-deficiency anemia are at risk for poorer cognitive, motor, social-emotional, and neurophysiologic development in the short- and long-term outcome.”

Low iron stores is one of the main reasons for starting solid foods/mixed feeding in the first place.  (Read When Should You Start Baby’s First Food? for more)

There are also concerns over allergies — up to 5% of children are suspect to have a milk allergy (source).  Cow’s milk is associated with chronic constipation (source).

Too much milk is also associated with more rapid growth and greater likelihood of obesity. (source)

There are others who will insist dairy in any form is incredibly terrible for your health, but these claims are generally overstated.

What Do we Do About Milk?

The truth is, milk is not a magical food.  It is not the world’s worst food, either.  Dairy, outside of allergy, is a perfectly fine food to include a varied diet.  But it shouldn’t have a major place in it.

Basically, milk is just one food option.  Have some occasionally, or don’t.  But don’t elevate milk to this special, necessary food, because it isn’t.

In a perfect world, children should continue to breastfeed for 2 – 3 years (human milk actually is special!) while eating a varied diet of other foods.  Weaning takes place slowly over several months, until food is all a child is eating.

If a child isn’t breastfed, then after a year old, there is no need for any type of milk to make up a large portion of his/her diet.  Include plenty of different fruits, veggies, meat, and whole grains too.

Do you think toddlers need milk?  Why or why not?