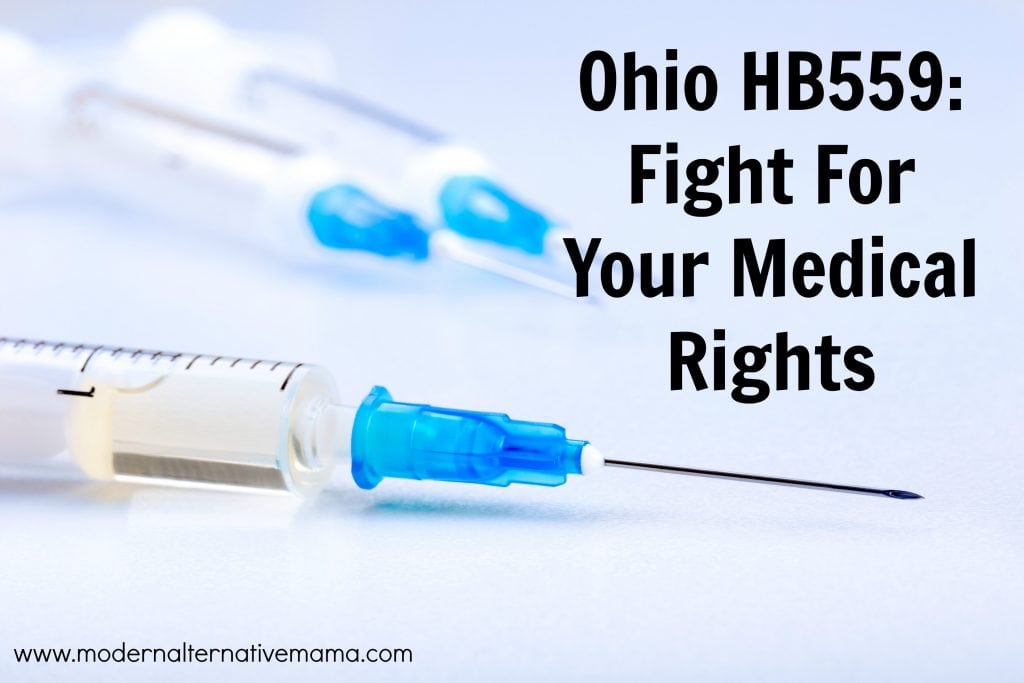 I wasn’t going to get involved…much.

There’s a fight going on in Ohio right now, surrounding HB559.  This bill is an updated version of existing law about vaccine exemptions.  The language has been changed in two important ways:

#1: It provides for a standardized form that everyone seeking exemptions must use

#2: It requires families to get a doctor to sign off on exemption forms, after a conversation on the “risks and benefits” of vaccines, before they can exercise their right to skip some/all vaccines and attend public school

We’re focusing on #2 today.  Several states have enacted similar laws over the last 5 years, and some (like California) went on to remove exemptions completely.  We will not let that happen.

Then, yesterday, when I created a post about the issue and encouraged people to get involved (on Facebook), it was removed for “violating community standards!”

Back to my objections over HB559.

Requiring a doctor’s note to exercise your rights is problematic in several ways.

#1: Doctors are Not “Authority Figures”

First and foremost, doctors are not authority figures.  They do not have any right to give families “permission” to make their own decisions.  Under ideal circumstances, families and doctors partner for health care, with doctors giving expert opinions and advice, and families ultimately making their own decisions.  It’s called informed consent.

Under this law, families effectively do need a doctor’s permission to make this decision, and it will further the already-existing imbalance of power that exists.  (Far too many people are already afraid not to take their kids to every single well visit, or to refuse/disagree with treatment options, for fear that doctors will call CPS and get their kids taken away.)

#2: The Risk/Benefit Conversation May/Will Not be Truthful

There is no requirement for what this conversation has to contain, except risks/benefits of vaccines, and “risks to the community.”  For most doctors, this will be a lecture/fearmongering, where they say things like this:

“Vaccines are safe and effective.  The science is settled.  If you do not vaccinate, your child may get horribly sick or even die of these very deadly diseases.  You are placing the entire community at risk by not vaccinating, because your child could spread illness around.  Reactions are mild and extremely rare, like one in a million.”

Unfortunately, none of this is true.  (See this for more.)  It’s not at all an accurate picture of the risks and benefits of vaccines, or of the diseases they’re designed to prevent.

Some doctors even deny that reactions are possible, and deny reactions that occur right in front of them, because they’ve been taught “vaccines can’t cause that.”  (Not to mention they call thousands upon thousands of parents liars when they report reactions.)  What if parents visit these doctors and are bullied over their decision?

There is no provision for parents to see an alternative practitioner outside of Western medicine, who may be more likely to agree with the parents’ beliefs.  Western medicine is not the only system available and this is not acceptable.

Some families may not have an existing relationship with a doctor.  Some may have doctors who do not agree with skipping vaccines who will refuse to sign the paper.  What happens if these families live in rural areas (which a good portion of Ohioans do) and cannot access a doctor who will sign?  Many will not be able to travel an hour or two into a larger area to find a doctor who will sign it.  Are they just unable to exercise their rights?

This will disproportionately affect families who are low-income or in rural areas — although these families are already at a disadvantage because they have less access to information about their rights.  Many do not know they can opt out today.

#4: Families May Be Bullied and Lied to About Exemptions

As I just mentioned, many families do not know they can opt out.  A lot have been told “these shots are required for school attendance,” with no mention of existing exemptions.  Many parents have vaccinated reluctantly, believing there is no other option.

If the laws are tightened, schools may be even more likely to deny exemptions, or to say “You have to go to a doctor to get permission for that,” which makes it seem scarier to use.

The country in general has not succeeded in scaring parents into vaccinating, so they have decided to try forcing it by making it harder to exercise their rights.

It reminds me of an old Berenstain Bear book, where the principal kept changing the rules and making them tougher and more specific in an attempt to control the students.  It didn’t work and everyone was miserable.

The CEO of the Ohio AAP has been very public in this fight.  She wants HB559 to pass, and has used her personal profile to call out “anti-vaxxers” as liars and bullies, among other things.

Naturally, the community opposing HB559 is not happy about being portrayed in such a manner.  Most (obviously, not all) have gone out of their way to be professional and respectful.  They have posted respectfully on the public AAP page about their dissension (comments are deleted and people banned) and have prepared and shared testimony at the statehouse, and have appeared in red shirts to oppose the bill.

In fact, they were present on Wednesday, 5/23, to give testimony in opposition to the bill.  Almost all the reps left when it was their turn, and several of the ones who stay actively laughed at the parents or looked bored and seemed not to be listening.  (Rep. Steven Huffman in particular was caught laughing.)  This is unacceptable behavior from government officials.

When I posted a respectful comment to the AAP’s page, urging them to reconsider this bill, examine the new science surrounding vaccines, and protect families’ rights, the entire post was deleted.

Later in the day, I shared the publicly-available email address and credentials of the AAP’s CEO, which can be found HERE.  (She, like most of the staff, is not a medical professional in any capacity.  Her background is in journalism and PR.  I felt this necessary to point out, because she has no credentials to be pushing vaccines, nor to be condescending towards those who oppose them.  Most were under the assumption that if she was representing the AAP, she must be a doctor.)

This post was later removed for “violating Facebook’s Community Standards.”

There was nothing in that post that should have required removal.  I stated her name, her credentials, and her publicly-available email address, as well as asking people to contact her respectfully to share studies and argue our case.  (I asked people not to be rude, as that does not help.)

This is absolutely ridiculous.

She is the head of a professional organization that is leading the fight against our rights.  Her business email address is the only thing that was shared.  She is politically active and this is a serious issue for many of us.  We have the right to share what is happening in order to fight for our rights.

But they silenced me.

Fortunately, I have a large community…so I will not be silenced.  All they’ve done is motivate me to use that community to fight against this ridiculous bill and the unprofessional organization pushing it.  If the AAP were really about health and families, they wouldn’t be deleting posts and comments that opposed them, and they wouldn’t be trying to shut down opposition.  This is about our rights.

Where We Go From Here

It’s time to take action, whether or not you are in Ohio.  If you’ve had enough of the mainstream medical system bullying families, attempting to take their rights, acting like they are an authority figure in families’ lives, it’s time to stand up and fight back.

If you’re in Ohio…

Step 1: Find your state representative and email him/her (politely!) to oppose this bill.  You can find your reps HERE.  Give specific reasons why you oppose it, and share a personal story if vaccines have affected you or your family.

Step 2: Write to the Ohio AAP (HERE) staff and board of directors, sharing recent studies with them, your personal story (if you have one), and urging them to take this seriously and oppose this bill.

Step 3: Connect with Ohio Advocates for Medical Freedom, and keep track of any new action alerts.  (Here’s their Facebook page.)

If you’re NOT in Ohio…

Step 1: Share this post.  Make it go viral across social media, so that everyone sees what we’re up against here.

Step 2: Contact the Ohio AAP to (respectfully) express your displeasure at this bill and the way they are treating Ohio families, and urge them to withdraw the bill.

Step 3: Check your own state’s current bills, to see if any action is required in your area.

This is not about vaccines.  It is about our rights to make our own medical decisions, without fear of retribution from the medical community, and without fear that our children cannot access public education.

Politicians and doctors (at least, some doctors and organizations) have been slowly creeping on families’ rights for several years now…and it’s time to say, NO MORE.

Get involved now.  Fight for your rights.  Organize as a community and show the government what matters!

Have you been fighting HB559?  Did you know about it?