When Can My Baby Have Water? - Modern Alternative Mama
AD 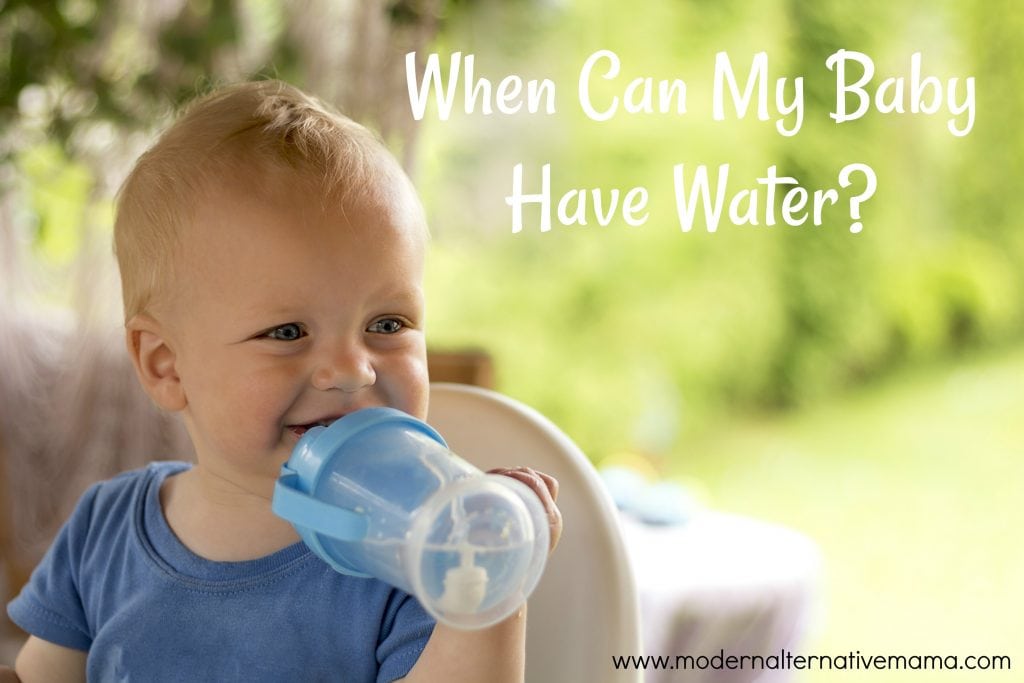 When Can My Baby Have Water?

There’s been a whole lot of confusion over babies and water the last few years.

“Back in the day,” (when our parents were growing up), most babies were given a few ounces of water per day, along with their breastmilk or formula.  These days, the pendulum has swung in the other direction, and many moms freak out about the idea of any baby having water at all!

So who’s right?  Should babies get water?  And if so, when and why?

Why Are We Worried About Water?

It’s just water, right?  What’s to be so worried about?

In older people, obviously, nothing.  Water is a requirement for all living things, and kids and adults should drink as much as they are thirsty for.  While way too much water can have negative effects, most people won’t drink that much voluntarily.  We’ll talk about issues with overconsumption of water in adults another time.

Young babies have immature kidneys and in general, tiny bodies.  They’re very fragile and something that would be fine for an older person may be overwhelming or dangerous for a baby.

A young baby’s diet — and all of their needs — should come from breast milk or properly-made formula.  It is both their food and water.  They do not need anything else to meet their needs, and should be given nothing else by mouth unless absolutely required (like medication).

A baby’s kidneys are immature, and the water-electrolyte balance is very important.  If they get too much water, it can dilute the amount of sodium in their bodies, which can lead to muscle abnormalities (including heart problems), and can eventually cause coma and death.  Babies have died from water intoxication before.

If a baby gets too much sodium (from straight cow’s milk, or improperly diluted formula), then he can become dehydrated, and this can also cause serious issues.  This is why cow’s milk as a major part of the diet is not recommended for babies under a year — it has approximately twice the sodium levels of breastmilk or formula.

(However, foods made from cow’s milk as a small part of the diet during weaning are just fine, unless there is a specific allergy.)

How Does Water Intoxication Happen?

This is a real thing, and it’s important to take it seriously.  But not too seriously…let me explain.

Babies have been hospitalized or died from water intoxication.  In almost every case, it was because the parents were intentionally diluting breastmilk or formula to “make it stretch” (usually due to budget concerns).  They did not realize that this, in the long run, is very dangerous.

However, it’s not very common.  According to one study, fewer than 8 babies per year actually develop water intoxication, and almost always from being repeatedly given water or diluted formula instead of normal formula. (Another study shows the same.)

Additionally, the amount of water that a baby consumes has to exceed the amount that his/her kidneys can excrete in order for sodium levels to drop to dangerous levels (study).

All of these issues are connected to “excessive water intake.”  One source recommends no more than 2 oz. of supplemental water per day from 4 – 6 months, if baby is still exclusively breast or formula-fed.

Another source shows that babies who were taken to the hospital for water intoxication were given between 24 and 64 oz. of water per day before they developed symptoms — all recovered fine.

The bottom line here is:

Don’t use water if you don’t have to, but don’t flip out if baby gets a little.  Truthfully, the much greater risk is baby swallowing water from a bath tub or swimming pool — this can be contaminated, and can also lead to water intoxication.

When Can My Baby Have Water?

Once baby is eating solid foods, the guidelines change.

At this point, baby is no longer getting all their nutrients (and liquids) from a single source.  They are getting it from a varied diet, just like adults.

A baby who is eating solids can be offered a cup of water and allowed to drink freely.  Some sources say 4 – 8 oz. per day; others don’t really give a limit.

There have been no reports of babies who could self-feed with a cup ending up with water intoxication.  A baby will not freely choose to drink so much water in such a short period of time that they will harm themselves.  If a baby does seem to be drinking “an excessive amount,” it may mean there is an underlying health concern that needs to be addressed with their doctor.  (It could also mean they are spitting it out or playing with it, which is normal baby behavior!)

A lot of people get worried because they don’t really have all the information.

Many people have become overly worried about a sip of water here or there for babies, even older babies who are eating food, because they have heard the scary stories about water intoxication.

Water intoxication is real, but it generally affects very young babies who are fed high amounts of water in place of breastmilk or formula.  It’s not happening because a baby who is feeding himself breakfast took a few sips from his cup.  It’s not even possible to happen in that second scenario!

Stick to breastmilk or formula only for babies under 4 months.  The only exception is if a formula-fed baby is sick and a doctor recommends using a rehydration solution temporarily instead (like Pedialyte).  This type of solution contains both water and sodium to prevent either water intoxication or dehydration.  It also may be easier on an upset tummy.

Once a baby can eat food and control his own water intake, don’t worry about it.  Baby will not drink excessively and cause himself harm, just like he won’t eat excessively.

When do you let your baby have water?