What the Health? What You Need to Know (Part I) |
AD 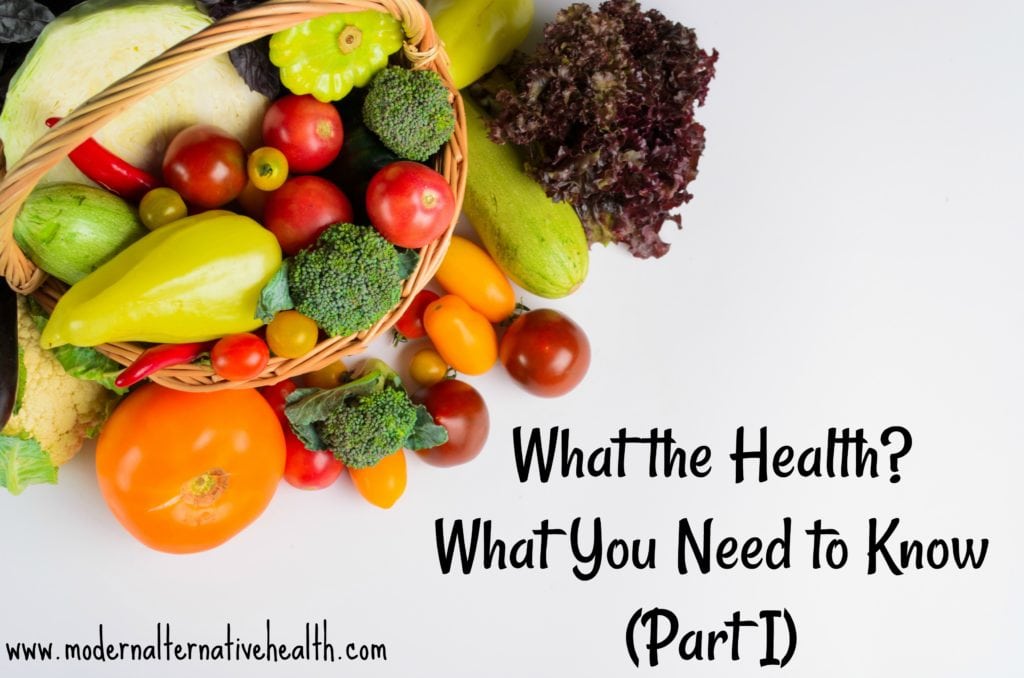 What the Health? What You Need to Know (Part I)

I didn’t want to do this, but the furor over “What the Health” just will not die.  There are the proponents of the movie, who feel vindicated that it’s out there and sharing ‘truth’ (in their opinion) and are loudly proclaiming everyone should watch it and make changes immediately.  And then there are those who are against it, and see it as one-size-fits-all diet propaganda.

Of course, there are also those who are simply confused.  Are they telling the truth?  Is a plant-based diet the only way?  Are meat eaters slowly killing themselves with cancer and diabetes, and will that continue if they don’t make those immediate changes?

So, a response is in order.

I’ve read many, many threads where people hotly debated this documentary.  I have come to see that all those who are in favor of the movie flat-out refuse to believe any critiques at all.  They always point to “conflicts of interest” — “That person promotes the paleo diet!”  “That person works for the dairy industry!” etc.

Basically…in the end, anyone who is against the movie must have an ulterior motive, not simply a different opinion or interpretation of the data.  Therefore, they dismiss any criticism out of hand.  Some have even said that people who are truly healthy/alternative would believe the documentary, and that anyone who doesn’t is just addicted to cheese/meat.

Look, this is a shady perspective.  If you believe that everyone who disagrees with you is doing so because they’re being paid…or because they’re emotionally hung up, we are not having a scientific debate.  That type of “rationale” borders on religion, not science.  If you’re actually an open-minded person, you’ll be willing to look at both sides of the information, and believe that people can intellectually disagree on the issue.

I’m sure this won’t convince the die-hard vegan-lovers, and that’s okay.  But for those on the fence…that’s what we’re going for here.  A look at the science.  This isn’t about “loving cheese,” but about what the evidence actually says.

By the way, I love plant-based.  Most of what I eat is plant-based.  I’m an omnivore who does eat some meat/cheese, but feel best when I eat primarily plants.  So it’s definitely not about my justifying eating an “unhealthy” or animal-heavy diet.  This still won’t convince some, but I thought I’d throw that out there.

What the Health? What You Need to Know

The documentary came out in March of 2017.  It was produced by Joaquin Phoenix, and “stars” Kip Anderson (who are both vegan — yes, that’s relevant here).  The film’s purpose, according to their website, is to “… exposes the collusion and corruption in government and big business that is costing us trillions of healthcare dollars, and keeping us sick.”

Okay.  Sounds noble.  If there’s information out there on healthy eating that we’re not getting, we should have access to that information and be aware of its implications.

But, what studies are they using?  Others have addressed the claims made in the film itself (spoken) a bit more directly, so I want to look at the nitty-gritty in the research.  They posted all of the studies HERE, so I’ll be going off that.

I don’t dispute that diabetes is a major problem, that millions of people have it, and that a lot of health care dollars are spent on it.

It’s worth noting, though, that processed meats are not the only exposure most people have with nitrates.  They are also exposed via drinking water in farming areas (pesticides/synthetic fertilizers) as well as on conventionally produced vegetables.  (Study.)  This is a complex issue, and meat alone is not to blame.

I also don’t dispute that the American Cancer Society gives terrible diet advice, and not just in the area of recommending processed meats.  They also recommend cereals with high amounts of sugar and food dyes.  So, I just don’t take anything they say very seriously.  That is incredibly unfortunate.

I don’t dispute that many people get and die from cancer, and that many people are overweight or obese, nor that most of this is preventable and is happening even to children.  I want to see this change! But then, we get into some…interesting territory.  Diabetes isn’t caused by sugar, but rather by meat consumption.  That’s a pretty bold claim.

Two of the four pieces of evidence are simply statements by doctors or organizations.  We can find plenty of doctors and organizations who would make statements to the contrary, so we’ll set that aside for now.

They also use two studies.  Meat Consumption as a Risk Factor for Type 2 Diabetes and Impaired Mitochondrial Activity in the Insulin-Resistant Offspring of Patients with Type 2 Diabetes.  The first study of a large group from a single community in CA noted that people were between 27 and 100% more likely to develop diabetes in their lifetime if they ate meat (red, poultry, or fish) at all, and the more frequently they consumed meat, the more likely they were to develop diabetes.

The second study has nothing to do with meat consumption and diabetes at all.  It simply notes that fat dysregulation, possibly due to mitochondrial dysfunction, was more likely to be present in those with than without diabetes (specifically, insulin resistance).  So this tells us that there’s possibly more going on…an underlying mitochondrial issue?  Nothing in this study says or indicates that this was caused or exacerbated by fat or meat consumption, although it seems the filmmakers are trying to imply such a correlation.

But this isn’t the whole story.

A 2012 study looks at several potential causes of diabetes — it isn’t a simple “sugar” or “fat” question.  Also, a 2015 study shows that soybean oil is a greater diabetes risk than either coconut oil or fructose.  (That’s important because it wasn’t just the fat that was an issue; it was the type of fat.)

A 2001 study shows that diets that are very high in fat and low-carb affect insulin and glucose levels in the body — but low-fat, high-carb and balanced diets do not.  There are several more studies that show that high-fat diets can increase a person’s insulin resistance and risk of developing diabetes.

On the other hand, a 2007 study shows that a paleo-type diet can also improve glucose sensitivity (i.e. reduce resistance).  A 2009 study comes to the same conclusion.

We’ve got studies on both sides of the fence here…but, with one interesting note.

Some of the paleo studies that were done were using lean meats and nuts.  This is in line with some of the non-paleo studies, actually — consuming plant-based foods high in linoleic acid (an omega-6 fatty acid) and lean meats helped in avoiding diabetes.

It doesn’t appear that the issue is that all meat and all fat are bad; but that way too much fat is bad for some people.  (Some of the diets in the experiments were 80 – 90% fat, which is much higher than what the average person would/should consume.  Moderate diets, with 35 – 45% fat, did not have the same issues.)

It’s also worth noting the differences in the fat profiles between confinement animals vs. pasture-based animals.  A 2016 study looked at grass-fed cattle in Argentina, including their nutritional differences (for human consumption) and the sustainability of raising cattle that way.  Grass-fed beef also has a lower saturated fat content and lower total fat content (source).  It’s worth considering that a lot of the negative studies about consuming meat were likely done using confinement meat…and that with the nutritional profiles of the meat shifted, the effects on human health shifted, too.

What the Health goes on to state that eating a higher-carb diet is actually healthier for those with diabetes.  They provide two studies as evidence: Dietary intake of carbohydrates and risk of type 2 diabetes: the European Prospective Investigation into Cancer-Norfolk study, and Effect of a diet and exercise intervention on oxidative stress, inflammation and monocyte adhesion in diabetic men.  The first is sort of a preliminary study; it concludes there is an inverse association between fructose and glucose consumption and diabetes risk, but acknowledges it doesn’t know if this is causal or because of the changes in fat consumption.  The second study looks at how diet changes and exercise (together) improved the health of people who were already diabetic…so isn’t all that relevant to those looking to prevent diabetes.

The next point is about processed meat increasing the risk of diabetes.  We know, again, the processed meats are unhealthy and increase inflammation in the body.  It’s no surprise that eating these on a daily basis would increase diabetes risk.  But, not all meat qualifies as “processed,” so this claim can’t be applied to eating uncured (i.e. plain chicken) meats.

This is an interesting area, because the movie (generally) agrees with the mainstream here.  Too many animal products and too much fat increases your risk of cardiovascular disease.  This is what the USDA has been saying for over 40 years, and we’ve only seen the rates increase.  So, what gives?

The movie alleges that smoking, alcohol consumption, sugar, and meat all play a role in heart disease.  No argument there.  The studies they offer as evidence are generic, dealing with all these issues in combination.

They go on to make this claim: “WITHIN MINUTES OF EATING DEAD MEAT BACTERIA TOXINS, THE BODY GETS A BURST OF INFLAMMATION, STIFFENING OR PARALYZING THE ARTERIES.”

One bit of evidence is a video from a doctor speaking on the issue, and the other is an in vitro study (not a live-human diet study).  The evidence isn’t strong enough to support such a claim.

They claim that dementia is caused by saturated fats, linking to a single study (which shows that the blood-brain barrier breaks down with a high consumption of saturated and trans fats).  But, other studies show that coconut oil (a saturated fat) is protective against dementia, so this isn’t a simple issue.

The next claim is that the highest source of sodium in food comes from chicken.  This was true only for adults ages 20 – 50, and chicken made up a total of 7.3% of the total amount of sodium.  This is hardly alarming.  (Their study.)  It is true that conventionally-raised chicken is “enhanced” with a saline solution, and is an argument against eating too much processed chicken products or conventionally raised meat, but isn’t an argument against ever eating any chicken.  Basically — don’t eat processed foods, they’re high in sodium!  We all knew that.

It goes on to claim that chemicals formed in meat cooked at high temperatures (like grilling) increase the risk of cancer.  This is true, and we have covered it before.  There are safer ways to cook meat; this is an argument against specific cooking methods, and not meat itself.

The documentary goes on…there is a lot more to cover!  Check out part II in a few days!

Have you watched What the Health?  How do you feel?