What a Natural Pregnancy Looks Like: Should You Get an Ultrasound? |
AD 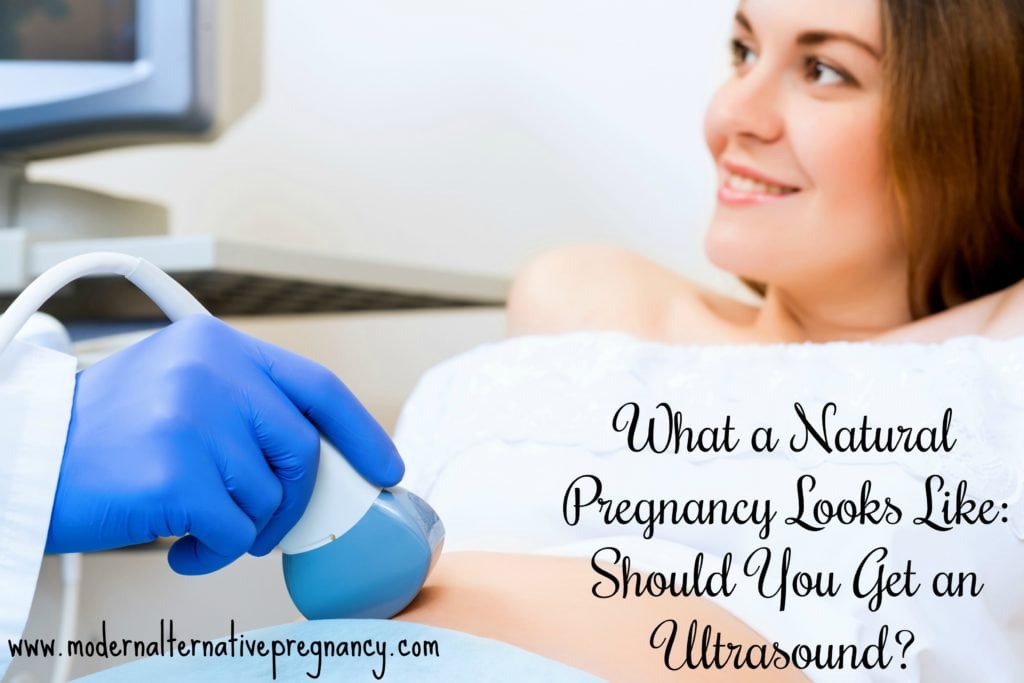 What a Natural Pregnancy Looks Like: Should You Get an Ultrasound?

Time to dive into one of the most controversial topics surrounding a natural pregnancy: ultrasounds!

I think we can all agree that unnecessary ultrasounds are something to avoid.  Some moms like to “peek” at baby often just for fun (which even ACOG doesn’t recommend, by the way).  Unless you’re high risk, you really don’t need a lot of ultrasounds.

But how many is too many…and do you really need any at all?

Many moms will argue tirelessly that you do, in fact, need one or two ultrasounds.  One is a dating ultrasound, usually performed around 8 weeks.  It checks to make sure that your due date is accurate and that all is going as it should.

The second is the big 20-week ultrasound, which checks to make sure your baby is growing well, doesn’t have any abnormalities, and that your placenta is in a good place.

Other women will argue you don’t need any ultrasounds, as long as mom and baby are doing well and there are no concerning symptoms.

And still other moms will argue there is nothing wrong with ultrasounds at all, and any number of them is fine.  Some will passionately defend the necessity of having had weekly (or even more frequent!) ultrasounds in their own cases and how it saved their babies.  I wouldn’t call this perspective a “natural mama” one, at all, although it may apply to very high-risk moms.  We’re going to set this aside, assume we’re talking about low-risk moms, and that minimal to no ultrasounds are what’s necessary.

What a Natural Pregnancy Looks Like: Should You Get an Ultrasound?

Those who argue in favor of ultrasounds will tell you there are no risks to them.  (I hate that.  There is potential risk to anything.)  They will also name off a number of other benefits.

Many women feel like they need to know if baby is healthy (or not).  They believe that if something were wrong, they could possibly do something prenatally to help — i.e. changing to high-risk care, planning an early c-section, prenatal surgery, etc.  They also believe it’s best to know before birth to expect a problem, so they can plan to have a high-risk team in place, be in a hospital with a high-level NICU, prepare themeselves mentally, etc.

#2) Checking on the Placenta

This matters for two reasons.  First, to make sure the placenta is not too low (placenta previa), because if it partially or fully covers your cervix, a vaginal birth would be dangerous.  There is also the rarer placenta accreta, when the placenta is buried too deep into the uterine lining and could cause hemorrhage and other serious issues.

Second, if you have had a previous c-section, it’s important to know if the placenta is on/near your scar, as this increases risk, too.  This matters more if you are attempting a VBAC than a repeat c-section, and many midwives will not attend a VBAC mom unless she has an ultrasound for this reason.

If there is reason to suspect multiples, many women will want an ultrasound to confirm.  And, if they are carrying twins or more, most doctors and midwives will request additional ultrasounds (especially in the case of mono/mono twins) to make sure they are both growing well and that TTTS (twin-to-twin transfusion syndrome) does not occur.

Although this is a less-common and non-medical reason, some women feel they can better bond with their babies if they can “see” them before birth.

The first reason is the most commonly cited reason for having an ultrasound.  Many women argue that even if you are symptom-free and there is no indication of an issue, there is always the possibility that something is wrong, and that you cannot know without getting the ultrasound.  They believe that this benefit outweighs any potential risks of having an ultrasound.

What Does Science Say?

Since obstetrics is unfortunately a very non-evidence-based field, it’s important to look beyond what’s “commonly done” and really dive into the evidence.

One key question I want to answer is, do routine ultrasounds improve overall pregnancy outcomes?

A large-scale (but not new) study, performed in the early 90s, shows that ultrasounds did not improve pregnancy outcomes.  Over 15,000 women were followed and randomly assigned to have either two ultrasounds (routine), or no ultrasounds unless pregnancy symptoms warranted one.  Over half of the “no ultrasound” group actually didn’t have a single scan.  The groups didn’t differ on length of gestation, number of babies with abnormalities, infant mortality, or other key outcomes.

A much more recent study concluded the same thing (meta-analysis of over 37,000 women).  Basically, routine ultrasounds do improve the detection of multiple pregnancies or problems, but do not result in less need for medical assistance or less morbidity or mortality in mom or baby.  In other words, they do what they are supposed to — find issues.  But they don’t actually improve long-term outcomes.

What about the overall risks of ultrasounds?

In one study, they mention the risks of “heating” and possibly hurting the baby, and recommend caution in the use of first trimester dating ultrasounds (i.e. don’t perform them unless truly necessary).

One study recommends very cautious use of ultrasounds, specifically recommending against ultrasounds for non-medical use (i.e. fun pictures, gender determination), and also against doppler use in the first trimester.

One study concluded that additional ultrasounds at or past 24 weeks’ gestation to “check on baby” did not improve outcomes at all, and unless there are concerning symptoms, should not be used.

A handful of studies over the last 15 years point to a lack of scientific evidence for ultrasound safety.  It’s assumed to be safe because there are no obvious, stand-out effects, but ultrasounds have been potentially linked to dyslexic, growth restriction, and more.  The bottom line is, we can’t be entirely sure what risks ultrasounds pose because the science hasn’t been properly done.

There is a statistically significant (albeit weak) association between non-right-handedness and ultrasound exposure.  Some 8 – 10% of the population is naturally left-handed, but an increase suggestions that something in the brain has been changed.  Researchers don’t know exactly why this is happening or what it might mean.

So.  What do we take from this?

Do We Use Ultrasounds, or Not?

There is honestly not a lot of strong scientific evidence either way.

There is no evidence that routine ultrasounds improve outcomes in low-risk pregnancies.  Not having detected a serious issue prior to birth did not lead to more deaths or more hospital stays in two large-scale studies.

On the flip side, there is not a lot of data that shows that ultrasounds are safe…or not.  There are some concerns floating around about the potential risks, but not a lot of good quality studies have been done to assess these risks.

There does seem to be some benefit to using ultrasound in high-risk cases, or if a woman is having concerning symptoms.  That is, if a woman is very overweight, has diabetes, has a history of genetic disorders, has suspected multiples, etc.

No one can tell you if you should get an ultrasound, or not.  It may give you peace of mind or help you to feel prepared.  It may be necessary if you are high risk.

If you do choose an ultrasound, keep these things in mind.

Newer machines are much higher intensity than older machines, because it allows them to see more detail.  If possible, ask your clinician to use the lowest possible intensity.

Risk is increased when the clinician keeps the wand in the same place for too long.  Keeping the wand moving around and not concentrating too heavily in any one area is important.  This is especially important around the baby’s bones and brain.

In both length of time, and number of sessions.  Don’t get more ultrasounds than you need.  Don’t do “vanity” ultrasounds because you just want to see your baby.  Keep the ultrasound brief, just long enough to see what needs to be seen.

Not too Early or Late

Risk seems to be increased (for little to no benefit) when ultrasounds are performed very early (before 12 weeks) or very late (after 24 weeks).  If you opt for an ultrasound, 18 – 20 weeks seems to be about “optimal.”

By the way, hand-held Dopplers are also high intensity ultrasound, and should be avoided.  They don’t always pick up a baby’s heartbeat until after the first trimester (although sometimes they can as early as 7 – 8 weeks).  They are riskier than other forms of ultrasound.  They are especially risky if you buy the at-home Dopplers just because you like to play around and listen to baby’s heart.  Don’t do it.

I haven’t had any ultrasounds with my last three babies, and don’t plan to this time, either.  I also refuse the use of the Doppler entirely.

I did not know about the Doppler until my fifth pregnancy, so I allowed it in my others.  My fifth baby was born a similar size to my others, but grew faster and more steadily during his first year and was a slightly larger toddler.  My others caught up in their second and third years with growth, but the first year was markedly different.  Coincidence?  …maybe, but there are studies looking into fetal growth restriction (in babies exposed to ultrasound) that lasts through the first year of life, so…maybe not.

Personally, I am not high risk.  I have never had a pregnancy or birth complication.  This does not mean it can’t happen, but it does mean I have no clinical indications for ultrasound use.

The only way I would consider an ultrasound is if I suspected placenta previa (location of the placenta can be felt from the outside if it’s anterior, and can also be heard with a fetoscope, in that case — but the exact location can’t be confirmed without ultrasound), and possibly if I suspected multiples.  I’m honestly torn on that one.

Some people will say, with no strong evidence that ultrasound is harmful, why not just get one?  That’s up to them to decide.  I personally feel safer, with my history, not getting one.

How do you feel about ultrasound?