Stop Complaining About The Mommy Wars When YOU Cause Them |
AD 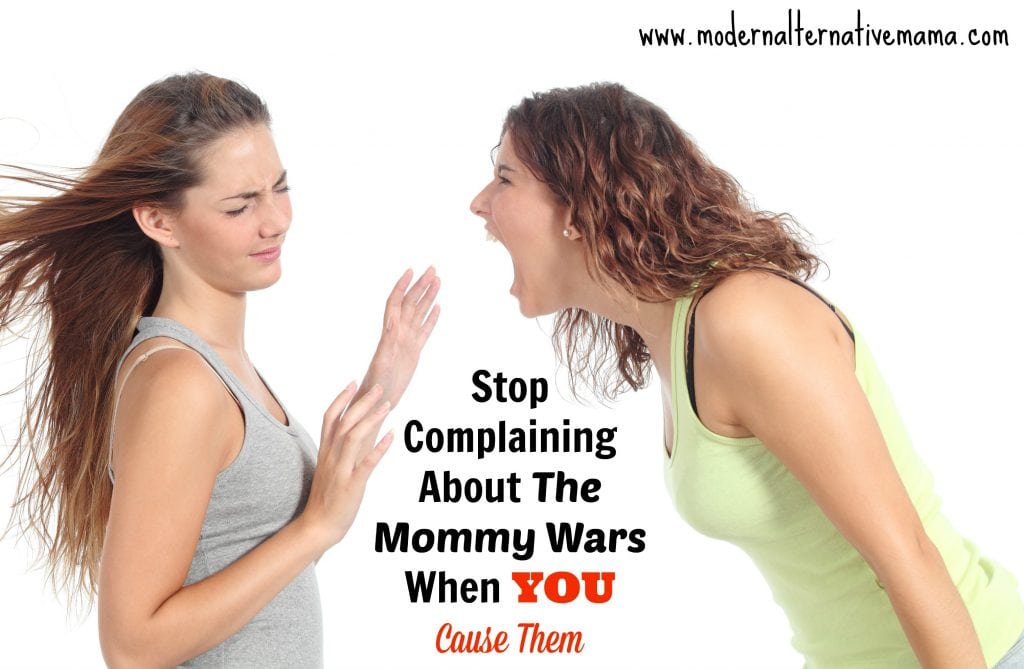 Stop Complaining About The Mommy Wars When YOU Cause Them

I’m fed up, you guys.  I’ve been watching things unfold and studying some history for the last several months, and I am done.  It’s just utterly ridiculous now.

What am I even talking about?

There’s the Mommy Wars.  People are constantly complaining about them.  My faith in humanity is already nearing an all-time low (because of the fiasco that is this country right now), when I started to look more closely at “The Mommy Wars” and a variety of blog posts.  What I found, in short, was that peoples’ words and their behavior do not match.

Effectively…people complain all the time about how they don’t like bloggers and news outlets that judge people, or pit people against each other, and why can’t the world just be a nicer place?  Why can’t we all just support each other and get along and believe and practice ‘to each his own?’

I’ll tell you why — because you guys flat-out don’t care about that stuff!  When media outlets post “nice” stuff, you don’t pay attention to it.  It’s only the crazy stuff that makes you pay attention.

Stop Complaining About “The Mommy Wars” When YOU Cause Them

Here’s the truth: there are tons and tons, and tons of articles out there that present a more balanced point of view on various topics.  Tons of posts that attempt to be balanced and fair and not judge people.

You guys don’t share them.  You don’t read them.

Media, including bloggers, want to provide you with valuable information.  That’s kind of my entire goal.  I can’t do that, though, if you don’t read the post.  (Side note: please, for the love.  Do NOT see my posts on social media, decide you are interested in them, and then ask me to spoon feed you the key points in the comments.  I know you’re busy and might not want to click the link — but I’m busy too, and I spent hours writing the post to answer your questions.  Just read it.)

The only way to get attention in this loud, loud world is to be controversial.  To be deliberately controversial and edgy and basically, you know, preach to the choir.  No one cares about unbiased, informative stuff.  It gets lost in the shuffle.  People just want to read stuff that goes along with what they already generally believe, with a nice dose of ‘shove it to the other side.’

Trust me, I know this.

Meanwhile, the nice posts, the ones that provide information, that take a balanced view…we’re lucky to get a few thousand people on those.  Even when we know that you all have been asking questions that those posts answer for months and we’re finally giving you what you said you wanted.  You don’t read it, and you sure don’t share it.

How This Flames the Mommy Wars

Some bloggers have made an entire career out of creating issues where there aren’t any.  Oh, you want to serve your family traditional foods?  Awesome!  Just make sure you always, always buy your meat from a local, true pastured farmer, or you might as well be poisoning your family.

There it is, you guys.  You have an emotional reaction to something, and you share it.  Either “Yes!  I told you so!” or “Can you even believe this chick?  What a jerk!”  But it doesn’t matter…because you read it, and you shared it, and so did others.

This might sound callous, but this is my full-time job and I’ve got bills to pay.  So do lots of other bloggers.  We’ve got to put food on our tables.  I’d prefer to do that by providing you with legitimate, helpful information that makes us both happy at the end of the day.  But if I’ve tried everything and I can’t…I’ve gotta stir up a little controversy.  It’s that, or explain to my children why there’s no dinner tonight.

(Yeah, yeah, I feed my children every night.  Usually more times per day than I’d like or find reasonable.  Don’t go calling CPS on me for that joke.)

So that’s the truth — you guys choose to read and share only the controversial stuff, which means there’s more of it, and it gets more views.  It’s like when people see 1 out of 20 posts I put up on Facebook, and of course they’re always the controversial ones that get lots of views…and then tell me that I’m about nothing but controversy!  No, you’re just missing most of it because you don’t care about that stuff or interact with it ever.

If you’re choosing to only read and share and discuss controversy — then that’s what is making the rounds.  And that is the Mommy Wars.

You guys caused it. Step Up or Shut Up

If you really want the Mommy Wars (which don’t exist, btw — you can still actually do whatever you want, regardless of other peoples’ opinions) to stop, then step up and stop sharing that stuff.

Stop getting all emotional about some stranger’s opinion and having to share it and discuss it and huff about it.  Seriously!

If you want to see positive, happy stuff — share that.  Your actions speak louder than your words.  Did your mother tell you that?  Mine did.

I’m tired of writing balanced, fair, educational blog posts just so they can be ignored in favor of click bait that people say they don’t want, but continue to read and share constantly.  I’m tired of people complaining that I never write anything nice because they don’t see the 95% of what I post that is nice.

So step up or shut up.

Yeah, I know some of you will say I’m just jealous because other bloggers are “more successful” than I am.  But I’ve seen the same thing happen with my own content.  The edgy stuff goes crazy.  The more neutral stuff doesn’t.

I also know that this isn’t going to change a thing.  You guys are just going to keep sharing the controversial stuff, ignoring the rest, and keep whining about how it everyone else’s fault that the world is so against you and so negative.  That’s what people do.  They want everyone and everything else to change, but they don’t want to.

That’s just me being real.  That’s what you wanted, right?

That’s really all I can say.  The people have power, and you are the people.  You choose what’s written and what’s shared based on how you interact with it and what you say.  You’ve all caused the Mommy Wars with your behavior, and you perpetuate them.  Don’t blame the media or the bloggers.  If you shared the nice stuff and avoided the controversy, they would, too.

I know I’d prefer to.

How do you feel about The Mommy Wars?