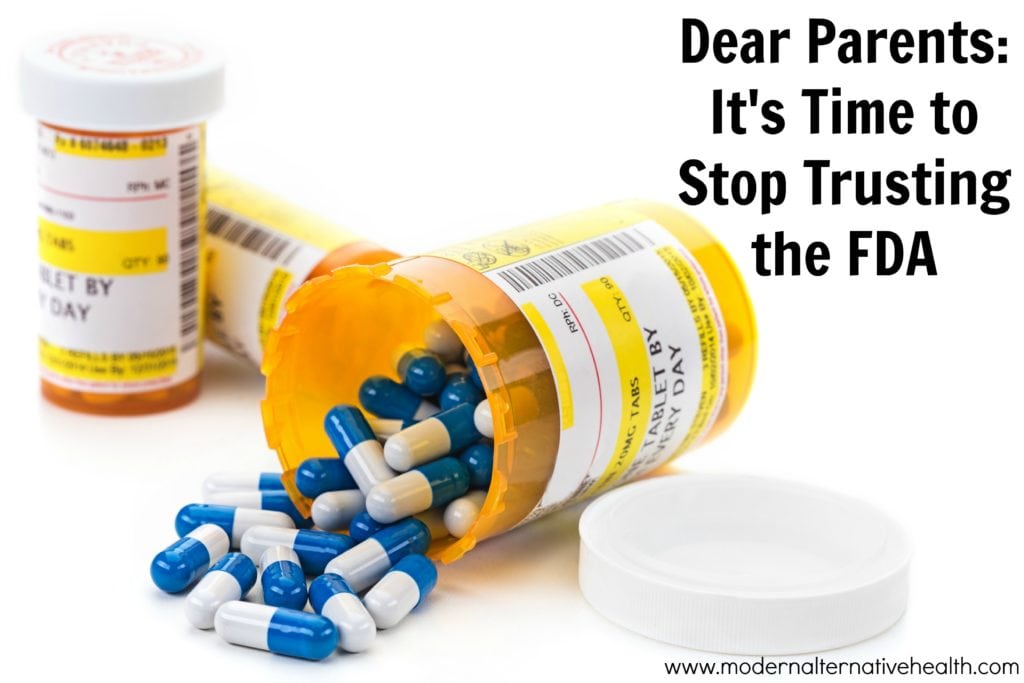 You know, I kind of hate to say this.

I don’t want to come off as an extremist, or a conspiracy theorist.  That’s why I rarely say something as blatant as “stop trusting the FDA.”  After all, no one can be an expert in everything, and you have to have someone to trust.  And why not trust major organizations?

Well, sadly, I have to say this now.  There’s irrefutable proof that they’re not here to protect our health.  Proof that they’re so wrapped up in their mindset and worldview that they can’t even realize that the world is changing, and people are changing.  Proof that they lack the ability to use logic and reason — and this places your family in danger.

This is serious, mamas.

We all want healthy children.  We all want to keep our children safe.  And that’s why, right now, you need to stop trusting the FDA.

Hyland’s Teething Tablets: Off the Market

Today, Hyland’s announced that, after 90 years, they will be pulling their popular homeopathic teething tablets off the market.

The tablets were recalled a handful of years ago due to concerns over belladonna, an ingredient in them, which a small number of parents alleged caused seizures in their children.  This was never proven to be causal, but the FDA acted cautiously in issuing the recall anyway.

Interestingly, most major medical bodies consider homeopathy little more than “magic water,” with no active ingredients left.  So, which is it?  Is the belladonna in the homeopathic tablets “magic water” (no actual belladonna remains), or is it dangerous?  It simply cannot be both.

The FDA was never asked to clarify this position.  They still haven’t.

In recent weeks, the FDA issued a warning about teething tablets.  It was not a recall, but it was over the same issue (belladonna).  This situation left many parents confused, and upset.  Parents who remembered the recall thought it was a re-sharing of that issue.  Newer parents were upset that they might be harming their babies unknowingly.  There were a lot of questions.

Since the FDA doesn’t seem to be ready to stop warning against perfectly safe natural remedies any time soon, Hyland’s decided to pull the tablets from the U.S. market.  It’s important to note that they have not stopped making them — in other countries, homeopathy is common and even prescribed by doctors, and Hyland’s will continue to distribute this product in those countries.  The U.S. is the only one that is completely backwards on natural remedies.

Speaking of being completely backwards, the FDA takes a much more lackadaisical stance towards their “approved drugs.”  We’ve seen antibiotic resistance skyrocket as millions of unnecessary prescriptions were written.  We’ve seen huge scandals like Vioxx, where even though the studies conclusively proved the drugs were potentially dangerous, they were approved anyway, and killed millions before the FDA finally stepped in to pull them off the market.

Seeing that the FDA allows “approved drugs” to harm and even kill millions of people, while badgering natural companies that have fewer than 10 reports of unproven adverse effect claims, shows us definitively that it’s not about keeping people healthy.

I use teething tincture to ease my little ones’ teething pain.  Buy it here. A new study is about to be published, and the preliminary reporting on that study came out today.  It attempted to look at the different messaging between “anti-vaccine” and “pro-vaccine” people in online conversations.

What they found, however, was exactly the opposite.

That’s an interesting finding.  But, the conclusion they came to was the most damning piece of it.

Despite all the evidence to the contrary, they concluded that “anti-vaxxers” were still wrong and crazy, and “pro-vaxxers” were still right!  This shows a complete lack of rationality or ability to reason scientifically.  They forced the conclusion to fit their pre-conceived notions and biases, despite getting findings opposite what they expected.

Basically, they said that “anti-vaxxers” purposely used “pseudo-science” and stayed calm in order to sway people, while “pro-vaxxers” got furiously angry because they knew they were right, had a better understanding of science, and were desperate to get people to see the light.

Let’s just take a step back.

These researchers did not look into the actual claims or evidence from either side.  They found that people opposing vaccines were calmer, more rational, and presented more (allegedly) fact-based information.  And they still concluded that pro-vaxxers were correct, and were justified in using immature, emotive tactics to manipulate people!

This is truly the most breathtakingly obvious example of bias in the scientific literature that I have found.

It makes me think that this is how they’re doing all of their vaccine “science.”  They know what result they want to find (“vaccines are safe and effective, the end”), so they ignore whatever results they get that don’t fit their pre-conceived notions, and conclude what they wanted to conclude.  They find what they wanted to find.

Then, they turn around and accuse people who question vaccines of doing this exact thing — cherry-picking information, confirmation bias, living in echo chambers.  They’re projecting their own insecurities onto the very people who are trying to save them from themselves!

If they can’t even see the bias here, how can you trust them to tell you the unbiased truth about vaccines?  Do they even know what that is?

They’ve Lost Sight of Everything

I hesitate to even mention this one, but I saw a blogger (who shall remain nameless) post earlier today that breastfeeding is less “baby-friendly” than vaccines — along with a meme that read “Breast is good, fed is better, vaccinated is best!”

No one thinks that optional medical care and feeding your child are comparable.  This meme stupidly implies that it’s okay if you don’t feed your child, so long as you vaccinate them!  I’m sure that wasn’t the blogger’s actual point, but who would be foolish enough to even attempt to draw such a conclusion, even in hyperbole?

These are three examples that happened just today.

Even if you’re on the fence about all this natural parenting stuff, I urge you to see how insane this pro-medicine side has become, and to distance yourself from it.  You can make rational decisions to use parts of Western medicine without accepting it wholesale, and aligning yourself with extremists such as these.

That’s exactly what they are now — extremists.

Here, we ask questions.  We think for ourselves.  We don’t accept any way of thinking or being at face value.  We understand that everyone is a little bit different, and so are their needs and choices.  We know that that’s okay.

So, mamas.  There it is.  It is flat-out time to stop trusting the dangerous FDA.  It’s the only way we can keep our babies safe anymore.

Are you going to stop trusting the FDA?  How do you feel about this?