Dear Secretary of Education, I Have Some Concerns - Modern Alternative Mama
AD 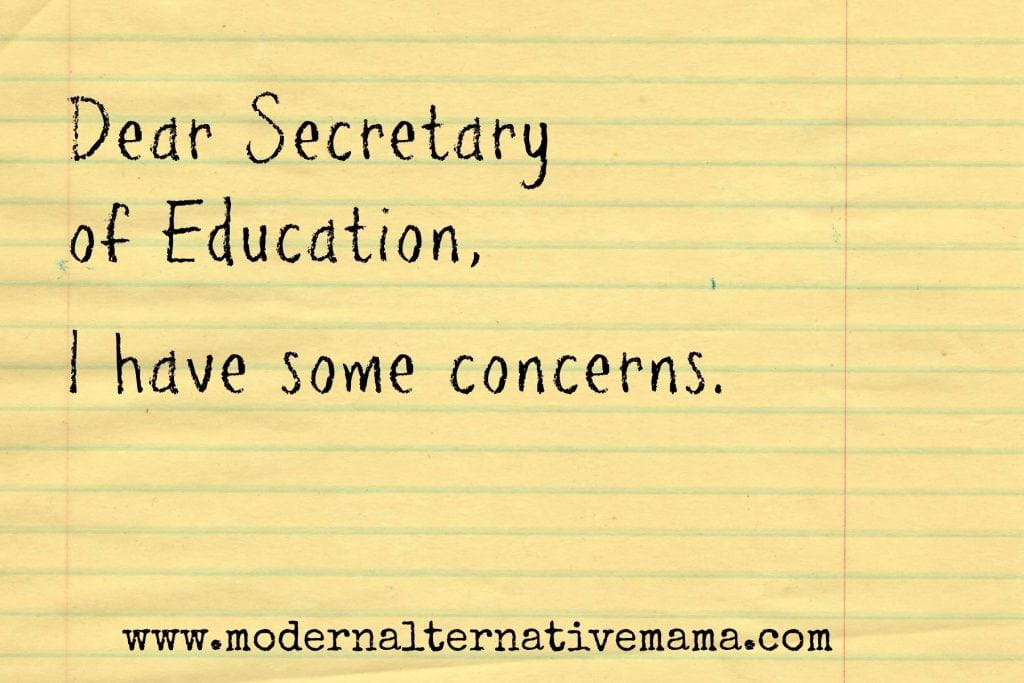 Dear Secretary of Education, I Have Some Concerns

The Christian Science Monitor hosted a breakfast with the US Secretary of Education last week. On the menu: bacon, eggs, muffins, and narrow-minded ideas about eduction.

The Secretary of Education’s Perception of Homeschooling

When asked about homeschooling, US Secretary of Education John B. King, Jr. said that he’s concerned that homeschooled students aren’t “getting the range of options that are good for all kids.” (source: Politico) He continued, “Obviously, it’s up to families if they want to take a homeschool approach,” but then said he worries that “students who are homeschooled are not getting kind of the rapid instructional experience they would get in school” – unless parents are “very intentional about it.” King said the school experience includes building relationships with peers, teachers and mentors – elements which are difficult to achieve in homeschooling, he said, unless parents focus on it. (source)

So, let’s sum up King’s worries:

Let’s flip the script. Secretary King, I have some concerns for you, too. A little something to chew on along with your eggs and bacon…

Dear Secretary of Education, I Have Some Concerns

Answering Mr. King’s Concerns With My Own Concerns

Are all public school children getting a wide range of options? (The gap between urban and suburban graduation rates is 18%, and in New York, that gap is 29 percent. Great range of options there.) Besides graduating at higher rates, homeschooled students are working and interacting at every level of society.

It worries me that some public schools’ approach to education is sorely lacking. Public schools spend an average of $9963 per student per year (as opposed to parents who spend an average of $500 per homeschool student) and yet only 69% of the general population has read a book in the past 6 months. (For homeschoolers, that’s 99%. Yeah, that’s right.) Perhaps education isn’t a problem you can buy your way out of.

You’re concerned that homeschoolers aren’t getting rapid instructional experience. I’m concerned that public school student aren’t reading books, understanding government and politics, participating in community service or graduating high school. Let’s not forget that education isn’t an end to itself. It is also a means to being more meaningful contributors to society, better neighbors, healthier and happier people.

And “rapid.” I’m concerned about that, too. What’s the virtue in speed? Does slow and steady not win the race? Doesn’t every child learn at their own pace and in their own way, according to their unique set of gifts and abilities?

You’re concerned that some parents aren’t “intentional” enough. Who are these homeschooling parents?  Sounds like some shifty folks. It’s as if they said, “Hey, it’s a lot of work to get the kids to school on time. So, let’s just say we homeschool so we can sleep ’til noon.” But, wait…what’s that? More than 66% of homeschooling fathers have at least a bachelor’s degree or higher degree. The same is true for more than 62% of homeschooling mothers.)

I’m concerned about your lack of respect for parents and their judgement. (source) As with other things (like vaccination, for one) why mistrust the people who have the most emotional, spiritual, financial, cultural investment in the child in exchange for trusting a bureaucracy who has never met your child and has nothing at stake in playing fast and lose with their education and futures?

Mr. King, you’re concerned that homeschooled students aren’t building relationships with their peers, teachers and mentors. Are you equally concerned that public school students aren’t building healthy relationships with siblings, parents, grandparents, and neighbors? We have only so many hours in a day. If a child is at school from when the bus picks them up at 7am until they get home at 3pm, not including hours away from home at extra-curricular activities such as sports, clubs and music lessons, adding to that the 1-2 hours of homework each night, when does that leave him time to have tea with his grandmother or to help his grandfather work on the car or to play outside with his siblings?

One may be in school for 13 years of life, but family and community will be there your whole life. The “real world” is not within the four walls of the school. The real world is the home, the farm, the market, the church, the neighborhood. By isolating and insulating our young people from the real world for such a large chunk of their daily young lives, how is that teaching them how to maintain real relationships in other contexts?

Wake up, that’s the coffee you’re smelling.  Let’s face the facts, Mr. King. Homeschooling is on the rise in the United States. According the the Family Research Council “The home-education movement has exploded under Obama, spiking from 1.5 million to more than two million in just five years.” (source) Homeschoolers are not going away. Public school is experiencing a growth rate of 1%. Homeschooling is growing at a rate of 7%. There are over 2 million homeschoolers in the United States. And the majority of those who were homeschooled, will also homeschool their kids. In fact, over 82% of those who were homeschooled say they will homeschool their children. (source: HSLDA)

I am one of them.

I was homeschooled, back-in-the-day. When my parents embarked on the journey of homeschooling we didn’t have any other homeschoolers in our social circle, church or family. We were it. It was the great experiment. But, my parents were willing to make whatever sacrifices they had to in order for their children to become successful, happy and well-adjusted adults. For us, that meant homeschooling. (That may not be the case for your family and that is OK. We all have to make the decisions and sacrifices that make sense for us.)

And all their children (my siblings and I) have chosen to homeschool our children. You can’t stop this trend with false narratives of children without options and parents without ambition, students who are not socialized and don’t know how to make it in the real world. That’s a pure fiction. And we see right through it.

What are your concerns with the educational system?