What is Lotus Birth? |
AD 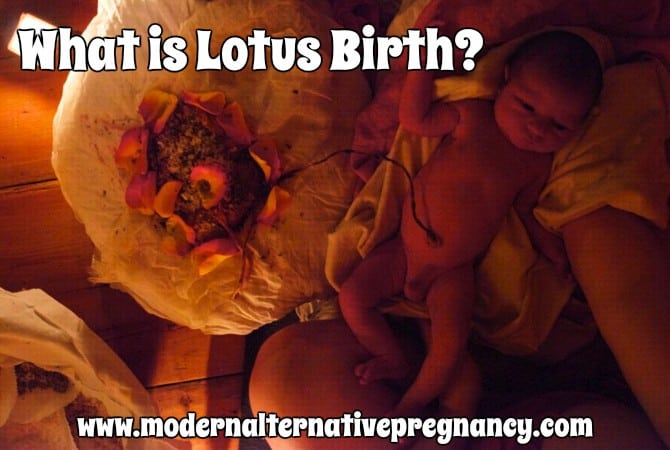 When I had my first child, the plan was to delay the clamping of the cord until it stopped pulsating. We had planned on being at home for his birth, but due to circumstances we ended up at the hospital. After the placenta was delivered the nurse immediately clamped the cord. My son, who was premature and ended up needing to be in the NICU for eight days, lost out on the benefits of delayed cord clamping. Learn more about the benefits of delayed cord clamping here.

For my second son, I wanted to make sure it happened. The benefits were totally important for me to make sure it happened. I expressed it numerous times to my husband and my midwifery team. Since we had a home water birth it was a lot easier for me to have control over what was going on. In the hospital, there seems to be such a rush with everything and there is always a dilemma but at home, it is just so much more relaxed.

After my second son was born the placenta was born shortly after. We waited for the placenta to stop pulsating before clamping and cutting it. All the benefits of delaying the clamping were worth it for me. My midwife then took my placenta and made a beautiful tree of life type print for me to remember that moment. The placenta is in our freezer until we decide what we would like to do with it. Many women choose to encapsulate it while others plant it with a tree in their garden. There are many options for the placenta.

The Placenta: Special or Clinical Waste?

With my first son, we did not get a choice, since we were in the hospital. My placenta was considered waste and it was disposed of. Honestly, I was so overwhelmed with having a son in the NICU that I did not even think about my placenta. I am grateful that I had a choice with my second birth.

It is an unfortunate truth that the placenta is considered clinical waste by most people’s standards. In a hospital setting the placenta is just an afterthought and is referred to as “afterbirth”. On the other hand, “In home-birth practices, the placenta is constructed as a ‘special’ and meaningful element of the childbirth experience” (Source).

Instead of allowing the placenta to be discarded as waste, there are ways to honor that part of the birth experience. The placenta is an amazing organ; it seems to be a misfortune to just toss it without a second thought. Some other options “include the burial of the placenta beneath a specifically chosen plant, consuming the placenta, and having a lotus birth, which refers to not cutting the umbilical cord after the birth of the child but allowing it to dry naturally and break of its own accord” (Source). Lotus birth is the practice of leaving the umbilical cord unclamped and uncut, this leaving the baby attached to the placenta until there is a natural separation. The baby, cord and placenta are treated as one single unit until separation occurs. “Short lotus birth (severance of the fully internally sealed and shrunken cord 4-6 hours after birth) is a common practice in traditional midwifery and indigenous culture in all regions of the earth, and full lotus birth (nonseverance, allowing the cord to dry to sinew and naturally detach) was a practice mentioned in diaries of the early American West European settlers who produced some of the hardiest children known in American history” (Source).

When the placenta is born, it is kept at the same level as the baby in order to allow full transfusion of the nutrient rich blood and hormones (Source). By not rushing to clamp and cut the cord, there is no additional stress on the baby’s system. The placenta is usually just wrapped in a cloth and left alone during the first few hours of mother-baby bonding time (Source).

When the time is right, the placenta is placed in a special bowl or wrapped in a special cloth. Many times it is rinsed in order to clean it and remove clots. “Powdered herbs such as Lavender, Goldenseal, Rosemary or Tulsi may be applied for preservation during the drying process, and re-applied daily. Sea salt is also applied generously on both sides to aid drying and minimize scent” (Source). The mother oftentimes just carries the placenta in a bowl or bag to keep it close to baby. The sturdy, flexible cord is mostly dried just a few hours after birth (Source).

Why Would I Want to Consider a Lotus Birth?

No matter what type of birth you have, a lotus birth may be an option for you. Even women who have cesareans or with babies that are premature, lotus birth is still an option. The benefits are definitely something that need to be considered. The benefits of delayed cord clamping can be ensured by not clamping and cutting the cord. When we allow the cord to stop pulsating before clamping it, “the infant obtains 40 to 60 mL of ‘extra’ blood from the placenta….The loss of 30 mL of blood to the newborn is equivalent to the loss of 600 mL to an adult” (Source).

Beyond the guaranteed benefits of the delayed cord clamping process, a Lotus Birth has other benefits. For those who have experienced Lotus Birth babies, they observe that the babies are “more relaxed and peaceful babies who do not manifest the common 1 lb. newborn weight loss and breastfeeding jaundice that is associated with the first week of life after ‘normal’ birth’s cord cutting” (Source). There is also significantly less risk of infection at the navel site when the Lotus Birth process happens (Source).

Lotus Birth as a Continuation of the Birthing Process

In our fast paced society, many women have visitors within a few hours after birth and they tend to go out with their newborn to visit family and friends. By having a Lotus Birth, the birth time is extended into days. These days become a sacred part of the birthing process and create a time of rest and bonding for the entire immediate family. “Lotus Birth is a call to return to the rhythms of nature, to witness the natural order and to the experience of not doing, just being” (Source). What an incredible benefit of Lotus Birth.

The Royal College of Obstetricians and Gynecologists (RCOG) released a statement in 2008 that suggested that there may be risks associated with Lotus Birth that must be considered when making this decision. The RCOG said that, “If left for a period of time after the birth, there is a risk of infection in the placenta which can consequently spread to the baby. The placenta is particularly prone to infection as it contains blood. Within a short time after birth, once the umbilical cord has stopped pulsating, the placenta has no circulation and is essentially dead tissue. If women do opt for umbilical non-severance, the RCOG strongly recommends that their babies be monitored carefully for any signs of infection” (Source).

Like with any other choice parent makes when it comes to pregnancy and birth, it is important to weigh all of the risks and the benefits in order to come to a decision that is the very best for your family.

There are clearly many benefits to Lotus Birth which makes it something worthwhile to consider as you plan your next birth. Talk to your friends, talk to your midwife, try and find people who have experienced the process and can tell you firsthand what to expect and the benefits or risks that they experienced.

Have you or anyone you know chosen to have a Lotus Birth? How was it?