Five Things That Bother Me About the Dr. Sears Investigation |
AD 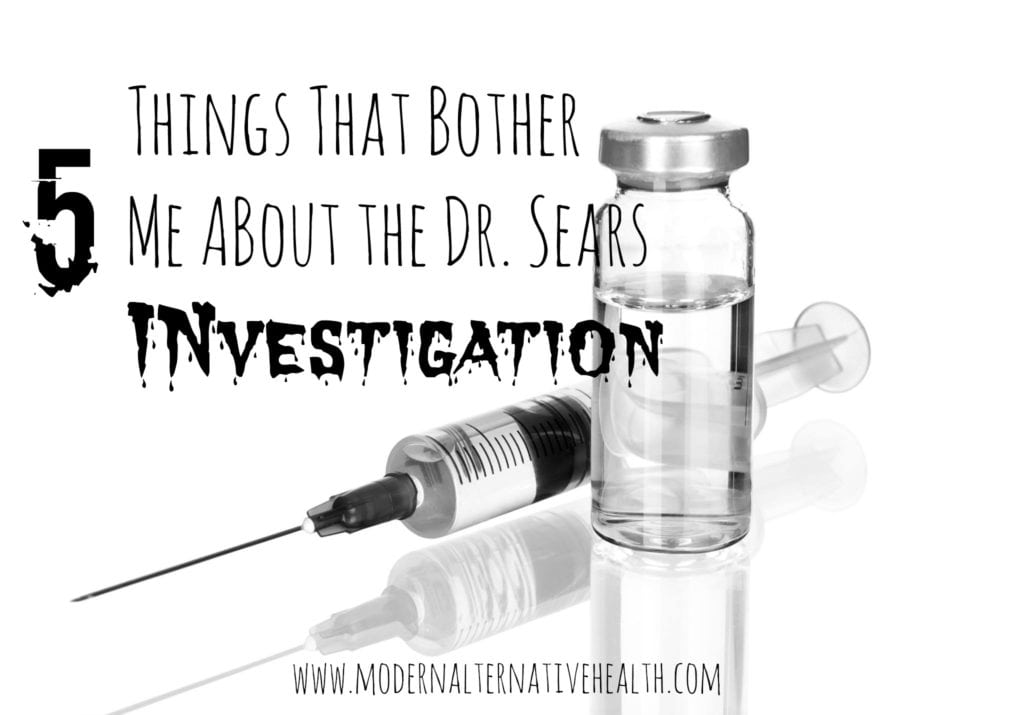 Five Things That Bother Me About the Dr. Sears Investigation

Can We Find Some Common Ground?

Whether you consider yourself an “anti-vaxxer” or a “pro-vaxxer” can we find common ground in this: “pro-all-the-information” and “pro-doctor-patient-privilege”? Or how about “pro-keep-the-government-out-of-my-private-business”? Yeah, that seems like a good place to start. The debate about vaccines is not a war and if we treat it like one we will have a whole bunch of regrettable casualties. This debate should be information-based, research rich and patient-care driven. But, instead of debating ideas, we treat other people like enemies. As California Medical Board spokesperson Cassandra Hockenson said, “The biggest weapon we have is to take away someone’s medical license.” (source) Weapons? Really? When did this becoming about winning at all cost? I thought this was about what is good for the children, not about who wins in a war.

One of Those Possible Casualties

For those that haven’t heard, well-known physician, Dr. Bob Sears is facing disciplinary action from the California Medical Board for a vaccine exemption he wrote in 2014. The charge is “gross negligence.” Was the child injured by Dr. Sears? Did he suffer permanent damage because Dr. Sears failed to treat a serious injury or illness? Did the child die? Did Dr. Sears ignore the child or parent’s concerns? No. None of these things. According to the California Medical Board, the neglect is that by writing the vaccine exemption Dr. Sears left the “patient, J.G., the patient’s mother, and his future contacts at risk for preventable and communicable diseases.” (source)

Forgive a mother for a (well-deserved) rant. Here are five things that bother me about the whole thing:

Five Things That Bother Me About the Dr. Sears Investigation

Listen, if I go to a doctor and I have a concern about myself or my child and I discuss it with the doctor and together we come to a plan of action (which can be to do nothing or not intervene. Let’s not forget that “do no harm” is good medical practice), that is between me and my doctor. What should I take into account when making these medical decisions? My (or my child’s) health and well-being. This is first and foremost. And all. That is what the doctor should be primarily concerned about, too. I do not expect him, when looking at my child’s unique medical history–that includes a severe vaccine reaction–to say, “Well, I know paralysis is a real risk and concern for this particular child. But, we really don’t want to subject strangers at the mall to the possibility of chicken pox. So, take one for the team, OK?”

This Brings Up the Whole Notion of Confidentiality

The information in that medical file and the details of that medical discussion in his medical office: private. Physician-patient privilege is the concept that information told to a physician pertaining to medical care and in the context of receiving medical care cannot be divulged or used against the patient. (source) Mandatory vaccine laws that are enforced by compulsory education violate this privacy. In order to comply with the law that my child goes to school, my doctor must divulge the details of my medical history. This is wrong. Take this out of the context of vaccination and see if it still makes sense. Should a doctor have to share the details of things like HIV or hepatitis or cancer or diabetes status in order that a child be allowed to attend school? If it is found out that a child does have, let’s say,  HIV, should they be denied an education? There’s only one right answer here.

If you believe that the government should stay out of wombs and vaginas and end-of-life decisions, but you are for the government enforcement of vaccines, you have a serious break in logic.

Dr. Sears is no anti-vaxxer. As far as I know he vaccinates his own children, vaccinates his patients, and consider’s himself “pro-vaccine.” To his credit, he lets parents make the final decision in regards to their children’s medical treatment, sometimes suggesting an alternative (more cautious) vaccine schedule. In the case being used to bring this charge against Dr. Sears, the mother explained that the child had severe vaccine reactions (including temporary paralysis) in the past, asked to not vaccinate and Dr. Sears granted the exemption in the form of a letter. Should be the end of the story. But, it’s not. We are from the government and we’re here to help you….

When I hire a doctor to help me to live well, I am not hiring the bureaucrats at the California Medical Board to tell me whether or not the decisions I make are valid. I do not need the government’s permission to decide what is best for my child. When bureaucrats decide to make an example out of someone–in this case, Dr. Sears–no one wins. It exchanges healthy scientific debate for a witch hunt. Facts, evidence, history, philosophies, actual outcomes don’t matter at all. What matters is that anyone who questions the status quo, anyone who goes against the tide, anyone who rocks the boat knows that they are uninvited to the party. It’s as if the California Medical Board has told parents in California, “Listen, I’m gonna make you an offer you can’t refuse. Vaccinate your children according to our set schedule, regardless of personal history, religious beliefs or doctor’s advice. If you don’t you may wake up with your favorite doctor’s head in your bed.” The powers-that-be have become the unelected mob bosses of our health care system. And guess what? No one wins. #gotothemattresses

“The biggest weapon we have is to take away someone’s medical license.” (California Medical Board)

Scientific discovery and medical advancement thrives in an environment of healthy debate. Some of the greatest discoveries of our time were fueled by men and women who questioned everything; rebels for whom nothing was off the table. But, today apparently, someone who simply says, “A lot is not known, let’s err on the side of caution in some particular cases.” is threatened with legal action. No. One. Wins. This is not the position of people who care about advancing in truth.

According to the LA Times, “In the six-page accusation, the medical board faults Sears for failing to obtain a detailed history of a 2-year-old patient’s vaccines before writing the letter and instead relying on the child’s mother, who described how the boy lost urinary function and went limp in response to previous immunizations.”

Since when is it a crime to take a mom at her word?

If you have ever taken your kid to the doctor when they’ve been sick, here’s how it goes: The doctor asks what the problem is. The parent says something to the effect of, “He was up all night vomiting. I think it might have been a reaction to something he ate last night. He also had a fever, but it broke this morning at 2am and he finally went to sleep.” The doctor makes some notes to that effect, takes the parent completely at her word, and writes a prescription for electrolytes or something for the fever. He doesn’t ask for proof that the child was vomiting. In most cases he doesn’t take vomit samples to send to a lab. He doesn’t do a series of blood tests. He just believes the parents and recommends a course of action accordingly. More often than not, parents are the ones who diagnose. Doctors advise and prescribe.

What is our other option rather than trusting parents? Making a judgment about medical negligence is a completely subjective process–the California Medical Board admits it! Steve Boreman, who was formerly the attorney general’s liaison to the California Medical Board, said in an interview with CNN that making a judgment on alleged medical negligence is “a matter of opinion. It’s not black and white.” He says that the standard of care varies state to state, region to region and even among medical sub-specialities. (source)

Unless a parent is displaying some serious cause for concern or abuse is suspected, parents should be trusted. When they say a child had a vaccine reaction, subjecting a child to numerous, expensive and invasive tests is just not necessary! This is NOT negligence. It’s common sense. It’s good practice. It’s humanity, people.

You do not have to be totally anti-vax to have stake in this. At its core this issue is personal freedom and responsibility. It is about never stopping in our quest for truth and for answers to complicated questions. It’s also about resisting the school-yard-bully who someone gave the job of overseeing our medical decisions.

If you love freedom…

If you take responsibility for your own decisions and think others should, too…

If you aren’t afraid of asking tough questions… What are your thoughts on the Dr. Sears investigation?