What I Learned About Modern Life From My Older Neighbor |
AD 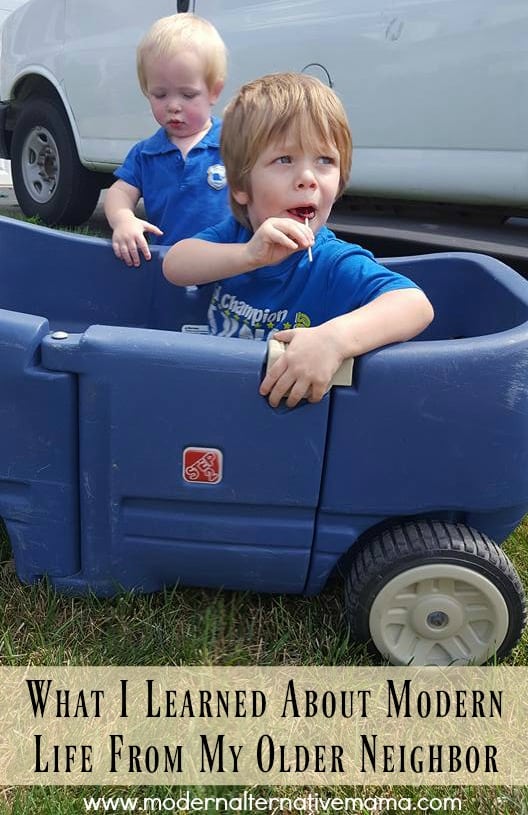 What I Learned About Modern Life From My Older Neighbor

It was a gorgeous day.

One of those days where you kind of just wish you were on a beach somewhere.  For the first time in weeks, it wasn’t humid.  The sun was warm, the breeze was cool.  The kids begged to go ride their bikes, and I couldn’t say no.

We headed outside.  Even the 14-month-old was eager to go, racing out the door as fast as his little legs would carry him, as soon as a sibling opened it.  I trailed behind a bit.

The older three kids hopped on their bikes and began riding.  The 3-year-old brought me the wagon and demanded I take him and the 1-year-old for a walk.  I loaded them up, and off we went, meandering along the sidewalk in our neighborhood.  The older kids raced back and forth on their bikes, much faster than we were.

A ways up the sidewalk, an elderly woman had come out of her house to get her mail.  We were approaching her just as she was turning around to walk back to the house.  I smiled at her.  “Hi!”

What I Learned About Modern Life From My Older Neighbor

She stopped to chat.  I had never met her before.

She asked how many kids I had.  The older ones were still scattered around on their bikes.  “Five,” I told her.

She smiled.  “I had five too!”  (I don’t know what it is, but I always seem to meet ladies who had lots of kids.  They’re happy to see my bunch.)

We talked for a few minutes.  All of my kids gathered around us and introduced themselves.  Some talked about their birthdays and favorite activities.

She asked my how old the littlest was.  She asked me if I was planning to have more children.  (When I said yes, she said “I really wanted 6, but it just wasn’t in the cards.”)  She asked if we homeschooled — my kids are obviously school age and it was the middle of the afternoon.

She was sweet.  Then she needed to get back into the house, because she’d just had knee surgery and couldn’t stand up too long.  Plus, my 3-year-old was demanding I “go!”

It was a pleasant little chat with a nice neighbor on a gorgeous afternoon, and yet it made me think.

It Used to Be Simple

I’m not sure how old she was.  She mentioned that she has a great-grandchild, so I’m guessing she’s close to 80.

If we consider all the “advice” we’re given these days about what to say or not say, then she said lots of stuff that was wrong.  She said “You have your hands full,” and asked about my reproductive plans.  Who does that?

Back in her day, there were no “10 Things Not to Say” style internet lists, to let her know all the ways she might be offended people if she opened her mouth.

These days, we do have the internet.  We do have those lists.  People tell themselves and others that it’s okay, even somehow righteous, to be offended when someone is intending to be nice to you, because they used the wrong words to do it.  We’ve stopped caring about connecting with another human being, and started caring that they somehow read our minds and don’t say the wrong thing.

I don’t know why people are so offended by all of these things.  Innocuous things.  “You have your hands full!” said with a smile is not an insult.

Sometimes, I feel beaten down by it all.  And I know I’m not alone.  Friends come to me privately and say things that they wouldn’t ever say in public, because they would be attacked for doing it.  Their words would be twisted.

Maybe it struck me so much because it was a Monday that we were walking, after a tough weekend.  A weekend in which I said, “I want to help people with autism, who are struggling, to be the best versions of themselves.”  I meant well.  The message received, however, somehow, was “I hate autistic people and think they’re better off dead.”  I still have no clue how my sincere and well-intentioned words were twisted so badly.

Language is constantly changing.  What was acceptable to say, or even “politically correct terminology” 5 years ago, is now considered out of date and offensive.

I suppose some would consider it offensive to ask a woman if she’s planning to have more babies.  It’s not really any of their business.  But many women love babies and enjoy talking about them, and don’t mean anything by the question.  (It’s not really cool to say, “You’re not having more, are you?  You are using birth control or getting sterilized?” because there’s such a negative and judgmental attitude there.  It’s obvious from the way it’s worded.)  But “Are you going to have more?” is neither good nor bad.

It would be better for all of us if we just stopped being offended by everything all the time.  Most people mean well.  Rather than calling them out because they didn’t say it right, if you know they weren’t intentionally being rude…just give them the benefit of the doubt.  Answer politely (if you’re not comfortable you don’t have to answer the question directly, or you can smile and say something like, “Yes, my hands are full, but my heart is fuller”).  Don’t call them out.  Don’t be rude.

It’s just ironic that when someone means well, and says the ‘wrong’ thing, that people who are upset about that person being ‘hateful,’ when they really weren’t, will then speak hatefully to them, to teach them how wrong it was to be ‘hateful’ in the first place.  That’s just crazy.

The Lessons Are Important

Yes, I got all of that from a five-minute conversation with my elderly neighbor.

I appreciated that she wasn’t worried about saying or doing the wrong thing.  She spoke up, she said what she was thinking, but gently.  She made small talk.  She connected with me on an area we obviously had in common — a love of children.

We both parted from the interaction feeling a bit happier, I think.  Positive human contact tends to do that.

We all need more of that in our lives.  We need more contact.  We need more positive interactions.  We need to get out and simply see the world, and take it one minute at a time.  We’re so much better off, than when we’re sitting in our quiet little social media groups, where people largely think the same, and coming up with more and more warped ways to be offended by things that are different from us.

I get it.  I do it sometimes, too.  We all do.  And, it’s nice sometimes to be surrounded by others who do “get it” and not have to stick to small talk or explain yourself.  We can do both.

But on the next gorgeously sunny day…go out for a walk.  Greet your neighbors with a smile and a wave.  Have a short chat.  Connect with another human being.  Remember that this is what truly matters.

How do you feel about modern life?  Do you think we ever forget what’s important?