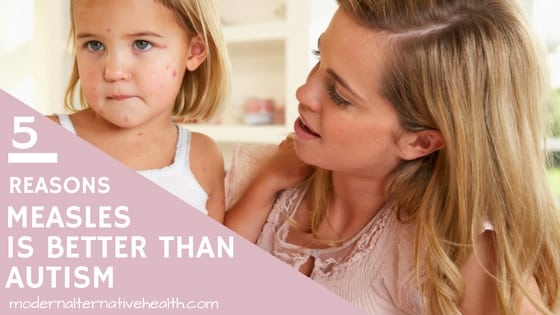 Since the CDC whistleblower case broke last year, and the documentary Vaxxed: From Cover Up to Catastrophe aired this year, the fact that the MMR vaccine DOES cause autism in some susceptible individuals can no longer be denied. We’ve written pretty extensively about both measles and autism. Still, some parents think that measles is so deadly that even if vaccines do cause autism, they’d prefer to have a child with autism than battle measles. Which is ridiculous, because measles is better than autism.

For the vast majority of children, measles is a mild illness that passes quickly. Children with autism will deal with a lifetime of struggles, and everyone around them, parents, caretakers, teachers, and siblings, are affected.

And before you cry for acceptance of neurodiversity, keep in mind, I’m referring to children with severe, regressive cases of autism, not those that are high-functioning and more self-sufficient.

Don’t tell me you’d rather take your chances with autism than expose your child to measles. Measles is better than autism.

The argument that you’d rather take your chances with autism than face the possibility of measles or some other “vaccine-preventable” disease makes no sense. If you’ve done any research on the matter, you’ll find that in the majority of outbreaks, most affected people have, indeed, been vaccinated.

Not only are the chances of developing autism following vaccinations much higher than we’ve been led to believe, but the efficacy of vaccinations is questionable at best.

Here are five reasons to choose this benign childhood disease over autism.

You know what’s great about getting measles? Once you have it as a kid, most people acquire an immunity to it forever. The antibodies that are created when you naturally catch childhood diseases help your immune system to know how to fight off the sickness when you’re exposed again at a later time. (In rare cases, measles immunity isn’t lifelong.)

Vaccine-induced “immunity” wanes in a matter of years and cannot compare to natural immunity.

You know what’s great about autism? Nothing. When you “catch it,” it’s there to stay, imparting no future gifts of immunity. Children don’t just “get over” autism without serious healing efforts.

Note: I’m just being cute. I know you can’t “catch” autism and it’s not contagious. However, most cases of autism occur following exposure to some insult to the immune system, such as vaccines, pharmaceutical drugs, or environmental toxins. Are some children born with autism? Probably. Do some children who were never given vaccines or pharmaceutical drugs have autism? Yes.

There is no doubt, though, that regressive autism occurs. One study concludes, “The mass of scientific evidence compiled by researchers clearly indicates that the incidence of autism occurs following vaccination and is most closely associated with the schedule of vaccines culminating in the MMR vaccine.” (source)

Autism is a big deal. It’s not something to take lightly, and it is worse than measles. We need to stop saying that autism isn’t a big deal and call it what it is: vaccine damage, toxicity, and poor gut health.

If you get measles, you have a 99.7% chance of pulling through just fine. Want to read more in depth? Check out “Is Measles REALLY So Scary?”

Not only does measles give you immunity to future exposures to it, it also strengthens your immune system so you can avoid other future illnesses, including autoimmune disease and even cancer.

You see, our bodies were actually created to get these regular, normal workouts throughout childhood. Just like our muscles need use to grow and become strong, so our immune systems need to be used in order to bulk up and prepare to fight off invaders.

Instead of catching what used to be normal childhood illnesses, most kids are vaccinated against them, providing a false sense of immunity and overloading the immune system. So now, children have weakened immune systems that allow them to catch every common cold and suffer from frequent ear infections. Suffering through one week of discomfort with an illness like measles is surely preferable to long-term, frequent and annoying illnesses.

For the vast majority of children, measles will be a short-term, uncomfortable illness. They’ll get a fever; they’ll have a rash; they’ll get to stay home from school (or skip their home school work), which kids are always angling for anyways. Yeah, being sick isn’t necessarily fun, but it’s a rite of passage for childhood.

Once the child’s immune system has fought off measles, thereby receiving lifelong immunity, they’re back at ’em in no time (kids are so resilient, you know).

When a child gets autism? There’s no easy bouncing back. A bowl of chicken soup ain’t gonna solve this problem (though soup can help to heal autism).

Autism results in long-term neurological damage with can affect a child for lifetime, though there are children who recover through the hard work of their warrior mamas! Indeed, many studies, including this one, have found that gut health has a profound impact on the behaviors of those on the autism spectrum, and interventions such as diet and probiotic supplementation may be helpful.

Measles is Easier to Cure Than Autism

There’s actually no cure for measles. Know why? Because it’s a benign childhood disease.

After some rest and time, and maybe some cod liver oil for vitamin A, most children are good as new in no time. (Vitamin A treatment has been found to lower measles death rates by 62%!) (source)

The general consensus in the medical community is that there is no cure for autism. That’s actually not true, autism can be cured, but it’s not a walk in the park. Healing autism involves intensive intestinal healing, expensive supplements, and plenty of time and patience, but it certainly can be done.

Wouldn’t it be nice, though, if autism was as easy to heal from as measles. Hmm… with the fear surrounding measles, and the flippant attitude towards autism, you’d think it was the other way around.

Less than one thousand people per year get measles in the US, and only one death has been confirmed in over a decade (and even then, the cause of death was arguably due to something else, as the woman had a number of conditions contributing to poor immune function, and the measles virus was only found during an autopsy, as she had no symptoms. [source] It’s possible the measles vaccine she received- yes, she had been vaccinated- was actually the reason the virus was found in her body).

The places where typically mild diseases are more likely to have complications are the places that struggle with poor sanitation and nutrition, like third world countries. When we read statements like “Measles is one of the leading causes of death among young children even though a safe and cost-effective vaccine is available,” but fail to read on and learn that 95% of these deaths occur in third world countries, we’re making decisions based on fear, not facts. (source)

Is Measles Better Than Autism?

You bet. As we can clearly see, the odds of catching measles, and especially suffering from complications, are much lower than the chance of being diagnosed with autism.

Not only that, but once you get over measles, you move on in better health. Autism can have lifelong implications for both sufferers and their families.

It’s time we stop taking chances with our children’s health and making decisions based on well-calculated propaganda. Look at the facts and make the best choices for your kids based on the real risks, not hyped-up figures and half-truths.

Do you think measles is better than autism? Share so your friends can read the facts too.