Asking People to Vaccinate for Others is Unethical |
AD 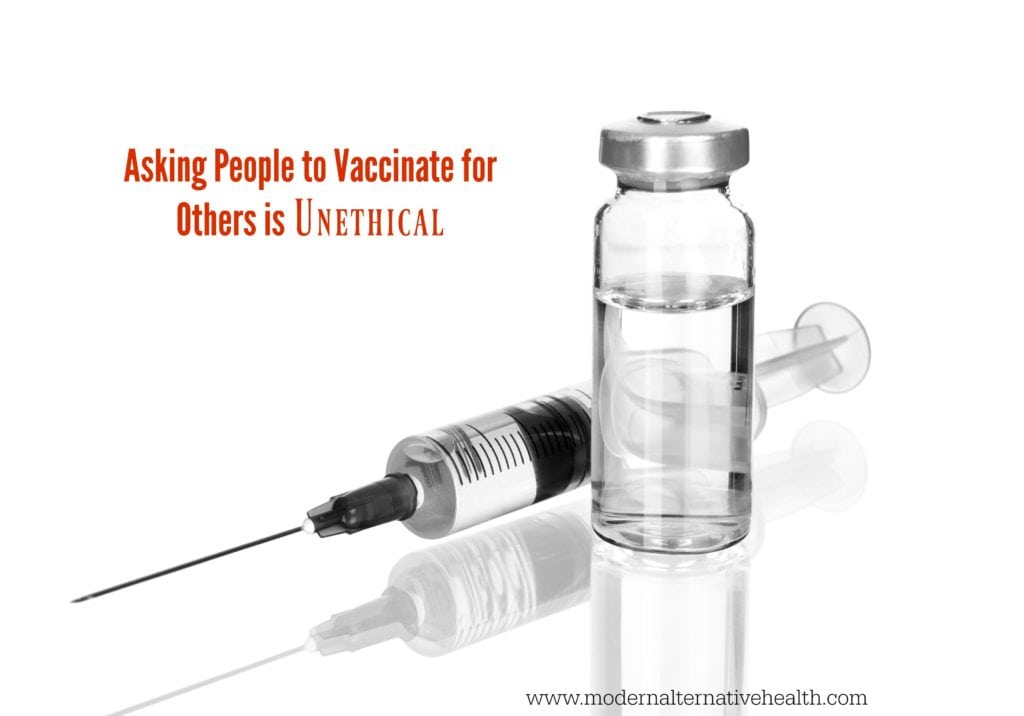 Asking People to Vaccinate for Others is Unethical It just needs to be said right now.  (Seriously — stop asking people to vaccinate for others.  If you’re unsure why we’re so adamant about vaccines, check out our Vaccine Education page.)

We (the medical freedom advocates) have gone back and forth with the forced-medical-care people for years now on this issue.  Their position is that you must vaccinate to protect society.  They’re looking at it as a collective issue, and they invoke herd immunity.  They then call people who refuse to vaccinate selfish, for refusing to toe the line and protect the herd.

And then, they say: “Your rights end where another’s begin.”

Absolutely I agree with that last point.  But this part on who has what rights, they’re a little fuzzy on that.  It’s time to get clear.

Asking People to Vaccinate for Others is Unethical

Our most basic rights are to our own bodies.  We decide what we eat…where we go…what we do.  No one else has the right to interfere with our bodies — unless, of course, we have interfered with their bodies, and they are defending themselves.  And in that case, it must be an immediate and obvious threat, not a future potential threat.  We couldn’t, for example, shoot someone because they “looked at me funny and I was worried they might hurt me,” but we could shoot someone who was physically attacking us.

The idea that we need to vaccinate for others’ sake is predicated on the idea that not vaccinating may, someday, inadvertently hurt another person.  Therefore, we must take steps to stop that from happening.

First, “inadvertently” and “potentially” are not strong enough reasons to compel anyone to do anything.  We might someday get behind the wheel of a car while drunk and hurt someone else, but the idea that it could happen isn’t enough to take away our driver’s license.  Even if someone did drive drunk, and got caught, their license would be taken and they would be arrested — because they consciously chose to get behind that wheel.  It wasn’t inadvertent.

We simply don’t punish people for things they “may” do someday, without realizing it.  We can’t.  We could basically punish everyone for everything at that point, and it’s simply not feasible.

Second, we may make others sick.  But the vast majority of the time, the illnesses will be things that we don’t vaccinate for anyway — and that’s really not different.  This is simply a risk of living in society with others.  (And, there’s also the risk of becoming a carrier of pertussis if you’re vaccinated and run across it in public, so you can spread it even if you don’t have it and “did your duty” by getting vaccinated.)  It doesn’t make sense, obviously to ask people to vaccinate for others.

Third, not being vaccinated poses relatively little — usually no — risk to others.  It’s a rare circumstance for someone to actually run across a disease, and not know it, and go out in public to spread it.  It happens (the media makes a big deal every time it does), but it’s rare.  And the usual outcome in these circumstances is that most people don’t get sick, and the ones that do, recover with no adverse effects.

In contrast, vaccinating does pose a substantial risk to the individual who is receiving it.  Whether you believe that the risk is “one in a million” or far more common (data shows it’s far more common), it’s still a greater risk than someone randomly going out in public with a disease, making someone else sick, and that other person suffering permanent complications or death. Your Rights End Where Another’s Begin

It’s the ultimate in selfishness to demand that someone else take on the risk of vaccinating, to protect you.  Where your own body ends, so do your rights.  Interfering with another’s body in this manner is extremely unethical, and borders on abuse — if forced.  You can’t ask people to vaccinate for others.

There is simply no other way about this.  There is no argument for taking away another’s rights to bodily autonomy for “protection” for others.

Ultimately, it is every person’s responsibility to protect themselves as best they can.  It will not always be perfect.  In life, sometimes others will negatively impact you, and sometimes you will negatively impact others.  It’s just the way it is.  But it is far worse to try to force someone into something to possibly, someday, maybe, protect you.

Back to School Vaccine Rights

The truth is, in all but three states, you do not legally have to.  Except in WV, MS, and CA, you can use a religious exemption to opt out.  Nearly 20 states also have a philosophical exemption that you can use.  All 50 states have a medical exemption.

Please visit the National Vaccine Information Center to learn more about your state’s laws and exercising your rights.

Be sure to check out our vaccine education tab to learn more about vaccines!

Do you think asking people to vaccinate for others is unethical?