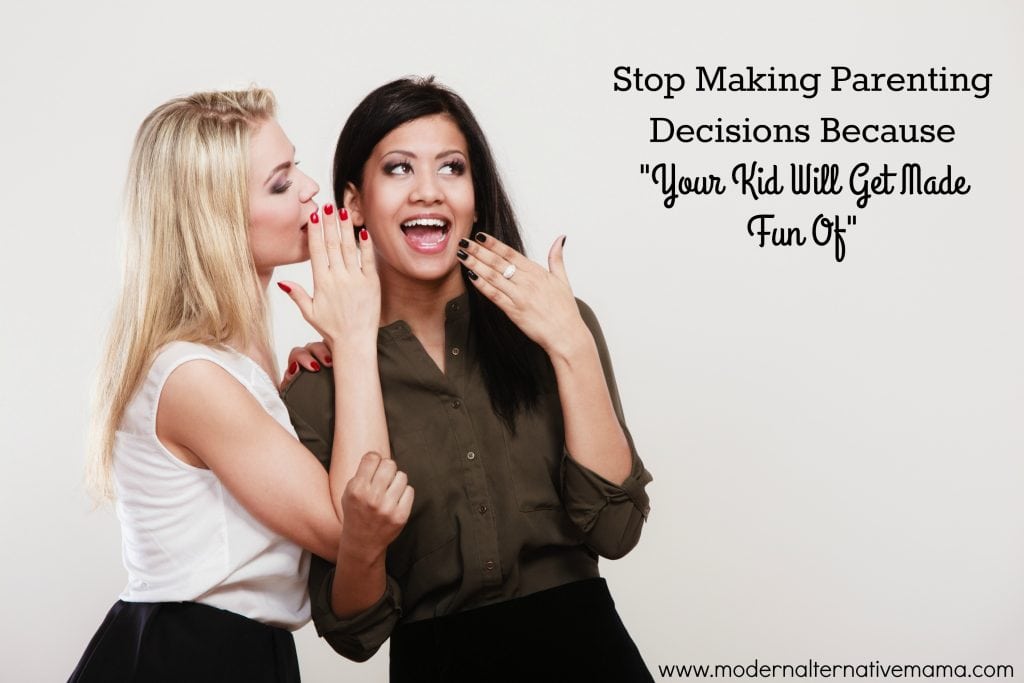 I’m in a lot of groups that are advocacy-based.  These groups promote things like vaccine choice, keeping boys intact, breastfeeding, etc.

Naturally, a lot of people ask for help in how to explain their choices.  One objection that often comes up, usually in relation to baby boys being intact, extended car seat use, or extended breastfeeding, is “Your kid will get made fun of!”

I don’t think we really realize what we’re saying when we say that.

I think that people actually mean, “Kids can be pretty mean, and immature, and by letting your kid do this ‘different’ thing, you’re opening them up to curiosity and possibly teasing, and we don’t want your kid to get hurt.”  They really do mean well.

But this is part of the victim shaming and blaming that our society likes to do.  If you don’t want your kid to get made fun of, don’t let them stand out from the crowd!  What kind of message is that?

We tell kids they should be themselves.  That it’s good to be unique.  That being different is okay.  And then, we turn around and say that they’ll get made fun of for being different.  Just let that sink in.

It’s not cute and it’s not okay to say this.  It’s not okay to say that kids shouldn’t be themselves or shouldn’t be unique because “they’ll get made fun of,” because that is prioritizing the rights of bullies over the rights of a child just to be who they are.  Why should bullies get to force a child to be something they’re not?  Because that’s what happens if you make a decision, or “tone it down” to avoid teasing.

This is the worst reason ever for making a parenting decision.  Because you care more about the opinion of children who might bully your child than you do about what’s really right for your child.

The next time someone says this to you, flip it right on its head.

That is the right answer.  Rather than making parenting decisions so our children will ‘fit in,’ we should be teaching our children not to bully those who are different.

Sadly, we still have this view that everyone should fit in and be the same, even as we pretend to celebrate differences.  We excuse teasing and bullying if the person targeted did something unusual to “bring it on themselves” (i.e. victim blaming) and we, adults, still engage in it!

Maybe it’s (supposedly) light-hearted, but when we tease people for being different, our kids pick up on that.  If we’re modeling treating people well and not mocking them, our kids will usually not do it, either.

It’s time to hold bullies accountable for their actions and let them know it’s not okay.

Peoples’ individual rights are incredibly important, in my opinion.  Yet, we often ignore this.

I mentioned this in my post the other week, How to Teach Boys Not to Rape.  It doesn’t matter if someone ‘intends’ something to be nice, if someone else doesn’t like it, then it isn’t nice.  (For example, hugging someone who doesn’t want to be hugged is not okay.)

Louie C.K. once said, “If someone says that you hurt them, you don’t get to decide that you didn’t.”  The other person’s opinion of what’s been said or done matters.

What’s not okay is the people who mock those who are different.  Who are mean to others.  Who hurt others.  Any way of being is fine, until or unless it interferes with another person’s right to be.

Please join me in accepting others for who they are, where they are.  Stop making decisions based on what others will think, and ask others to stop, too, if they say these things.  We can make a difference.

Do you make parenting decisions because your kid might get made fun of?